A Forced Eviction in Shibuya: Working with Seikokai, The Anglican-Episcopal Church of Japan 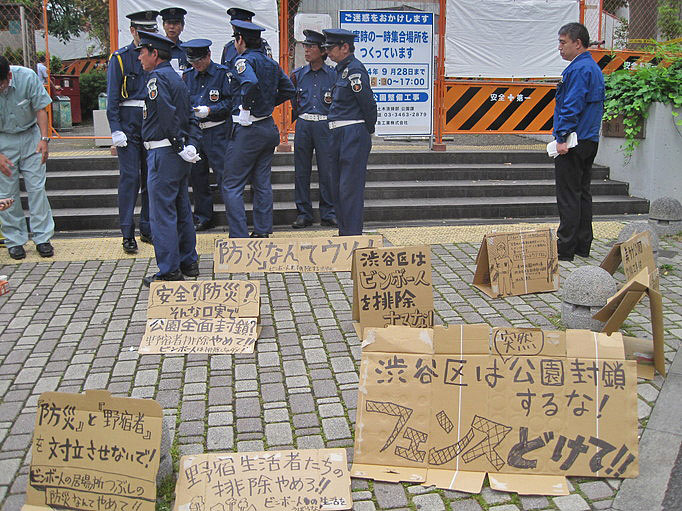 Dear friends in Germany,
This is Heiwa writing. How are you all doing?
This time, I inform you about a forced eviction against people in the streets of Shibuya Ward, Tokyo.
Please read the following statement of protest and please add your name on the online petition l made if you can. One of the groups who published this statement is Seikokai, which is The Anglican-Episcopal Church of Japan. I work together with the members every Fridays at a parking area of Shibuya Ward Office.
Thanks! May peace of God be with you always. Heiwa

Please add your name to our statement of protest!

●The Shibuya Free Association for the Subsistence and Well-Being of the Homeless (Nojiren), Seikokai Homeless Persons Support Organization of Shibuya and concerned homeless persons in Tokyo to submit the petition below to Shibuya Ward on July 11th . Anyone who wishes to join us in submitting it should meet with us at noon in front of the clock tower at the Shibuya Government Office Building.

●Shibuya Ward has already begun paperwork for administrative subrogation (a legal procedure for eviction) against tents belonging to people staying in Mitake Park. The administrative subrogation will also apply to Nojiren and its communal kitchen storage space. Shibuya Ward's actions suggest that the government is intent on denying homeless persons access to public spaces and their active networks of support.

●By adding your name to this petition, you can help us reclaim vital public spaces used regularly for rest by persons on the streets―as well as for their weekly communal kitchens. We also welcome everyone to join us on the day we formally submit the petition.

by JULY 7 to add your and/or your organization's name. There will also be a demonstration on July 7th starting at 5pm, leaving from the Harajuku side of Miyashita Park. Please join us for the demonstration as well!

At 6:30am on June 11th Mitake Park (a small public park in Tokyo's Shibuya ward) was suddenly surrounded by large numbers of guards, plain-clothes police officers, and city workers, sealed off by a fence for construction, and then closed. Over a dozen homeless persons sleeping in small structures and tents in Mitake Park―including many who had just recently been forced away from the Tokyo Metropolitan Children's Hall (which was barricaded and closed in November last year supposedly for renovation work) were both unprepared for and shocked by the sudden start of construction in the early morning hours. Signs at the park state that construction is for upkeep of an evacuation area and will last through September 28. However, no advance notice was given to persons staying in the park or to Nojiren, the organization that has used Mitake Park for 14 years for its Saturday communal kitchen. At the moment, tents and structures have not been destroyed and only residents are able to pass through the gate with permission from guards (on condition of a photo ID and bag check). However, the Shibuya Ward Parks Division has stated that all persons staying in the park are asked to leave within one week . There is no guarantee that they will not decide to carry out a forcible and potentially violent eviction.

[*The one week "deadline" for this request has come and gone but park residents, Nojiren, and concerned groups have all been firmly standing our ground. Shibuya Ward quietly began paperwork for an administrative subrogation (a legal procedure for eviction) on June 20th and we anticipate they will take action through evictions.]

Moreover, the parking lot beneath the Shibuya Ward Office―where roughly 30 persons sleep every night―was also sealed off in the morning hours of June 11th. In this instance, just as with the closure of Mitake Park, no advance notice was given to persons who regularly sleep there or to organizations such as the Seikokai Homeless Persons Support Organization of Shibuya, which shares food there every Friday. The only thing people were given was flyers, also distributed at Mitake Park, inviting them to apply for entry into the "Self-Reliance Support Center" or the social welfare system without any mention of construction about to take place or circumstances surrounding closure of the public space. Moreover, the Property Custody Section of the Finance Division, which is responsible for management of government facilities, had responded to questioning by Nojiren in late April by assuring us that although some construction would take place for maintena

nce of above-ground portions of the government building, the underground parking lot would neither need work nor be closed. As a result of this deception, numerous men and women have lost their usual safe space to sleep. A continuous stream of evictions over the past several years has dramatically reduced the number of spaces where homeless persons in Shibuya can find any rest or respite and it will take a lot of work on the part of homeless persons and their allies to uncover what feasible alternatives now exist. Several persons sleeping by a public restroom in front of the ward office were also forced from their spots at the exact same time on June 11th with only an explanation that the facility would be―not coincidentally―shut down for maintenance.

The Shibuya Ward Assembly is currently in session. However, neither the Environmental Committee with jurisdiction over Mitake Park nor the General Residents' Affairs Committee with jurisdiction over the underground lot are able to give any clear answers as to why the ward has suddenly commenced construction or what the purpose of this work is. And it appears that no advance announcements were made within the Assembly regarding these projects either. Most likely the Shibuya Ward government will deny it, but these construction projects appear to be part of an intentional effort to drive out homeless women and men from local areas.

By simultaneously shutting off these spaces to persons staying on the streets of Shibuya, the ward is robbing countless women and men of a place to sleep at night, rest during the day, and collectively prepare and eat meals. Sleep, rest, and nourishment are all vital for human life and denying anyone access to these not only threatens their survival and existence, but is also equivalent to condemning them to death. The ward government―driven by an explosion in local redevelopment (see, for example, the newly opened Shibuya Hikari commercial complex)―is deliberately attempting to drive away its poorest residents, those who live on the streets. Development cannot and should not come at the cost of human life and security. The fact that Shibuya Ward sees such policies and decisions as fair is disturbing and we are asking Shibuya residents and non-residents alike to speak out in protest.

Signed,
Concerned homeless persons in Tokyo
The Shibuya Free Association for the Subsistence and Well-Being of the Homeless (Nojiren)
Seikokai Homeless Persons Support Organization of Shibuya

Thank you for your time and support; and please share this information as widely as possible.