The Presbyterian Church in der Republic of Korea PROK 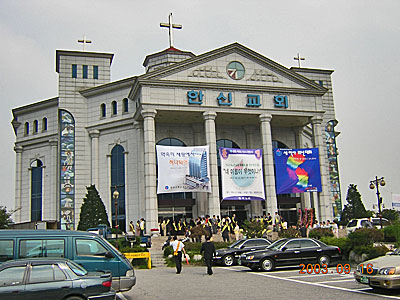 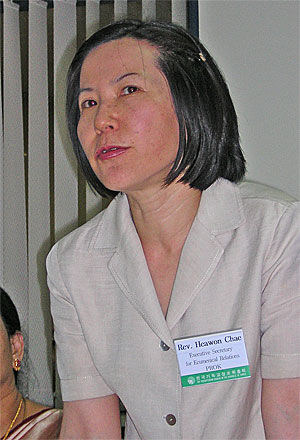 For the PROK the year 2003 is a deeply significant milestone, the year of Jubilee when we celebrate the 50th anniversary of our New History.

The PROK traces its roots to the late 1800s when the first Protestant church was established in what is now North Korea. Out of these early origins the Presbyterian Church of Korea was formally established in 1912, but in 1953 a growing conflict between theologically conservative and liberal factions resulted in the division of the church into The Presbyterian Church of Korea, or PCK, and The Presbyterian Church in the Republic of Korea, or PROK. The PROK thus began its "new history" in 1953, taking its own distinct direction of theological liberalism, active commitment to ecumenism, and prophetic involvement in the world. Particularly during the years of successive dictatorship governments the PROK gave courageous and costly witness for human rights and democracy and for peaceful reunification of the Korean peninsula.

Continuing its tradition of working for justice and peace, and guided by the vision of our 87th General Assembly (2002-2003), "United as One in the Promised New Land", the PROK takes up the challenge of our Jubilee theme, "One Church", to actively seek harmony and unity in diversity at all levels - church, nation, society, neighbours near and far. Under this theme we work with friends here and abroad to answer God's call to proclaim the Gospel to all people; to seek reconciliation and reunification of our divided nation; to advance the time when the divided church and denominations may become one united church; to heal the destroyed environment, that nature may become a new order of creation; to share with and serve neighbours in need; to change a deadly materialistic culture to a culture of life; to realize justice and peace for marginalized brothers and sisters.

The PROK is marking this special PROK New History Jubilee with various activities throughout the year.

We launched the Jubilee with a special worship service and celebration on February 10th on Cheju Island, off the southern tip of the Korean peninsula. In addition to national PROK leadership and local church members, the moderators and executive officers of all 24 presbyteries across the PROK participated. A powerful expression of our journey toward being one church in Korea's present situation of denominational divisiveness, was the participation of the Presbyterian Church of Korea (PCK). The service of holy communion was led jointly by the PROK Moderator and the PCK Vice-Moderator.

The worship service was held, significantly, in Songnae Church of Cheju Presbytery of the PROK. When differing theological and mission stances divided the Presbyterian Church in 1953 into the PCK and PROK, the local congregation of Songnae Church also divided, into Songnae Church of the PROK and Songan Church of the PCK. Conflict rending apart the two PROK and PCK congregations and presbyteries has continued over these past 50 years. In this special Jubilee service on February 10th, the participation of representatives of Songan Church and Cheju Presbytery as well as the Vice-Moderator and General Secretary of the PCK was a prayerful step towards reconciliation and healing in our journey to oneness. When the two ministers and the elders of Songan and Songnae Churches, together with presbytery and national leaders of both denominations stood side-by-side in one circle of hand-clasping unity and fellowship, we raised our hearts in thanksgiving and new promise to the God of healing and peace.

1) To work for justice and peace by restoring earth's destroyed nature to the order of God's creation, that the earth may become a true community of life.

3) To work for reconciliation and peaceful reunification of our divided people.

4) To make every effort to unite the churches separated by division into "One Church".

5) To renew the church, that it may become the whole and perfect body of Christ.

6) To build equality between men and women and harmony between generations.

7) To share and serve in a spirit of love for our neighbours.

At the launching event, two Jubilee candles and the Jubilee Proclamation were distributed to each presbytery for use in their various Jubilee events over the next months.

For the 120 days from the February 10th launching to the June 9-10 main celebration, a Jubilee Prayer was relayed across the 120 districts of the 24 PROK presbyteries. A special order of service was prepared and mailed to all the presbytery districts, so that the same prayer was raised every day for 120 days. As the special prayer service was successively carried out by one district after another, the two Jubilee prayer candles and the Jubilee Proclamation were relayed from one district to the next. Ministers, elders and lay people of each district participated in this powerful Prayer Relay.

In addition to the Prayer Relay, many presbyteries are holding special Jubilee services and events, sometimes at the regular semi-annual Presbytery meetings, in some cases at separately arranged times. On February 16th, for example, South Choongchung Presbytery held a day-long Jubilee festival of choir performances, exhibitions, worship, celebration. As many as 1,500 church people from across the presbytery participated.

On May 19th from 1:30-6:00pm an academic symposium, "Reflecting on the past and looking to our vision for the future" was held in the chapel of the Graduate School of Theology of the PROK. PROK ministers, theologians, seminary students, and lay representatives reflected on our past to seek a clear vision for our future.

On June 4-5 the PROK held a Homecoming Consultation for the PROK ecumenical co-workers commissioned to overseas partner churches. Coming together from around the globe for this event of continuing education and mission orientation and for the Jubilee, the PROK missionaries, together with executive officers of the PROK General Assembly, moderators of the presbytery overseas mission committees, representatives from local churches supporting the missionaries, mission specialists, and former missionaries studied, reflected and worshiped together under the theme "PROK Jubilee, Together with the World". After the Consultation the missionaries visited their home presbyteries to renew bonds of fellowship and share the story of their mission work and the life of the overseas churches with which they serve, before joining the main Jubilee celebration of June 9-10.

As the PROK and our main Korean partner churches struggle with the reality of the divided Korean church, we confess that we cannot play an effective role as light and salt in Korean history and society. Through this several-hour Forum we gave people from different Protestant denominations and the Catholic Church opportunity to engage in ecumenical dialogue beyond denominational and faith barriers in pursuit of achieving oneness as a Christian community.

The Forum took the form of three presentations by Korean Christian leaders on the issue of how the Korean churches may cooperate closely together. This was followed by a panel discussion by five Koreans and Mr. Lutz Drescher, Evangelisches Missionswerk in Sudwestdeutschland (EMS). In addition, Rev. Bill Mahood, former Moderator of the United Reformed Church, shared the URC experience of achieving unity and being united.

"United As One In The Promised New Land"
June 10, Chonan City
This all-day celebration under the theme of the PROK 87th General Assembly (2002-2003) took the form of:
- a marketplace of exhibitions of church history and life
- worship: opening procession of candles carried by Korean church leaders and international guests; representative greetings from Korean and international guests
- cultural performances, prayer, singing......

After the main celebration of June 9-10, the program on June 11th was specifically for our international guests, to allow opportunity for close sharing and discussion and fellowship. In the morning we gathered together for discussion, chaired by Rev. Dr. Jong-Wha Park, past General Secretary of the PROK and currently senior minister of Kyoungdong Church. Greetings were given by Rev. Dae-Shik Kim, Chairperson, PROK Overseas Mission Committee.
In this discussion we invited our international guests to
- comment on the Jubilee celebration and their participation in it;
- give comments, suggestions, advice to the PROK in our journey into the future and towards church unity;
- comment on the partnership between their church and PROK and how they would like it to develop further

In the afternoon some international guests continued the morning's discussion with Rev. Dr. Jong-Wha Park and Rev. Chae Heawon, and others took the opportunity for an experience of cultural exposure. In the evening, dinner was hosted by the Presbyterian Church of Korea (PCK).