Forum for Korea (2010): Urging the government to support humanitarian aid

It was reported that the North Korean city of Sinuiju was struck by severe flood damage when the lower course of the Amnok (Yalu) River overflowed due to heavy rainfall started from August 7th, and in areas besides Sinuiju, lots of lives, homes, roads, and approximate 2458 ha of farmland are lost. Lot of people in North Korea who is already faced with severe food shortage is becoming vulnerable to death, and therefore North Korean government has unexpectedly requested the UN for emergency aid.

The NCCK had already urged our government as well as international society to support people in the North with necessary goods and food for their life on the principle of humanism on 5th of August. Now it, facing with the report of flood damage, urges again our government to support people victimized beside Shineuijoo with the excess stock of rice of South Korea before the full moon harvest season.

This year the expected amount of product is 4,810,000 tons and now we have 4,200,000 tons of rice in excess stock including rice produced by 2004, and therefore some part of the amount is getting rotten. According to this situation, the excess rice will be over 2,500,000 tons in the next year, and local governments are making every effort to find measures for expansion of consumption of rice by the harvest season and to adjust supply and demand. For this, it is expected that it costs a lot of millions. Even it is mentioned that the excess rice could be used for animal food.

Even in this moment when the North and South relation is getting more blocked since the Cheonan incident, to support rice to our brothers and sisters in the North who are starving due to the recent severe flood damage is one of our responsibility as one nation on humanitarian dimension. It could be an opportunity for our farming economy to be helped through sending the excess rice to the North.

We expect that through supporting humanitarian aid to people in the North suffering by severe flood it could be an opportunity for our government to recover its trust as one nation, and peace and reunification of this nation could be achieved on the basis of love, not of ideology. 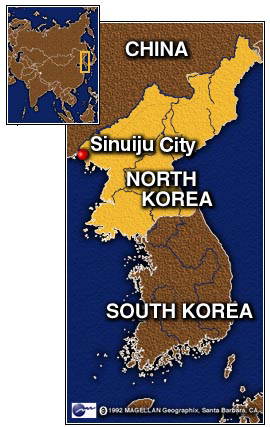 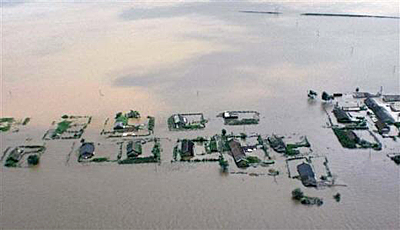 The North Korean city of Sinuiju was struck by severe flood damage when the lower course of the Amnok (Yalu) River overflowed due to heavy rainfall on the border region between North Korea and China.

In a report Sunday, North Koreas Korea Central News Agency (KCNA) stated, Road traffic was paralyzed and many individuals suffered damages when heavy rainfall in Northeast China on Thursday and Friday (reaching a maximum of 597mm) led to rapidly rising water levels on the Amnok River, causing water to instantaneously top the levee and rush toward downtown Sinuiju.

The report also said, Due to the heavy flow of water that struck before any measures could be taken, the base areas where damage was suffered, the villages of Sangdan, Hadan, and Taji in Sinuiju City, Soho village in Uiju County, and Ojok and Maksa Islands, were completely inundated, leaving only the rooftops of single-story structures visible.

Sangdan and Hadan villages are subdivisions of Wihwa Island in the Amnok River north of Sinuiju, while Taji village is an island located below Wihwa Island. The agency did not disclose any information about fatalities.


Chinas Xinhua News Agency reported Saturday that at Dandong, which sits opposite Sinuiju on the Amnok River, water was measured as passing at the rate of 28,000 cubic meters per second, making it the second largest flood in the Amnok River basin since the Peoples Republic of China was founded in 1949.

I contacted people in Sinuiju, and they said that most of the houses and farmland there were underwater, said a Dandong resident engaged in trade with North Korea. There is an embankment on the Dandong side, but over in Suinju they have poor flood prevention devices like levees, so the damages are probably substantial.

The Korea NGO Council for Cooperation with North Korea, an organization encompassing 56 groups engaged in humanitarian aid to North Korea, plans to meet with officials from North Koreas National Reconciliation Council (NRC) in the Chinese city of Shenyang this week to discuss plans for aiding North Koreans affected by the flooding. Due to continuous heavy rains since last month, North Korea has suffered inundation in areas besides Sinuiju, including 5,500 homes and approximate 146,771,600 square meters of farmland. The parties initially planned to meet on Aug. 22 and 23, but the NRC requested a postponement due to internal factors. If the meeting does take place, it will be the first inter-Korean contact since the May 24 measures that fully suspended all exchange and trade with North Korea in the wake of the Cheonan sinking.

Meanwhile, it was confirmed that former North Korean Prime Minister Pak Pong-ju, who lost his seat due to party and military objections after his attempt to pursue economic reforms in North Korea in the early to mid-2000s, was reinstated as a first vice minister of the Workers Party of Korea.

In a report Saturday on a briefing session held at Pyongyangs Peoples Palace of Culture on Friday to commemorate the 50th anniversary of North Koreas top restaurant Okryukwan, which is famed for its Pyongyang-style naengmyeon noodles, North Koreas Korean Central Broadcating Station stated, Pak Pong-ju, a first vice minister in the Workers Party of Korea(WPK) Central Committee, was in attendance.

The report didnt name the department to which Pak was appointed, but the only specialized offices in economic affairs under the Central Committee are the planning and finance department and the light industry department.

The confirmation of Paks rehabilitated status by North Korean media signifies a noteworthy trend in terms of changes in North Korean economic policy, as it comes on the heels of North Koreas failed currency reforms on Nov. 30 of last year and the subsequent replacement of WPK planning and finance department head Pak Nam-gi, who led the effort at the working level. Pak Pong-ju is known as a reform-oriented economic expert who is aware of the situation on the scene, while Pak Nam-gi was known as a socialist planned economy expert.