No War Base!
No Destruction!
Free Kim Dong-Won! 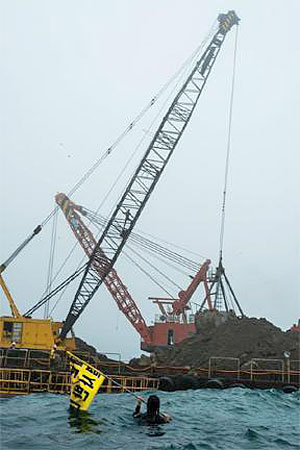 On June 30th, people protested a dredging barge which was operating illegally without repaired silt protectors. When it didn't stop, activist Kim Dong-Won climbed and occupied the crane on the barge for 7 hours, while others protested in the sea. Dong-Won is already on a 2-year probation since his release on Nov. 23, last year, after 94 days' imprisonment for his protest against the Jeju naval base project and illegal arrest of village mayor, Kang Dong-Kyun.
Image: Jung Da-woo-ri

On July 2, the warrant for Kim Dong-won (26) who climbed the crane on June 30, was made and on July 3, there was a hearing about whether it was valid to be issued. On the evening of July 3, the warrant issuance validity was given, which means he remains in police custody until the warrant is issued at which time he will be moved to prison. He will have one more review of the legality of his confinement while he waits for his trial but that will happen later.

In any case his efforts were very great and valuable. The day before, on June 29, an investigation committee from the Jeju provincial government came to Gangjeong and inspected the silt protectors in the sea and found that they were badly damaged like we constantly reported and complained. In response they called the naval base office and told them to stop construction twice but the navy didn't listen.

The next day, June 30, Dong-won, the SOS team, and others went to inspect and found that the silt protectors (which are supposed to surround marine construction sites in the sea), mandatory according to environmental regulations, were not repaired and the construction (destruction) was still going on. In response people tried to discuss with the workers, protested and then as a last resort, Dongwon climbed the crane, staying there for seven hours, fighting with the bad weather of fog and rain, strong wind and high waves. After his arrest, the barge left and about 20 people in kayaks, who endured the weather to be with and support him, returned back.

The next day, July 1, the dredging barge and the caisson barge came, but returned back without doing anything.

The letter also said that if they fail to follow this administrative order, then there will be an official hearing to stop all base construction and the construction supervisors and equipment operators will face strong penalties.

When even the Jeju Island government clearly acknowledges the navy's illegal construction (destruction) which is enforced in violation of environmental laws and regulations, it is quite unjust to imprison a highly conscientious young man who righteously and courageously protested such illegality and injustice. Thanks to him, the lives of many voiceless marine creatures, including the UNESCO-protected soft corals could be saved.

Even though the authorities are pushing for strong penalties and imprisonment for Dong-Won, we know that there will be many more people who will follow after him. The people will eventually win! Free Kim Dong-Won!

To see a video taken by Kim Dong-Won himself, from the crane, on June 30 visit:
http://www.youtube.com/watch?v=4IsE0a5bWr4&feature=youtu.be

You can also get more information at:
http://cafe.daum.net/peacekj/I51g/375