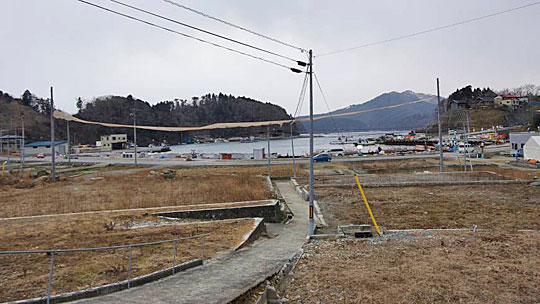 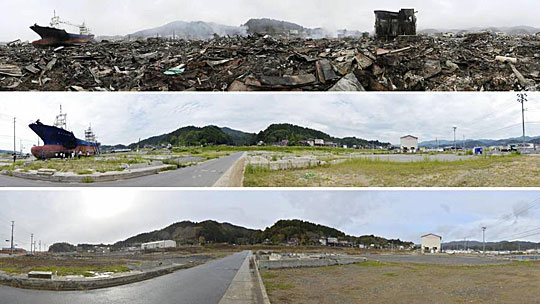 Business in Kesennuma dries up as 3/11 memory fades

KESENNUMA, MIYAGI PREF. – Yumiko Onodera is a survivor. She saw her town of Kesennuma, Miyagi Prefecture, devastated by gigantic tsunami and ensuing fire from damaged heavy oil tanks at the major fishery port on March 11, 2011.

The fire engulfed and destroyed her residential area in the Shishiori district. The following day, her neighborhood looked like a battlefield. It was covered with charred, smoking debris from shattered houses — including her own — as far as the eye could see.

A gigantic 330-ton fishing boat, the Kyotoku Maru No. 18, was carried inland over 700 meters, coming to rest near Onodera’s house.

The towering image of the grounded ship became a symbol of the tragedy of Kesennuma, a material witness to the incredible power of tsunami, not to mention an attraction for tourists who came to remember and pray for the victims of the 2011 disaster.

In October, the Kyotoku Maru was dismantled and removed. Since then, most travel agencies have stopped organizing bus tours to Kesennuma, although such tourism was seen as a way for outsiders to show sympathy for the survivors and help them financially by spending money in disaster-hit areas.

“Since the Kyotoku Maru was removed, the number of tourists has plummeted,” said Onodera, who now runs a dried food shop in a temporary structure in Shishiori.

Onodera managed to open her shop in January 2012. In the first year, she couldn’t take even a single day off as locals and tourists poured in.

Now only a few people a day come to her shop.

“Memories (of the disaster) are quickly fading away. Even some of us, victims of the disaster, have started believing tsunami will no longer come,” she said.

“But it will surely come some day in the future,” Onodera said, referring to the many tsunami that have hit the Tohoku coast over hundreds of years.

Though the troubles for the people of Tohoku are far from over, the memories of that fateful March day are fading among people elsewhere.

As of Feb. 10 this year, the catastrophe’s confirmed death toll was 15,884, while 2,636 people remain missing. Nearly 3,000 have died of causes related to the disaster, such as from the stress of living in temporary shelters, according to the central government.

About 267,000 people from Iwate, Miyagi and Fukushima prefectures still live in temporary housing.

Some 134,000 of them are from Fukushima Prefecture. Most are believed to be evacuees from contaminated areas around the crippled Fukushima No. 1 nuclear power plant.

Kesennuma, hit by 10-meter tsunami, is one of the Tohoku towns that suffered the heaviest damage.

Most of the tsunami-hit compounds in Kesennuma are still vacant.

As in many other Tohoku coastal areas, only construction companies are now in full swing as the central government injects massive funds into public works projects to rebuild key infrastructure such as damaged roads, ports and seawalls.

Many locals in Kesennuma are worried construction will stop once the emergency budgets from the central government run out.

“Most work to remove debris is more or less finished. But factories, business offices and shops have yet to come back,” said Akihiko Sugawara, head of the Kesennuma Chamber of Commerce and Industry.

“Construction work may continue, say, for 10 years, but it’s not an industry indigenous to Kesennuma. It is fishery and seafood processing industries” that will provide permanent jobs and a sustainable recovery in Kesennuma, Sugawara said.

The road ahead looks rough for Kesennuma, once one of the biggest fishing ports in the Tohoku region.

Its main fish market facilities were damaged, and all the seafood processing factories in its neighborhood were washed away.

Due to a shortage of cold storage and seafood processing facilities, this year’s fish hauls at Kesennuma are still only about 60 percent of pre-disaster levels.

“We couldn’t ship products for long after the disaster, and we lost customers like supermarkets during that period. It’s very difficult to regain sales channels because other (rival) businesses have already taken those positions,” said Naomitsu Onodera, an official at Kesennuma Fishery Processor’s Cooperative Association.

Public works, most notably to remove debris, once brought fairly lucrative jobs to Kesennuma, paying ¥9,000 to ¥10,000 a day. But most of these temporary jobs are now gone, and many locals are worried about their children’s future, said a 55-year-old worker at a newspaper delivery shop in Kesennuma, who agreed only to give his nickname, Mittsu.

“We may be OK, but we’re worried about our children and grandchildren,” he said.

“What we really need are stable jobs, such as those in the fishery and seafood industry. Without that, I don’t think a real ‘recovery’ will ever come to Kesennuma,” Mittsu said.

But the central and local governments have seemed more interested in planning big public works projects, rather than measures to promote sustainable industries in the Tohoku region.

The central and local governments now plan to build gigantic seawalls along the coasts of Iwate, Miyagi and Fukushima prefectures, to prepare for the inevitable tsunami.

The 400 km of seawall will cover as much as 23 percent of the 1,700-km coastline of the three prefectures, according to the Kahoku Shimpo, a regional daily based in Sendai.

Construction is estimated to cost ¥850 billion. Many of the seawalls would be higher than 10 meters, and some even would top 14 meters.

Many locals believe the gigantic seawalls are mainly for the benefit of the construction industry, which they suspect of having close ties to politicians.

At the main port of Kesennuma, a planned 5.1-meter seawall would totally block views of the ocean from central Kesennuma.

“If the seawall is too high, people (at the port) would feel as if they were living in a prison. Many people would desert the town and it could destroy the community,” Sugawara of the Kesennuma Chamber of Commerce and Industry said.

Locals negotiated long and hard with the prefectural government and finally agreed last month to a comprise plan to lower the seawall to 4.1 meters while raising the ground level inland by 2.8 meters.

Sugawara said the fourth year after the disaster will be “a very critical phase” for the future of Kesennuma, as is probably true for many of other disaster-hit areas in Tohoku.

“Many companies and shops are now facing the decision of whether to try to rebuild their business in Kesennuma,” he said.

If they are still without business prospects in the fourth year, many of them may give up hope and leave, Sugawara said.