Jeers, sneers, and even discriminatory remarks in the assembly hall aren’t rare in the world of Japanese politics.

But the recent sexist slurs by a ruling Liberal Democratic Party lawmaker that made headlines around the world offer Japan a chance to end this shameful tradition, an expert says.

“There is absolutely no need to jeer during an assembly session using taxpayers’ money. Lawmakers are just bored and looking for entertainment,” said Kazuhisa Kawakami, a political science professor at Meiji Gakuin University. “We taxpayers find nothing amusing about heckling.”

Jeering is a long-standing tradition in the Japanese political world, often referred to as “gijo no hana (the blossom of the assembly hall)” by some Diet members, suggesting that such comments lighten the atmosphere.

But the reality could not be more different when a lawmaker is at the microphone trying to make a point and is drowned out by shouting.

In June of last year, former Prime Minister Yoshihiko Noda was asking a question of Prime Minister Shinzo Abe at a Lower House plenary session when the LDP lawmakers’ jeers were so loud that Speaker of the House Bunmei Ibuki had to step in and demand silence. “The jeers reflect the fact that constructive discussions are not taking place inside the assembly halls. It is a sign that the lawmakers are slacking off,” Kawakami said.
Despite the recurring disruption caused by jeering, there are no specific penal regulations on a local or national level for engaging in the practice. A spokesperson for the Lower House says no one has ever been punished by the disciplinary committee for heckling. The Tokyo Metropolitan Assembly rule book declares, “Nobody shall make statements without reason or cause a commotion that obstructs proceedings.” 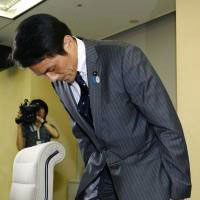 SUZUKI AkihiroBut this did not stop LDP lawmaker Akihiro Suzuki from engaging in sexist sneering when female Your Party member Ayaka Shiomura was speaking last week.

“Why don’t you get married soon?” and “Can’t you have babies?” were some of the taunts directed at Shimura in that incident, and Suzuki admitted to making some of them.

“If you made statements like that in the private sector, you would be fired immediately,” said Mitsuko Nishizaki, secretary-general of local political party Tokyo Seikatsusha Network. “Some lawmakers are unaware that you cannot make statements that slander others or violate their human rights.”

Nishizaki said many women have fallen victim to sexual harassment in local assemblies but their plight has
gone unnoticed for a long time in a male-dominated society where women are still treated as inferior.

This time, however, social media sites such as Twitter helped spread the word and the incident triggered outrage not only in Japan but around the world.

“Lawmakers need to remember that they have been elected by the people and that their actions and words are being closely observed,” said Meiji Gakuin’s Kawakami.

A Tokyo assemblywoman subjected to sexist taunts by male colleagues last week said Tuesday the capital’s legislative body needs to be reformed so that the voices of women can be heard.

“A local-level assembly like the Tokyo Metropolitan Assembly is not a friendly place for women to work, and it doesn’t make use of women’s dynamism,” Ayaka Shiomura, a member of Your Party, told a packed Foreign Correspondents’ Club of Japan in Tokyo.

Shiomura said it was important to increase the number of female lawmakers in order to make policies beneficial to women a reality. The 35-year-old assemblywoman said she backs Prime Minister Shinzo Abe’s policy of making Japan more women-friendly.

“I place my hope in Prime Minister Abe” to create a society that embraces various voices, she said. In a blog launched Tuesday by the Cabinet Office to promote the active participation of women in society, Abe, who is also president of the Liberal Democratic Party, said, “If women shine, Japan will be brighter and brighter.”

Shiomura said that in her year in the assembly she has seen how men set the norm for how things proceed. “Such an environment probably caused the incident this time,” she said. “The atmosphere at the assembly allows men to express what is on their minds.” Shiomura said she would take steps to prevent a recurrence of sexist ridicule in the assembly.

“First of all, I hope those who uttered such jeers will come forward,” she said, adding a legal complaint would be a “real last resort.”

Akihiro Suzuki, an assemblyman from the LDP, admitted shouting at Shiomura, “Why don’t you get married soon?” while she spoke at a session. He publicly apologized to her on Monday, five days after the taunt, which sparked public outrage both at home and abroad. Suzuki offered to quit the LDP group in the assembly but told reporters that he would continue as a metropolitan assembly member. Suzuki admitted to making the first remark but denied having made another controversial remark, “Can’t you have babies?”

A group of Your Party members in the assembly has announced it will commission an analysis of a recording of the sexist taunts leveled at Shiomura in a bid to identify the voices. However, they admitted the effort might be hampered by the poor quality of the recording.

“I want whoever made the remark to come forward. If that’s difficult, I want each parliamentary group to conduct a detailed investigation into the matter,” said Minoru Morozumi, secretary-general of the group.

Meanwhile, police said Monday that about 20 raw eggs had been hurled at the entrance to Suzuki’s Ota Ward office. Early Tuesday, a man in his 50s turned himself in to police, allegedly telling them, “I did it.” The police are investigating his claim. A taxi driver who witnessed the incident said a man who was shouting incomprehensibly took eggs from a package one by one and threw them at the office entrance.

Harassment rife in local assemblies
Until Tokyo attack, victims have suffered in silence

The sexist taunting of a female politician during a recent session of the Tokyo Metropolitan Assembly drew rapid condemnation from some quarters, but little disbelief.

The problem is long-running and many victims tend to accept it and suffer in silence, some assembly members say. Mitsuko Nishizaki, secretary-general of the Tokyo Seikatsusha Network political party, told The Japan Times that sneering, mockery and even overt sexual harassment is routine and often goes unreported.

In 2010, she said, a fellow assembly member shouted that Nishizaki “must enjoy being groped” when she voted against revising a youth ordinance to regulate extreme sexual images in manga and anime. “It is difficult to address the jeers as an issue at the assembly meeting because you need to identify who made the remarks in order to initiate disciplinary measures,” Nishizaki said. “Unfortunately, I had to swallow my humiliation that time. There are many people like that.”

Yuki Mizuno, 31, a member of the Abiko Municipal Assembly in Chiba Prefecture, said fellow lawmakers had bullied and sexually harassed her on several occasions, with jeers such as, “You can’t get married.”

Mizuno also recalled being humiliated by a fellow female lawmaker. During a session in the assembly hall a year ago, the woman called out in a loud voice that she could see Mizuno’s underwear line and asked, “Are you menstruating today?” “I’ve experienced pretty horrible bullying and sexual harassment and I think that there are many more cases,” said Mizuno, who lived in the U.S. as a child.

“The treatment of women as inferior to men is still strong in Japan’s political world and I think that Japan has fallen way behind other countries.”

Nobuko Nakamura, a member of the Nakano Municipal Assembly in Tokyo, said on Twitter last week that she has been “told more than 100 times to quit as an assembly member and get married.” “I think many female law-makers have had similar experiences and that’s why we must change the current state of politics,” Nakamura tweeted.

Liberal Democratic Party member Akihiro Suzuki admitted to some of the sexist sneering in the Tokyo assembly last week, and issued a public apology to the victim, Your Party lawmaker Ayaka Shiomura.

The incident came at a time when Prime Minister Shinzo Abe, the LDP president, is pushing for greater inclusion of women in the workplace as a key part of his growth strategy. “Even if the policy is to be implemented on a national level, it lacks credibility if the local members don’t have the same awareness. And if that’s the case, I think this growth strategy is just wishful thinking,” Mizuno said.

A member of the Tokyo Metropolitan Assembly said Thursday she was hurt by sexist remarks made by male politicians during a session the previous day in which she was ridiculed for being unmarried and lacking children.

The remarks, allegedly uttered by members of the ruling Liberal Democratic Party, come at a time when Prime Minister Shinzo Abe has vowed to make corporate Japan more women-friendly.

The comments were made when assembly member Ayaka Shiomura of Your Party took the stage Wednesday to raise the issue of increasingly delayed marriage and childbirth among women in Tokyo. Noting that more women are struggling to cope with pregnancy and child-rearing due to a lack of public support, Shiomura said the metropolitan government should beef up its efforts to make society more amenable to women.

As she was doing so, a man said, “before you make accusations like that, you should hurry and get married yourself.” Shocked by the comment, Shiomura stopped in midsentence, managing only a wry smile as the assembly erupted in fits of male laughter. “I grew sadder and sadder as I continued my questions,” she told reporters Thursday.

According to Shun Otokita — a Your Party-endorsed member who was present at the session — a second voice then chimed in with: “Hey, why don’t you give birth to a baby yourself?” “Underlying such comments, I think, is their belief that a woman can only stand up and speak for (prospective mothers) after she has experienced childbirth herself. Without that experience, a woman has only half the human value that mothers have, they seem to imply,” he said, adding that those who made the remarks have yet to be tracked down.

After the session, Otokita and several other members went to speak to an LDP representative, suspecting the comments had come from that party and intending to protest the issue. But they were rebuffed after being told that no immediate action would be taken without clear evidence the remarks were made by LDP members.

The Tokyo Metropolitan Assembly has yet to identity the politicians who made the remarks. But the issue may be raised in an assemblywide meeting slated for next week, when they will have a chance to discuss whether to take further action. Since no official record of the audience remarks exists, there are no set guidelines on how they should be dealt with, according to Yuki Fukui, a spokesman for the assembly’s secretariat. Abe’s push to persuade companies to hire and promote businesswomen is a key part of the revamped “third arrow” of “Abenomics,” a package of stimulus steps and structural reform vows designed to halt deflation and boost Japan’s competitiveness.