Conference "The ways of Love" - Programm

"The ways of Love"

The extraordinary general session of the Synod of Bishops on the Family 2014 will take place in the Vatican between 5-19 October.

The Synod will discuss several themes, including domestic partnerships of “couples living without being married”, the spiritual path of remarried divorcés, same-sex unions, and the religious education of same-sex couples’ children.

The Catholic Church has finally decided to openly reflect on these issues. 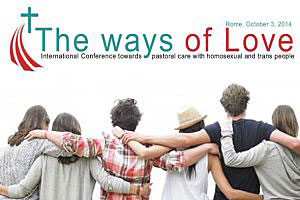 Italian Catholic associations and groups, Europeans and Americans have organized an international theological conference in Rome (Italy) a few hours ahead of the beginning of the Synod.

The conference is entitled The Ways of Love: International Conference for a Pastoral Care with Homosexual and Transsexual People. It will take place on Friday, 3 October 2014.

The event will bring Catholic theologians and clergy together with representatives of the Waldensian Church and of the civil society in order to discuss about how to renew the pastoral care with a view of fully including the homosexual and the transgender people, and the same-sex couples and families.
The issue of the Family cannot be discussed anymore without taking into reflection all types of families, including those based on same-sex love. At the conference, there will be a parent of a homosexual child.

Homosexual persons’ parents are called to engage into a path of acceptance and renewal of their thoughts. Some of them have described it like “becoming parent a second time”. The panel will talk about the vocation of homosexuals who feel to live their faith to the Catholic Church and to the Gospel.

Furthermore, the discussions will move to the issue of same-sex parents and their children. Sometimes they were born from a previous marriage. Some others are the fruits of a choice matured within the couple itself. These children have the right to receive the Faith formation and the sacraments within their communities.

The panelists will also talk about all those homosexual and transgender people who have not been able to build up a stable relationship and live their lives in a sense of abandonment and loneliness. The conference will also be the chance to talk about the mixed feelings of bitterness and delusion or sometimes encouragement of those wives and husbands of homosexual people who felt they could not stand a life denying themselves in a marriage they could not bear anymore and decided to leave their families.

The conference will be facilitated by Marco Politi, journalist and author and one of the most active vaticanists (Il Fatto Quotidiano, Il Messaggero, Repubblica, ABC, CNN, BBC). The other panelists will be:

Msgr. Geoffrey Robinson, retired Roman Catholic bishop, former auxiliary bishop of Sydney, Australia. Author of Confronting Power and Sex in the Catholic Church about the teaching of the Church on sexual morality and the abuse scandals. He will provide an analysis on how the Catholic Church can undertake a path towards a new understanding of the lives and of the human relationships of LGBT people;

Father James Alison, Catholic theologian and priest. Originally from the United Kingdom, he is based in Brazil and has worked extensively on homosexuality and Catholic faith, in particular on Catholic consciousness and gay consciousness. He will explain how homosexuals and transgender people can become the protagonists of a new evangelization capable to include all the diversities and to free them from the framework of oppression and discrimination still widely present in different sectors of our societies;

Rev Antonietta Potente, theologian and Dominican Italian nun based in Bolivia. She will offer a reflection on a new approach of the Gospel to the LGBT people;

Pastor Letizia Tomassone, Waldensian pastor, President of the Commission on Faith and Homosexuality of the Baptist, Methodist, and Waldensian Churches in Italy. She will tell about the path that these Churches have undertaken before openly including the LGBT people and couples;

Ms Joseanne Peregin, President of the Christian Life Community in Malta and mother of a homosexual man. She will tell about the feelings and the fears that Catholic parents may have when it comes to homosexual children;
A short video clip with interviews of Catholic gay and lesbian people will be screened. At the end, there will be the reading of an appeal for a pastoral care including homosexual and transsexual people. This letter will be delivered to the Synod of bishops.

The international conference “The Ways of Love: for a Pastoral Care with Homosexual and Transsexual People” is meant to give the Synod members the concrete proposal and the direction to take in order to fully accept the homosexual and the transsexual people with “respect, compassion, delicacy, and avoiding a label of unjust discrimination” (Catechism of the Catholic Church, para 2358).
.
“The ways of Love”. International Conference towards pastoral care with homosexual and trans people
The conference is sponsored by the European Forum of LGBT Christian Groups and financially supported by the Ministry of Education, Science and Culture of the Netherlands