Dear Reader,
dear Friends of the German East Asia Mission (DOAM)
DOAM is part of EMS and BMW since 1972. At that time both mission agencies took over relations and work in East Asia. Today DOAM still feels very much "at home" with all the partners in China, Japan, Korea, and Taiwan. Now, the General Secratary of EMS, Rev. B. Dinkelaker is going to retire by the end of this year. With his Christmas message we say thanks to all of you who continue to be engaged in the ongoing partnership between East Asia and Germany. May God's blessing come upon you and stay with you into the new year.  German East Asia Mission. 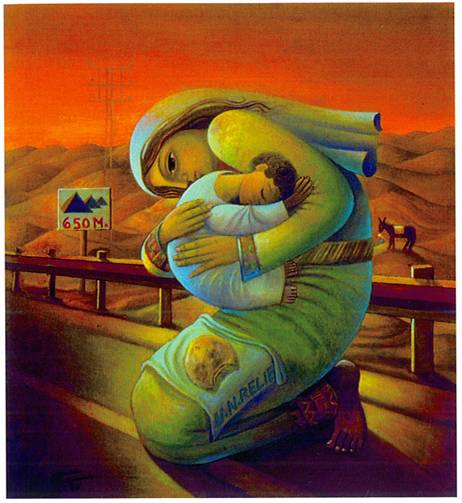 Arise, shine,
for your light has come,
and the glory of the Lord
rises upon you.

See, darkness covers the earth
and thick darkness is over the peoples,
but the Lord rises upon you
and his glory appears over you.
(Isaiah 60: 1-2)

What goes through the mind of an artist from Bethlehem when he retells the Christmas story in pictures? The Palestinian artist Sliman Mansour grew up in and near Bethlehem. The place where Jesus was born is for him not a distant or metaphorical place, it is real, near, present. Not as a tourist attraction, but in the everyday life of the inhabitants. Past and present melt into one. But who is this man, the artist Sliman Mansour?

He comes from a Greek Orthodox family and was born in 1947 in the village of Bir Zeit, near Ramallah. His father died early, his mother found work with the Lutheran World Federation in Jerusalem. So at a tender age Sliman came as a boarder to Beit Jala and attended the Lutheran School in Bethlehem. His German art teacher recognized his artistic talent, encouraged him and introduced him to the basics of European art. In 1962 at the age of 15 he won a UN Children's Painting Competition on the theme "Our hearts call for peace" and began at an early age to earn some money with portrait drawings. It was the close and loving relationship with his grandparents which introduced him on the one hand to Orthodox worship and to icon painting, whilst on the other hand his grandmother's beehives and hen coops taught him the use of clay as a modelling material. The family also sparked his interest in Palestinian literature and folk art. All these elements were to be reflected in his works.

As a young man in Jerusalem, he attracted attention with his pictures. However, the dream of studying at the Chicago Art Institute was shattered by the Six Day War in 1967. But in a part of town that has belonged to Israel since 1948, he discovered the Bezalel Academy of Art and Design. Studies there led him to make friends with Palestinian and Israeli artists. When he started to work, he then saw it as his task to develop an awareness for arts in Arab schools. In 1975 he then became co-founder of a Palestinian artists' association. But when, in 1979, he opened his own "Gallery 79" and then from 1994 exhibited critical works of art in the Al-Wasiti Art Centre, he met with opposition from the military administration in the form of closure, indictments and prison terms. Nevertheless, a number of joint Israeli-Palestinian exhibitions were organized under the motto "No to Occupation." Solidarity with critical Israeli artists became an important experience. Down to the present, Mansour has worked as an artist and teacher, and has made an outstanding contribution to traditional Palestinian handicrafts.

His art style combines different styles and materials, from portraits and caricatures to icons in the Byzantine style, abstract forms and art works made of clay and henna dyes. His motives include rural village life in Palestine as well as the harsh realities of life under occupation, prison scenes and the yearning for peace. One theme pervades all his work in many different shapes and forms: the woman – whether playing the flute or bringing in the harvest, whether in the village or on the field, the mother carrying her child, within the city of Jerusalem, recognizable as a Palestinian by her dress.

Thus the picture "Flight to Egypt", painted in 1984, is completely dominated by the stooping, kneeling woman holding her sleeping child in her arms. The pale colour depicts a bleak landscape. A desert-like mountain landscape and a yellow sky extend into the endless distance. The lone donkey in the background is the only living creature. Joseph, her husband, is nowhere to be seen. Mary, the woman, is kneeling barefoot in front of the guard rail of a modern, paved highway, and an electricity pylon is visible. We are in the present. A sign with three pyramids shows the way to Egypt – but they could also be tents, symbol of a refugee camp. The cloth on her knees comes from UN relief supplies. The woman kneeling here is not a beggar, because she already has her basic needs. She is on her knees, but not as a servile supplicant. This is a woman with her child, claiming space in the middle of a highway. She is wearing a blue dress, the symbol of Mary's position and dignity, and the borders are embroidered in the Palestinian tradition. The colour is faded, consistent with the yellow desert, like the headscarf blowing in the hot desert wind. But in this hostile environment she makes her stand. Her stooping pose and the expression on her face express bleakness, but not dismay. She is protecting her child, who is sound asleep. And she forces those coming up the road to stop. "Look at me! Take notice of me!" This Mary stands for all women who are refugees, victims of war, of violence, of displacement. And yet she is not just a victim. In the apparent humility lies strength, the will to live, bearing and sustaining weak and vulnerable life, even under the most adverse conditions. It is the strength of a child's mother who holds out, even where it seems absurd, given the balance of power, and demands dignity for herself and her child. This "Flight to Egypt" is more than an escape from mortal danger. Slimans Mary looks imminent danger in the eye, as if to say: "You can take everything away from me, but not my child and not my dignity". Looking at this picture, we cannot ignore it. Is this woman annoying, is she in the way? Or do we remain standing with deep respect and high regard?

The old story of the Flight of the Holy Family to Egypt, often told sentimentally, gains an oppressive reality in Mansour's picture, it gets under our skin. And precisely for that reason it becomes a story of hope and promise. In the midst of darkness, in the middle of the hostile, feeble, wan yellowness, a light is breaking through. God's glory is revealed. Cautiously, not radiantly. Bent, but with a great inner strength. Where we would never expect to find it, where we would never think to look for it, there we encounter God, in the shape of a sleeping child in the arms of his struggling mother, who has no other weapon than her own self, her claim to life, and her determination to protect the newly born life. It is the same Mary who had sung the bold Magnificat after the Annunciation of her child's birth, the song of God's partiality to the poor; the same Mary, who accompanied the entire life of her son as a witness, even to the cross.

Sliman Mansour's Mary is portrayed as a Palestinian woman, but she is at the same time a Syrian, Afghan, Sudanese or Mexican woman, seeking refuge from violence, or a woman from the Ukraine, Sri Lanka or the Philippines, trying to survive in Germany, Korea or Hong Kong. She is the woman who is seemingly powerless to resist those with power, yet she embodies resilient and stable strength and hope. In the dim twilight, in the middle of the barren desert the promise of the prophet is secretly proclaimed: "Arise, shine, for your light has come." This hope sustains people all over the world. This vulnerable refugee child, securely protected by his mother in this picture, shows the reason for their hope, expressed in the message: "The Lord rises upon you and his glory appears over you."

With this picture I say farewell to you on my way to early retirement. I hope that like Sliman Mansour you may discover in the Christmas story the power of God that is "made perfect in weakness".

With sincere thanks for many years of companionship, and with warm regards,