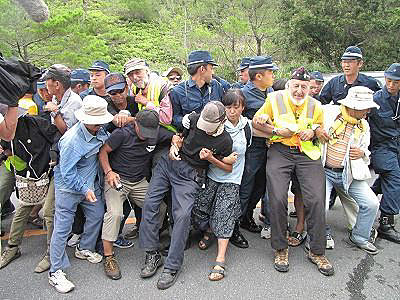 September 1, 2016 Ryukyu Shimpo
[Helipad coverage team] From 10:25 to 10:55 on the morning of September 1, the Okinawa Defense Bureau carried ten dump trucks of gravel through the gate to the N1 zone, one of the planned sites where new helipads are to be constructed as part of the plan to build new helipads (helicopter takeoff and landing strips) in the U.S. military’s Northern Training Area, which spans Higashi Village and Kunigami Village. Approximately 80 protesters opposing the construction engaged in actions to prevent vehicles carrying workers and the dump trucks from entering the N1 gate, stopping the vehicles along Prefectural Road 70 and engaging in sit-in actions. These actions delayed the work roughly two hours.

More than 200 police and riot squad members forcibly removed the sit-in protesters one by one. For roughly two hours, the police blocked the road and otherwise restricted traffic at multiple locations along Prefectural Road 70 in Takae, Higashi Village. Amidst fierce clashes between police and protesters, one protester had to be carried away in an ambulance when he began to feel unwell.

On September 1, it became procedurally possible to commence work on new helipads at the H and G zone locations. Therefore, it was thought that protesters’ tents might be removed at the so-called area “behind N1” in conjunction with the commencement of construction, and thus protesters guarded the tents throughout the night, remaining alert. The tents were not removed.

On September 1, 51 members of the Uruma branch of the All Okinawa Council came to Takae by bus, and so nearly twice the usual number of protesters engaged in actions to stop the dump trucks. Douglas Lummis (80) and five other members of the Ryukyu-Okinawa Branch of Veterans for Peace (VFP), a group made up of military veterans, also participated in the protests.

Around 6:30 on the morning of September 1, Hiroji Yamashiro of the Okinawa Peace Movement Center called upon people gathered at a rally in the area behind N1: “Now, construction might also start at the H and G zone locations. Let’s keep up the protest movement at those locations in addition to N1 and stop the construction from moving forward!”