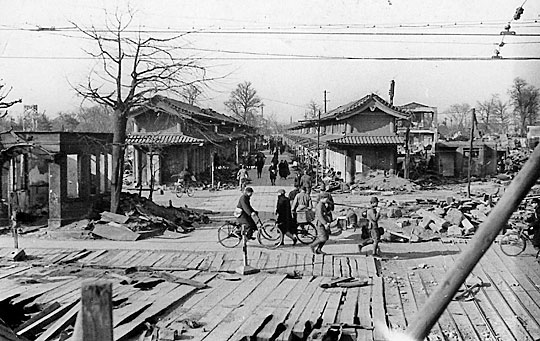 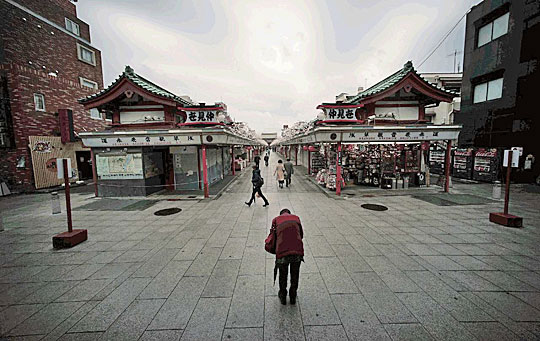 Survivors commute through destroyed Nakamise shopping street after Tokyo firebombing on March 19, 1945. (EUGENE HOSHIKO, THE CENTER OF THE TOKYO RAIDS AND WAR DAMAGE/AP)


TOKYO — Japan mourned Tuesday for the 105,400 people killed in a single night 70 years ago, when U.S. B-29 bombers obliterated much of Tokyo in the deadliest conventional bomb attack ever.

Prime Minister Shinzo Abe bowed in a somber ceremony held in a downtown temple that was built to commemorate deaths from a 1923 earthquake, but is also used as a memorial for the victims of World War II bombings.

"With the lessons of the atrocities of war etched deeply in our hearts, we must humbly face the past and do our utmost to contribute to world peace," said Abe, surrounded by white floral wreaths and chrysanthemums, as a group of dignitaries, survivors and other residents looked on.

The March 10, 1945, attack on Tokyo killed more people than the Aug. 9 atomic bombing of Nagasaki. The death toll was on par with the Aug. 6 atomic attack on Hiroshima.

But the firebombing and similar ones that followed in more than 60 other Japanese cities have received little attention, eclipsed by the atomic bombings and Japan's postwar rush to rebuild. The only formal public monument for the Tokyo victims is a modest floral memorial near the temple where Tuesday's ceremony was held.

Haruyo Nihei, just 8 when the bombs fell, was among many survivors who kept silent. A half-century passed before she even shared her experiences with her own son.

"Our parents would just say, `That's a different era,' " Nihei said. "They wouldn't talk about it. And I figured my own family wouldn't understand."

Now, as their numbers dwindle, survivors are determined to tell their stories while they still can.

"There were plenty of small factories, but this area was chosen specifically because it was easy to burn," says historian Masahiko Yamabe, who was born just months after the war's end.

Another departure from earlier raids: the bombers flew low. 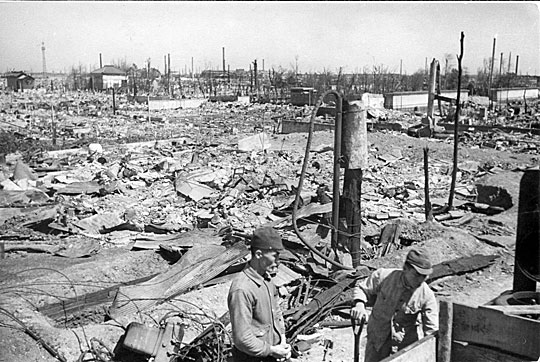 "It was as if we could reach out and touch the planes, they looked so big," said Yoshitaka Kimura, whose family's toy store in downtown Tokyo's Asakusa was destroyed. "The bombs were raining down on us. Red, and black, that's what I remember most."

Nihei, now 78, was mesmerized as she watched from a railway embankment.
"It was a blazing firestorm. I saw a baby catch fire on its mother's back, and she couldn't put out the fire. I saw a horse being led by its owner. The horse balked and the cargo on its back caught fire, then its tail, and it burned alive, as the owner just stood there and burned with it," she said.

Firefighter Isamu Kase was on duty at a train parts factory. He jumped onto a pump truck when the attack began, knowing the job was impossible.

"It was a hellish frenzy, absolutely horrible. People were just jumping into the canals to escape the inferno," said Kase, 89. He said he survived because he didn't jump in the water, but his burns were so severe he was hospitalized for 15 years.

Split-second choices like that determined who lived and who died.

Kimura, a 7-year-old, escaped the flames as he was blown into the entrance of a big department store while running toward the Sumida River, where tens of thousands of people died: burned, crushed, drowned or suffocated in the firestorm.

Masaharu Ohtake, then 13, fled his family's noodle shop with a friend. Turned back by firefighters, they headed toward Tokyo Bay and again were ordered back. The boys crouched in a factory yard, waiting as flames consumed their neighborhood.

"We saw a firetruck heaped with a mountain of bones. It was hard to understand how so many bodies could be piled up like that," said Ohtake.

Survivors speak of the hush as dawn broke over a wasteland of corpses and debris, studded by chimneys of bathhouses and small factories. Police photographer Koyo Ishikawa captured the carnage of charred bodies piled like blackened mannequins, tiny ones lying beside them.

"It was as if the world had ended," said Nihei, whose father sheltered her under his body, as others piled on top and were burned and suffocated. All her family survived.

Michiko Kiyo-oka, a 21-year-old government worker living in the Asakusa district, survived by hiding under a bridge.

"When I crawled out I was so cold, so I was warming myself near one of the piles that was still smoldering. I could see an arm. I could see nostrils. But I was numb to that by then," she said. "The smell is one that will never leave me."

Fighting to be remembered

From January 1944-August 1945, the U.S. dropped 157,000 tons of bombs on Japanese cities, according to the U.S. Strategic Bombing Survey. It estimated that 333,000 people were killed, including the 80,000 killed in the Aug. 6 Hiroshima atomic-bomb attack and 40,000 at Nagasaki three days later. Other estimates are significantly higher. Fifteen million of the 72 million Japanese were left homeless.

The bombing campaign set a military precedent for targeting civilian areas that persisted into the Korean and Vietnam wars and beyond. But the nonatomic attacks have been largely overlooked.

"Both governments, the press, media, radio, even novelists ... decided the crucial story was the atomic bomb," said Mark Selden, a Cornell University history professor. "This allowed them to avoid addressing some very important questions."

Survivors of the Tokyo firebombing feel their pain has been forgotten, by history and by the government. After the war, only veterans and victims of the atomic bombings received special support.

"We civilians had no weapons and no strength to fight," Kiyo-oka said. "We were attacked and got no compensation. I am very dissatisfied with how the government handled this."

No specific government agency handles civilian survivors of firebombings or keeps their records, because there is no legal basis for that, said Manabu Oki at the Internal Affairs and Communications Ministry.

Yamabe, the historian, said authorities "are reluctant to acknowledge civilian suffering from the wartime leaders' refusal to end the war earlier." 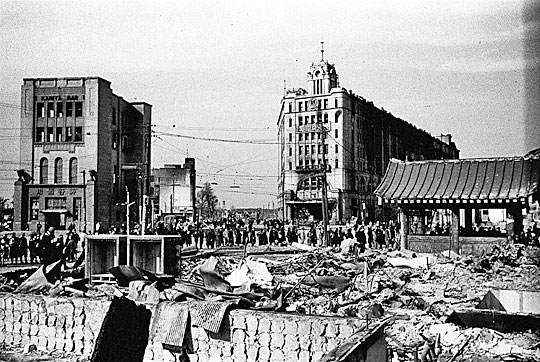 "If they don't disclose such data, it can't be discussed. If the victims remain anonymous then there's less pressure for compensation," said Yamabe, a researcher at the privately funded Tokyo Air Raid and War Damages Resource Center, Japan's main source of information about the firebombings.

Some survivors now refuse to be anonymous. Nihei often travels from the distant suburbs to the Tokyo Air Raid center to share her story with students and other visitors.

Years ago, Ohtake began walking the city to draw up guide maps of areas destroyed by the bombings - maps the resource center now uses.

"The United States went too far with the firebombing, but I don't quite understand why the Japanese government and the rest of the Japanese don't talk about this very much," he said.

"We are not just statistics. I don't think we'll still be around for the 80th anniversary," Ohtake said. "So the 70th anniversary is pretty much the last chance for us to speak up."