Looking Back at Those 111 Days in Jail

Rev. Takao Otani
pastor of the Settsutonda Church of the Kyodan and head of the Kansai Committee on Evangelism of Laborers

Together with 3 compatriots, I spent 111 days, from April 5 to July 25, 2011, in the Osaka Detention Center after being arrested and indicted on charges by the Takatsuki Police. The charges were that we had engaged in the crime of "forcible obstruction of business," a ridiculous charge based in our efforts to encourage day laborers in Kamagasaki, who have no "certificate of residence" since they have no permanent address, to go to the Haginochaya Polling Station and vote in the July 11, 2010 election. The action of organizing the workers to go and vote is a justifiable action designed to protect their rights. After all, the right to vote is guaranteed in Article 15 of the Japanese Constitution and is also included in Article 25 of the Universal Declaration of Human Rights, which the Japanese government has ratified. Thus, to be arrested for only doing that and then to be indicted and held in captivity for 111 days is something that I simply cannot accept as justifiable. At the Takatsuki Police Station, we were subjected to daily interrogation, but because the arrest was so blatantly undeserved, I refused to cooperate and maintained my silence. There was thus a "time of silence" during the 2 to 3 hours of daily interrogations that lasted until the formal indictment was made. It was a very "boring" time indeed, and it certainly did cause me a lot of undue stress. 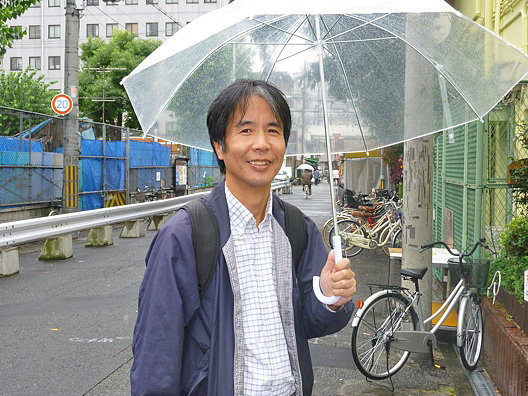 ormally indicted on April 26, 2011, and from that time were incarcerated in the Osaka Detention Center. This was just before the long "Golden Week" holidays, and since prisoners are confined to their rooms on weekends and holidays, that meant that the holidays for everyone else were especially tough on us. The room I was placed in was a single, 1.8 by 2.7 meter (6 by 9 feet) room with a simple toilet and sink, and so the first 10 days or so were really difficult in getting used to life in a detention center.

When I finally was getting adjusted to life there, the hot and muggy rainy season began. On the outside, we take for granted having an air conditioner or at least an electric fan, but at the detention center, nothing like that was allowed, and we were only provided with a hand-held fan to cool ourselves with. Additionally, we were allowed to wipe ourselves with a wet towel 3 times a day for about 5 minutes, but that was like putting a drop of water on a hot rock. Needless to say, in such conditions, it was impossible to get a good night's sleep. Our sleep time was scheduled from 9 pm until 7:30 am the next morning, but during the hot season, one simply couldn't get to sleep until early morning. There is much I could write about the treatment we received at the Osaka Detention Center, which is under the Department of Justice, concerning basic human rights, but suffice it to say that this treatment made me realize how poor an understanding the Japanese government really has of human rights.

While life in the detention center was really difficult in many ways, it certainly did provide a lot of time for reading, and so I was able to read a number of books that were passed on to me from the outside. Among those were books written by Dr. Martin Luther King Jr. on the civil rights struggle for blacks in America. I was again drawn to the speech he gave in Washington DC on Aug. 28, 1963, "I have a dream." The words that stood out the most for me were those alluding to Amos 5:24, when he said, "No, no, we are not satisfied, and we will not be satisfied until justice rolls down like waters and righteousness like a mighty stream."

We now live in Japanese society some 50 years after Rev. King's speech, and for us, the situation is similar. As I have just described, we have these conditions in which the basic voting rights of the day laborers in Kamagasaki are not respected and no thought whatsoever seems to be given to the basic human rights of those incarcerated in the Osaka Detention Center. So, that "righteous river" within Japanese society is blocked and stagnated. Thus, with strong resolve, I will continue to speak those same words that Rev. King spoke some 50 years ago. I renew my pledge to fight for the elimination of all forms of discrimination that result from that "river of justice" being blocked and stagnant and to join in solidarity with like-minded people to continue this struggle.