On Sunday, May 27th this year, police entered Kaizuka Catholic Church in Yokohama Diocese during mass without permission. NCCJ has responded to this incident with the following statement. The original Japanese documents can be downloaded below as a JPEG image.

On Sunday, May 27, 2012, six officers with the Kawasaki Rinko Police Station entered the grounds of Yokohama Diocese’s Kaizuka Catholic Church and, ignoring the protests of Father Motoyanagi, parish pastor and administrator of the church, relentlessly questioned congregants of Filipino nationality in an intimidating manner. This interrogation continued over a period of 50 minutes during which other members protested the actions, and ended when police made an arrest on parish grounds taking one congregant into custody.

At the June 21st plenary assembly of the Catholic Bishops’ Conference of Japan, a consensus was reached regarding this incident, strongly stating that “such conduct is in violation of Article 35 of the Japanese Constitution regarding provisions on illegal entry as well as infringing on religious freedom under Article 20; furthermore, this type of incident must not be repeated not only by Kawasaki Rinko Police Station, but by any police station in any prefecture” for the following reasons:

① Many believers and seekers visit the Catholic Church in order to pray, celebrate mass, etc. irrespective of nationality. In particular, Sunday mass is an especially sacred and important religious ceremony for believers.

② When believers and seekers gather for a period of peace and solemnity, preparing themselves for a celebration of mass, and the authority of the State (in the form of police officers) defies the protests of the church administrator, enters onto parish grounds and carries out questioning, it causes fear, apprehension, humiliation, anger and distress amongst congregants. This results in an environment altogether unsuitable to conducting a holy and religious ceremony. This action can be regarded as interference in religious activities by the authority of the State.

③ The church aims to be a place where all people baring burdens, even those who have committed crimes, can come without worry. Believers and others cannot visit a church with peace of mind if they are under the threat of being subjected to police questioning while nearby or on church grounds. Additionally, by not considering the religious position and vow of confidentiality made by priests and in pressuring the priest coercively through indictments of “You’re protecting a criminal then, aren’t you. Tell the suspect he better leave the grounds now,” police officers deny the religious jurisdiction of the priest and desecrate the religious activities of the Catholic Church such as the sacrament of the confessional.

From a like position of regarding religious activities on the Lord’s Day (Sunday) as “especially sacred and important,” National Christian Council in Japan fervently supports the above requests of the Catholic Bishops’ Conference, and strongly demands that such “police interference conducted against church activities on the Lord’s Day (Sunday)” is never repeated again by police or related entities. As moderator of National Christian Council in Japan, I hereby make public this statement reached by consensus at the July 3, 2012 meeting of the Executive Council. 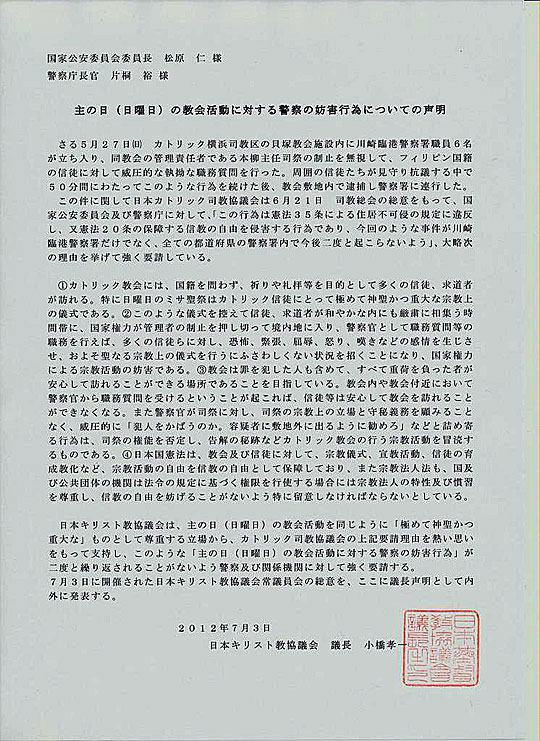