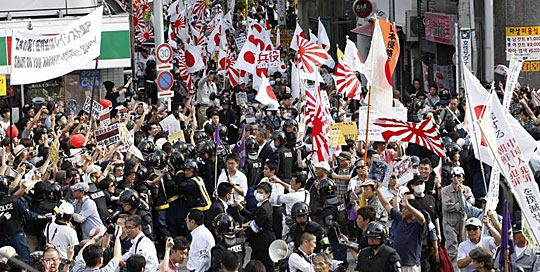 The far right that dare not speak its name: Police keep anti-Korean protesters away from anti-racist counterdemonstrators in Shinjuku, Tokyo, in June of last year. | KYODO

Last month, the BBC aired a two-part audio documentary on its World Service that featured two journalists, Mariko Oi from Japan and Liu Haining from China, discussing how their respective homelands viewed World War II, while visiting and conducting interviews in both countries.

At one point they talked to a Japanese scholar who wrote a history textbook that many believe whitewashes Japanese atrocities. Liu notes that the word “invasion” does not appear anywhere in the explanation of Japan’s involvement in the war, and the author says that since the word has a “negative” connotation, he didn’t use it to “describe the action of a country.”

An official from Yokohama, which plans to use the textbook in public schools, says it is not important to teach about such things. “Our focus is to make Japanese children proud of their country,” he says. In describing the interview afterwards, Liu breaks down in tears of rage. “Why are we debating this?” she asks.

Being Chinese, Liu has an emotional connection to the subject that affects her reporting of it, but the exchange is useful in pointing up the difference between the way foreign journalists cover Japanese right-wingers and the way Japanese journalists cover them. Tellingly, the two men interviewed would not characterize themselves as rightists, which Japanese people associate with fanatics in big trucks blaring patriotic songs. They might call themselves “conservatives,” but within Japanese society they think of their opinions as being mainstream, partly because their views aren’t challenged by the domestic media, only by academics and people associated with the “left wing.” A Japanese journalist would never refer to them as rightists, but foreign journalists might.

The distinction is about more than labels. Last fall, this newspaper’s Big In Japan column (Oct. 13) reported on tabloids running stories critical of South Korea, which has become a trend since the Liberal Democratic Party retook the reins of government in December 2012. Last month the Asahi Shimbun explored this trend, which has acquired a special name: kenchū-zōkan, which means “dislike China, hate South Korea.” So many anti-Korea, anti-China books have been published in the last year that bookstores have set up display tables for them. One store manager told the newspaper, “We sell these books next to ones that admire Japan,” as if that were only natural. Of the 10 bestselling shinsho paperbacks of 2013, three belong to the kenchū-zōkan genre.

The weeklies have also gotten in on the act. An anonymous reporter who works for one told Asahi, “We can’t stop these stories because sales are too good. It’s not like domestic political scandals. It’s foreign news, so there’s no worry about lawsuits.”

Even the left-of-center Asahi can’t deny the profitable nature of the genre, as it advertises books that slam the two countries. Recently it ran an ad for the bestseller “Bokanron,” which means “theory of stupid Korea,” published by the rival Sankei Shimbun. The ad copy claims the content is not “innuendo” but rather “the truth” about an “undemocratic society.” Asahi also regularly advertises weeklies that position their dramatic anti-Korea/China headlines prominently.

A university journalism professor points out in the Asahi article that it wasn’t the weeklies that created the trend but rather the media in general, by reporting Japan’s relation to these two countries through only their conflicts and not the wider context of “everyday exchange.” Since reporters are averse to characterizing Japanese right-wing positions as being extreme, those positions come across as being normal, even sensible.

Last week, Tokyo Shimbun ran a story about the word kyoku-u, which means “far right,” a term commonly used by foreign journalists to describe politicians such as former Tokyo Gov. Shintaro Ishihara and current Osaka Mayor Toru Hashimoto. Japanese reporters only use “kyoku-u” to describe European nationalists. What makes them far right, according to Associate Professor of Sociology Naoto Higuchi of Tokushima University, is their xenophobia: Most emerged after the Cold War ended, when there was a major westward migration in Europe. Higuchi says the anti-foreigner sentiment that has been growing in Japan — legitimized by kenchū-zōkan reporting — is xenophobic in nature, so politicians and other public figures who espouse views that fit kenchū-zōkan trends should be referred to as “far right.” However, since journalists consider the term “derogatory,” he argues, they don’t use it lest they be seen as being critical.

If they did use the word, the public might realize how radical some politicians’ views are. Higuchi traces mainstream acceptance of far-right principles to Ishihara’s speech in April 2000, during a ceremony to commemorate the founding of the Ground Self-Defense Forces, when he talked about generalized foreigners (using “sankokujin,” a derogatory term) who came to Japan illegally for the purpose of “committing brutal crimes.” Higuchi says this rhetoric went beyond the usual “Japanese-style exclusion” of outsiders in characterizing foreigners as “the enemy.” Since no one in the domestic media pointed this out, it was not considered extreme.

As conflicts flared between Japan and its two most important neighbors over territorial and historically revisionist claims — conflicts aggravated by intransigence on all sides — it was easy to provoke defensiveness on the part of the Japanese public: Why are they always picking on us? However, as Koichi Yasuda, a reporter who closely covers right-wing activities in Japan, told Tokyo Shimbun, the public does have a sense of what’s right when things go too far. Incidents of anti-Korean hate speech have lately been countered by a grass-roots movement of citizens who won’t countenance such naked, ugly xenophobia. They don’t need the media to tell them that such responses represent the worst impulses of human nature, though those impulses may not have become so virulent if the media had been more conscientious in the first place.