Thousands Protest as Japanese Government Ushers in New Age of Militarism
Turning its back on decades of pacifism, controversial 'war legislation' takes effect 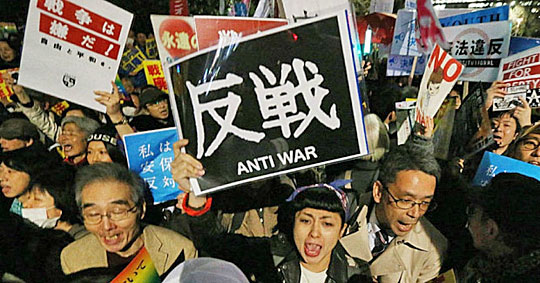 Thousands of anti-war protesters rallied outside the parliament building in Tokyo on Tuesday, railing against the Japanese government's new so-called security law which marks a historic departure from the country's decades-long pacifism.

The controversial "war legislation," a package of bills that passed parliament in September and took effect on Tuesday, reinterprets Article 9 of the country's Constitution, which renounced war as a means to settle international disputes following World War II.

Prime Minister Shinzo Abe pushed for the revisions which "expand the activities of the Self-Defense Forces (SDF) overseas, even in situations when Japan is not under direct attack,"The Asahi Shimbun reports. "The laws call for the SDF to provide greater support to the militaries of the United States and other nations anywhere in the world." ....