2012: Rights and Dignity of Migrant Workers 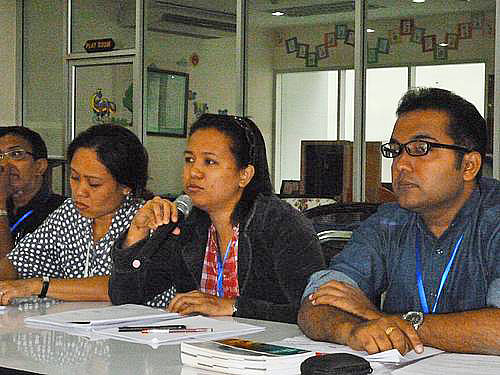 CCIA's member Mae Maureen (centre) speaking about
the rights of women migrant workers from the Philippines.

A number of women participants representing various national ecumenical councils in Asia noted that the number of female migrant workers is on the increase in the region. This trend has paved the way for exploitation and an increase in human trafficking. They were referring to several Asian countries where 95 percent of domestic migrant workers are women.

Presenters spoke about issues migrant workers face in Asia and the Arabian Gulf countries. They noted that national labour laws often do not apply to the domestic migrant workers; hence they remain an invisible workforce with little or no legal protection at all.

"The lack of legal protection makes domestic migrant workers more vulnerable to domestic servitude at the hands of recruitment and placement agencies in sending countries and ultimately at the hands of their employers," said the Rev. Yohanna Taruk in the workshop.

Taruk herself was a domestic migrant worker in Hong Kong, and now serves as a pastor of the Toraja Church in Indonesia.

The Rev. Jang Chang Weon, coordinator of the Osan Migrant Workers Centre in South Korea, said that ecumenical solidarity networks need to strengthen their advocacy efforts in protecting the rights of the migrant workers. He went on to say that "churches' mission and witness" should incorporate the concerns of migrant workers.

Despite the fact that labour migration serves the economic interests of both sending and receiving countries, most Asian countries have not yet ratified the 1990 UN convention on the rights of migrant workers, the participants observed.

"The adoption of the ILO convention on the rights of domestic workers is a breakthrough for millions of exploited domestic migrant workers, yet the implementation is a key to ensure that workers in precarious jobs have an effective access to decent work," said Dr Mathews George Chunakara, director of the CCIA. "The Philippines is the only country in Asia which has ratified the ILO Convention on Decent Work for Domestic Migrant Workers," he added.

Presenting theological references in the discussions on migrant workers, Rev. Revelation E. Velunta, pastor of the United Church of Christ in the Philippines said, "the church has always contemplated on the image of Christ who said, 'I was a stranger and you made me welcome' (Mathews 25:35)."

Velunta added that "The condition of the stranger, the migrant worker, in our midst is a challenge to the faith of all believers, who are called to protect the rights of domestic migrant workers and discover the plan God pursues for the voiceless when this condition is caused by obvious injustices."

Awareness raising was one of the priority areas identified for action by the churches. Proposals were made to sensitize congregations about the exploitation faced by migrant domestic workers; and for the CCA to initiate advocacy in Asia along with civil society organizations for the ratification of UN and ILO conventions.

The Global Ecumenical Network on Migration (GEM) will meet in Manila in November to plan its participation in the WCC 10th Assembly in Busan, Republic of Korea, in 2013, and make sure that the reality of migration and its impacts on people and churches will be addressed there in a meaningful way.

The first four days of the meeting in Manila will involve some 50 GEM representatives from six continents. It is hosted by the National Council of Churches in the Philippines (NCCP).

Through theological, spiritual, ethical and ecclesiological contextual reflection, participants will address three focal themes: "migrant workers and their families", "immigration detention", and "people dying on their journey to find a dignified life".

A day of encounter also features on the agenda of the meeting. During that day, participants will visit migration-related projects implemented by NCCP member churches.

Following the GEM meeting, a Theological Reflection on Migration will see a select group of theologians collecting final inputs to the theological statement on the phenomenon of migration and its implications to churches and the ecumenical movement that is to be brought to the WCC 10th Assembly. The 15 theologians will incorporate new theological, spiritual and ethical challenges and ecclesiological questions identified at the GEM meeting into the draft elaborated at their two previous meetings.

The Global Ecumenical Network on Migration (GEM) enables members drawn from churches, church-related organizations and ecumenical bodies working on migration to learn from each others' experiences, develop a global analysis, set priorities together and pool their resources to advocate on these issues at the United Nations and with other organizations addressing migration. The aim is to deepen understanding of global migration issues and have more impact on global policy discussions on migration.

In comparison to its predecessor, the Global Ecumenical Network on Uprooted People (GEN), the new network works more specifically on migration issues, particularly the relationship between migration, racism and xenophobia, and the effect of migration on changing ecclesial contexts.