The Parties will contribute toward the further development of peaceful and friendly international relations by strengthening their free institutions, by bringing about a better understanding of the principles upon which these institutions are founded, and by promoting conditions of stability and well-being. They will seek to eliminate conflict in their international economic policies and will encourage economic collaboration between them.

The Parties, individually and in cooperation with each other, by means of continuous and effective self-help and mutual aid will maintain and develop, subject to their constitutional provisions, their capacities to resist armed attack.

The Parties will consult together from time to time regarding the implementation of this Treaty, and, at the request of either Party, whenever the security of Japan or international peace and security in the Far East is threatened.

Each Party recognizes that an armed attack against either Party in the territories under the administration of Japan would be dangerous to its own peace and safety and declares that it would act to meet the common danger in accordance with its constitutional provisions and processes. Any such armed attack and all measures taken as a result thereof shall be immediately reported to the Security Council of the United Nations in accordance with the provisions of Article 51 of the Charter. Such measures shall be terminated when the Security Council has taken the measures necessary to restore and maintain international peace and security.

For the purpose of contributing to the security of Japan and the maintenance of international peace and security in the Far East, the United States of America is granted the use by its land, air and naval forces of facilities and areas in Japan. The use of these facilities and areas as well as the status of United States armed forces in Japan shall be governed by a separate agreement, replacing the Administrative Agreement under Article III of the Security Treaty between Japan and the United States of America, signed at Tokyo on February 28, 1952, as amended, and by such other arrangements as may be agreed upon.

This Treaty shall be ratified by Japan and the United States of America in accordance with their respective constitutional processes and will enter into force on the date on which the instruments of ratification thereof have been exchanged by them in Tokyo.

The Security Treaty between Japan and the United States of America signed at the city of San Francisco on September 8, 1951 shall expire upon the entering into force of this Treaty.

This Treaty shall remain in force until in the opinion of the Governments of Japan and the United States of America there shall have come into force such United Nations arrangements as will satisfactorily provide for the maintenance of international peace and security in the Japan area. However, after the Treaty has been in force for ten years, either Party may give notice to the other Party of its intention to terminate the Treaty, in which case the Treaty shall terminate one year after such notice has been given.

IN WITNESS WHEREOF the undersigned Plenipotentiaries have signed this Treaty.

DONE in duplicate at Washington in the Japanese and English languages, both equally authentic, this 19th day of January, 1960.

FOR THE UNITED STATES OF AMERICA: 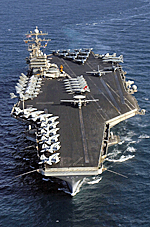