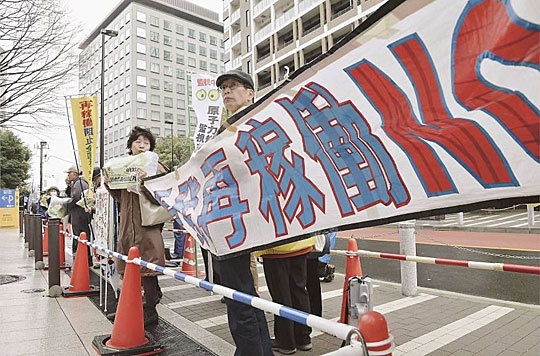 Nuclear regulators decided Thursday to prioritize safety reviews for two reactors at the Sendai plant in Kagoshima Prefecture, which could mean they are the closest in the nation to restarting.

Seventeen reactors at 10 power plants are awaiting inspection to determine whether they satisfy the safety requirements put in place in the wake of the 2011 Fukushima disaster.

The new Nuclear Regulation Authority has decided to prioritize a small number of reactors for its first swing at the assessment process.

At a formal meeting Thursday, NRA commissioners agreed that reactors 1 and 2 at the Sendai plant, operated by Kyushu Electric Power Co., are qualified to move on to the final stage of the review process.

“I understand that units 1 and 2 at the Sendai plant have cleared the major agendas (of the assessment on whether they can withstand earthquakes and tsunami), while others have not yet,” NRA Chairman Shunichi Tanaka said.

Commissioner Toyoshi Fuketa, who is in charge of checking the facilities’ safety and countermeasures for severe nuclear accidents, said he is satisfied with Kyushu Electric’s approach.

Under procedures agreed to earlier, NRA staff are expected to start drafting an assessment report on the basic policies of the reactors’ design and their operator’s contingency responses. The final document will serve as a certificate for declaring the reactors have cleared inspection.

After compiling the draft, the NRA plans to solicit public opinion from both a scientific and technical viewpoint over a period of about four weeks.

Kyushu Electric wants to restart the reactors by summer, when demand surges. But it is not clear when the reactors will actually be restarted, since it will also have to get local consent before reactivating the units.

Both of the Sendai units are pressurized water reactors, not the boiling water reactors hit by meltdowns at Fukushima No. 1. Each can generate 890,000 kilowatts.

The Sendai reactors were running when the Great East Japan Earthquake and tsunami triggered the Fukushima disaster on March 11. Both had been taken offline for mandatory maintenance and inspection by September 2011.

During the review process, however, the utility decided to raise the estimate to 620 gals. It also raised estimates for the tsunami that could hit the plant to about 5 meters above sea level.

None of Japan’s 48 reactors will be put back online until they meet the new regulations, which for the first time oblige utilities to list specific countermeasures for severe accidents and tsunami.