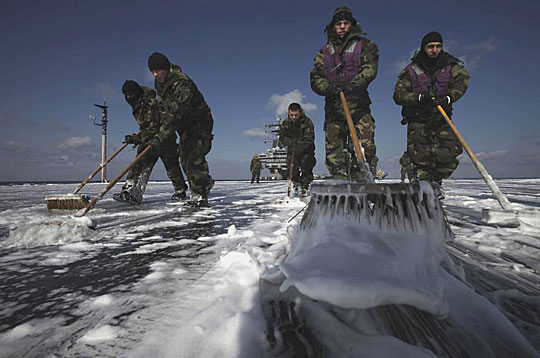 Today, the former U.S. Navy officer says one side of his body has withered. “My right arm is about an inch-and-a-half smaller than my left; my leg, too. Nobody can figure out what’s wrong.” After 17 years’ service on American military bases in Japan, he has been forced to retire — aged 37.

Sebourn fears his condition was triggered by his job during Operation Tomodachi, the huge relief mission mounted by the U.S. military during the March 2011 disaster. After the Fukushima No. 1 nuclear plant went into meltdown on March 11, he was dispatched to Misawa Air Base in far-northern Aomori Prefecture to check helicopters for radiation.

The work put him in close contact with contaminated aircraft for weeks. Radiation levels were high enough to require a mask and respirator, he says, but all he wore was gloves. “To be honest, I really hope what’s wrong with me is not radiation-related. But I know radiation works in slow decay. So I’m worried about what will happen 10 or 15 years down the road.”

Sebourn is one of about 80 U.S. Navy personnel — most in their 20s and 30s — named in a new $1 billion class-action lawsuit against Tokyo Electric Power Co. The suit claims Tepco was negligent about safety and lied to the sailors and the public about radiation levels at the No. 1 plant at the same time as Japan was asking for help for victims of the earthquake and tsunami.

Citing the 2012 Diet Commission report on the Fukushima disaster, lawyers Paul Garner and Charles Bonner say the utility knew the plaintiffs were going to be exposed to unsafe levels of radiation because it was aware that the plant had experienced a triple meltdown, but chose to keep it secret.
The plaintiffs are dealing with the consequences, say Garner and Bonner, “with illnesses such as leukemia, ulcers . . . brain cancer, brain tumors, testicular cancer, dysfunctional uterine bleeding . . . and a host of other complaints unusual in such young adults.” The plaintiffs include a baby born with “multiple birth defects” to a servicewoman seven months after the meltdown.

“The injured servicemen and women will require treatment for their deteriorating health, medical monitoring, payment of their medical bills, appropriate health monitoring for their children and monitoring for possible radiation-induced genetic mutations,” says the lawsuit, which was filed in San Diego on Feb. 6. “Some of the radiological particles inside of these service personnel have long half-lives, from six to 50 to 100 years.”

Tepco and the U.S. Navy insist the amount of radiation released after the crisis was insufficient to have caused the range of medical problems cited by the plaintiffs. Neither would comment for this article about the lawsuit.

The stakes are high. If successful, the case opens up the possibility of claims from not just American military personnel and their dependents but potentially thousands of Japanese who experienced the fallout. Bonner says it has been filed on behalf of 70,000 U.S. citizens who were in Japan during the crisis, including 5,500 sailors on board the USS Ronald Reagan aircraft carrier during Operation Tomodachi. “We expect more to join.”

Most of the plaintiffs were serving on the carrier, which arrived off the coast of Japan on a humanitarian mission on March 12. Garner says fuel melt in the No. 1 plant’s reactor 1 began five hours after the March 11 quake, “giving Tepco ample time to warn them off. “These first responders were entitled to know before sacrificing their health and lives.”

Lead plaintiff Lindsay Cooper spent much of her time on the flight deck of the Ronald Reagan during the crisis, about a mile offshore from the No. 1 plant. She recalls the constant taste of “aluminum foil” in the air during the days after March 11. “We just weren’t concerned about the radiation — our concern was getting food and humanitarian assistance to those that were in need on the coastline.”
Crew members aboard the carrier used contaminated desalinated water to shower and brush their teeth. Cooper says the captain subsequently announced that all drinking water had been contaminated. Later, when they tried to sail away from the radiation, the carrier was blocked from entering ports in Japan, South Korea and Guam.

“No ports would let us in,” she recalls.

Cooper says the radiation she ingested off Fukushima has knocked her thyroid “out of whack,” leaving her with fluctuating weight problems and disrupted menstrual cycles. Hoping for a second child, Cooper says she can no longer get pregnant. She too retired from the service for health reasons in 2011.
The lawsuit is likely to hinge on two key factors: how much radiation crew members were exposed to, and whether the bewilderingly wide range of symptoms — from inoperable brain cancer to chronic back pain — can be attributed to their exposure. Experts say demonstrating exposure is likely to be more straightforward than proving its impact.

“If the USS Reagan was offshore during March 11, 12 and 13, the sailors could have received whopping doses . . . as they clearly exhibit deterministic effects,” says Ian Fairlie, a respected independent consultant on radiation risks. He says the No. 1 disaster sent several big plumes out to sea on those dates. He calculates that most of the damage was done via inhalation and skin absorption, not water ingestion.

Even with such expert testimony, however, the plaintiffs face an uphill battle determining the exact extent of their exposure. Speaking on condition of anonymity, one U.S.-based environmental expert said establishing causation in cases of exposure to environmental contaminants — radiation or otherwise — is a major legal challenge.

“Of course we know that they were exposed to some (likely very high) levels of radiation, and that some or many of these illnesses may have been caused by that exposure, [but] it’s very difficult to prove it,” the expert wrote in an email. “And because it’s difficult to prove, it’s even harder to argue in a court of law.”

If the case goes to trial, scientists for Tepco and the navy are likely to argue that the symptoms do not match typical cases of radiation exposure, which normally trigger acute sickness in the immediate days and weeks after an accident. They will say that cancers would normally be expected to appear much later.

The first attempt to launch the suit was dismissed in December after a San Diego judge said she was unable to rule on a conspiracy charge against the Japanese government. Judge Janis L. Sammartino said she did not have jurisdictional authority to determine whether the government — together with
Tepco — had lied about the extent of the disaster to its U.S. counterpart.

Sammartino left the door open for a second attempt but signaled a potentially serious legal hurdle. She said the plaintiffs must show — at a minimum — that the navy would have behaved differently “but for Tepco’s allegedly wrongful conduct.” Courts are constrained, however, from probing the decision-making processes of the U.S. military.

Garner and Bonner say the revelation, from former Prime Minister Naoto Kan, that meltdown was underway before the Ronald Reagan sailed for the coast of Fukushima relieves judges of the need to second-guess what military commanders were doing.

“The soldiers didn’t know that meltdown had happened,” says Bonner. “They were helping tsunami victims, totally unaware that Tepco was dumping millions of tons of radioactive water into the Pacific.”
Many of the plaintiffs are reluctant to talk to the media. According to Stars and Stripes newspaper, some have been threatened and harassed and “accused of being fortune-seekers” by their peers. But Mike Sebourn denies money is the purpose of the suit.

“I don’t want to get rich — I couldn’t care less. I want some kind of medical fund that will take care of us down the road if we get really sick.” Without a court ruling, Sebourn says, “There is not a single bit of evidence anywhere at all that says we were exposed to radiation.”

Sebourn is also worried about his half-Japanese son, who remained at his home base, Naval Air Facility Atsugi, in Kanagawa Prefecture, while his father worked up north. Atsugi was a “dumping ground” for irradiated equipment, says Sebourn.

“My son missed a month of school because he would throw up uncontrollably for 50 times a day. If it’s not radiation, I don’t know what else it could be. I just want to know what happened to us.”