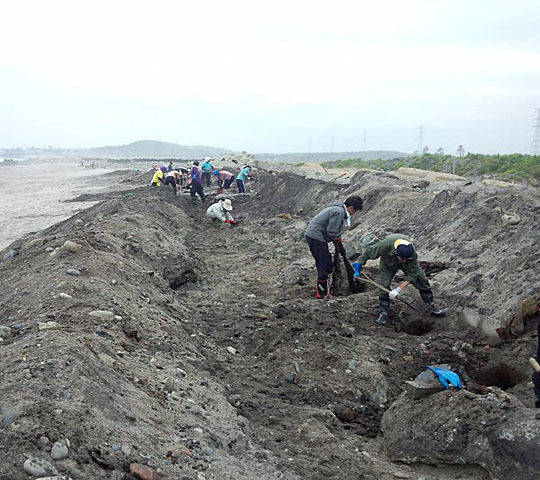 One of the great statistical mysteries that persist several years after a natural disaster is the figure that appears without fail each month in columns representing the number of people that are still missing.

Almost three years after the Great East Japan Earthquake and tsunami devastated coastal regions in Tohoku on March 11, 2011, a total of 2,636 people remain missing as of February, statistics released by the National Police Agency show. More than 15,800 were killed.

While most relatives of those still missing have probably given up hope by now, a few hardy volunteer groups continue in their search to return the deceased to their loved ones.

It’s a backbreaking and largely thankless task, says Masahiko Midorikawa, who has been organizing search parties for two years with the help of volunteers from his nonprofit organization called Nine.

Midorikawa likens the search to trying to find an object the size of an ant on a tennis court, as what volunteers are searching for is often buried under rubble or debris sediment. The Tohoku coastline is several hundred kilometers long, and there is no easy way to get the job done.

“The amount of land one can search in a day is extremely small,” Midorikawa says, adding that he would be happy just to “cover an area roughly the size of six tatami mats each day.”

A typical Saturday for Midorikawa and his group starts before midnight on Friday, driving their vehicles from Tokyo to Miyagi Prefecture and arriving at about 4 a.m. The volunteers take a short rest and wolf down some breakfast before making their way to a predesignated site to sift through debris and driftwood or dig up part of a beach.

The majority of those missing in Tohoku are likely to have been swept away by the tsunami and thus most searches are concentrated in locations along the coast and near rivers. Volunteers from Nine incessantly dig, sift and examine their findings piece by piece, then move on to another site and start the process again.

Beaches are filled with all kinds of items you are likely to find in a typical household, often found buried under the sand, Midorikawa says. Volunteers have uncovered photographs, kitchenware, plastic toys, vinyl bags, tires, tiles, children’s shirts with name tags still sewn in them and even the wooden frames of a house during their digs — in short, everything including the kitchen sink.

They have discovered that the ocean currents off Tohoku generally deposit debris that was swept out to sea by the tsunami a little south of its origin. Coastal areas near the city of Minamisoma in Fukushima, for example, often contain items that appear to have originated from Miyagi Prefecture in the north. Subsequent storms have also brought additional debris back to shore randomly, even in locations that had previously been searched extensively.

When Midorikawa first started to sift through tsunami debris in February 2012, he prayed that he wouldn’t find anything. He felt a little uneasy about coming across decomposed human remains on a beach, let alone a bone that belonged to someone he didn’t know.

Volunteers have certainly stumbled across many bones over the past two years but, even now, Midorikawa never knows whether the bones they uncover belong to an animal or a human being.

“We take whatever bone fragments we find to the local police,” Midorikawa says. “We don’t really know what happens after that. We aren’t ever told if they are human or not.”

Midorikawa was initially inspired to search for people missing from the tsunami after reading a Twitter message that had been posted by the parents of a missing child in Tohoku, who had asked police not to scale down search efforts in their town. Midorikawa couldn’t ignore the call.

But every time he uncovers tsunami debris that can be traced back to a surviving relative, he finds himself in an uncomfortable situation.

“At this point, I can’t say for sure whether it’s good to give someone final proof that their loved one has definitely gone,” he says.

Once he found a wristwatch that belonged to a housewife who was missing. Her husband didn’t appear particularly happy to receive the watch and Midorikawa came to understand he had, in effect, just presented the man with something akin to a death certificate.

Despite such difficulties, up to a few dozen Nine volunteers comb the beaches of Tohoku on a Saturday or Sunday on any given weekend, driving back home and returning to Tokyo around 10 p.m. Midorikawa has lived this life now for almost two years.

Midorikawa first volunteered to help clear a site in Miyagi Prefecture just two months after the tsunami swept away communities along the Tohoku coast in 2011. He joined cleanup efforts at a time when the number of volunteers in the region hit their peak. Statistics by Japan National Council of Social Welfare show that more than 102,000 volunteers signed up with the council’s branches to work in Miyagi that May alone, not to mention others who visited the area on their own.

Midorikawa’s family lineage can be traced back to the Tohoku region but no blood relatives have lived there for several generations. Nevertheless, the magnitude of the catastrophe prompted him to jump on a bus one morning and head north. The bus arrived at a site in Miyagi Prefecture around noon, at which point the volunteers were told to stop for lunch. They began clearing debris after finishing their packed bentos but were only able to complete three or four hours of haphazard work before piling back onto the bus for its return journey to Tokyo.

Frustrated with the overall effort, Midorikawa decided then and there to launch a volunteer organization that would be more effective in terms of aid. Nine was therefore established in a bid to provide assistance when and where it was needed most.

Initially, volunteers were required to make countless roundtrips to Tohoku in order to supply isolated households with daily necessities that weren’t available in local stores. After three months, the group’s focus shifted from delivering supplies to the removal of tsunami debris from the streets.

Then in February 2012, volunteers from Nine started to concentrate on recovering personal items from victims of the tsunami. They also started actively searching for human remains.

“So far, I think we’ve recovered about 2,000 bone fragments” during searches of the Tohoku coastline, Midorikawa says. Of those, however, only two or three bones clearly belonged to a human being.

“When we first started finding bone fragments, we used to hold them and say, ‘Okaerinasai‘ (welcome back), because it truly felt like we were bringing people who had been lost (in the tsunami) home,” Midorikawa says.

“These days, whenever I find a bone I simply pick it up, maybe even smell it,” he says. “I’ve repeated the process so many times now that I’ve become desensitized about our ongoing efforts.”

On the day of the Great East Japan Earthquake, Okuma in Fukushima Prefecture experienced a temblor registering upper 6 level on the Japanese intensity scale. The massive quake triggered a tsunami as high as 12 to 15 meters, which flooded the Fukushima No. 1 nuclear power plant located in the northeastern part of the town and set off a nuclear catastrophe.

Yuna Kimura, who was 7 at the time of the quake, is the only person in Okuma still unaccounted for as of today. Her father launched a frantic search for his daughter as soon as he realized she was missing, but was ordered to evacuate the town the following day due to the nuclear crisis.

Almost three years later, approximately 96 percent of homes in Okuma remain within the no-go zone, and residents are only occasionally allowed to visit their homes for a few hours at a time. Coordinating a triangulated search for missing people in areas such as Okuma is virtually impossible, and yet Yuna’s father refuses to give up. Midorikawa and other Nine volunteers often accompany him on each trip.

“Okuma is filled with emptiness,” Midorikawa says. “There is literally nothing there any more. It has been completely abandoned.”

Volunteers have been able to locate a few of Yuna’s personal effects, including a gym shirt, but they’ve failed to find anything substantial. In fact, they’re not exactly sure where they should be looking anymore.

Yuna’s house is located approximately 3 km from the crippled nuclear power plant. Her father recently erected a small stone Buddhist statue near the family home so that her spirit wouldn’t feel lonely when returning to the deserted town.

Time is also of the essence. Tokyo is currently in negotiations with the local government to build a storage facility in Okuma to keep contaminated radioactive waste in the town for an extended period of time. “Once that facility is built, it will be the end of operations,” Midorikawa says. “There won’t be any further opportunities to search for the remains of the girl.”

He has called on the police to conduct a full-scale search of the area before any firm decisions are made on the storage facility for contaminated waste.

Yuna’s father, though, is not the only parent in Tohoku looking for a missing child. Midorikawa says that another father in the city of Minamisoma is spending countless hours searching for his 3-year-old son. The man is so absorbed in his search that he constantly forgets to wear protective gear while turning over potentially toxic soil.

Midorikawa believes that many Tohoku residents are currently in worse shape than they were in 2011. The number of volunteers has shrunk to a fraction of the number that used to travel to the region to help cleanup operations.

In 2011, residents were genuinely hopeful of a brighter future. The reality now, however, couldn’t be starker. Over the past three years, more people in Fukushima Prefecture have died as a result of stress-related illnesses as a consequence of the quake and tsunami than the number of people killed on March 11, 2011, a joint report released last month by the prefectural government and the local police showed.

Nine is scheduled to review other projects in Tohoku shortly, but Midorikawa says his nonprofit organization will continue its search in Okuma for the time being.

Thousands of people are still missing from the Great East Japan Earthquake and tsunami, and thousands more are not even able to mourn their loss.

“It’s naive to believe that three years is enough time for people to get back on their feet,” Midorikawa says. “That couldn’t be further from the truth.”