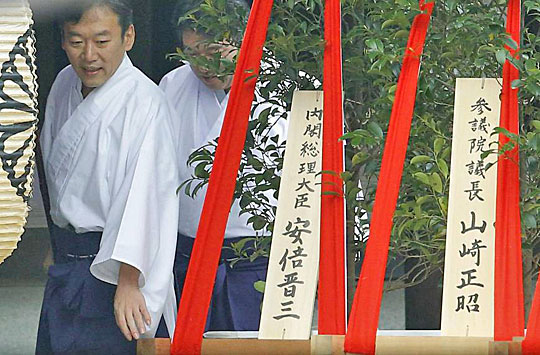 The offering of the “ma-sakaki,” a decorative tree used in Shinto rituals at the war-linked shrine, came just days before U.S. President Barack Obama’s visit here.

Chief Cabinet Secretary Yoshihide Suga played down the chances of the gesture marring the bilateral summit between Abe and Obama on Thursday.

“(Abe’s offering) would not affect the summit talk. . . . Abe sent it in his private capacity,” Suga said — although the offering was sent under the name “Prime Minister Shinzo Abe.”
Yasukuni, which honors the nation’s war dead, including Class-A war criminals, is viewed by Japan’s neighbors as a symbol of its wartime aggression.

Though Abe did not make a personal visit for the festival, Seoul was quick to react, labeling the offering “deplorable.”

In a statement, the South Korean Foreign Ministry slammed Abe’s move as an “anachronistic act of hampering friendly ties among neighboring countries and stability in the region.”

It also criticized the recent visits of two Cabinet members to the shrine, saying Abe and his ministers “ignored concerns by neighboring countries and the international community and visited the shrine, which glorifies Japan’s war of aggression and colonial rule and enshrines war criminals.”

The conservative leader has already said he has no intention of visiting the shrine during the spring festival.

His visit to Yasukuni last December also drew unusual criticism from the U.S., which expressed “disappointment” with the move.

Last October, in an apparent effort to discourage Abe from visiting Yasukuni, U.S. Secretary of State John Kerry and Defense Secretary Chuck Hagel went to Chidorigafuchi National Cemetery in Tokyo and prayed for the remains of unidentified Japanese who died overseas during World War II.

On Thursday, Obama is scheduled to pay a visit to Meiji Shrine in central Tokyo, which is dedicated to the late Emperor Meiji and his wife, Empress Shoken. The expected move is thought to be another attempt to nudge the nation away from lionizing Yasukuni.

Emperor Meiji founded Tokyo Shokonsha, which is what Yasukuni was originally named, in 1869 to enshrine soldiers who fought for Imperial forces during the Boshin War, a civil war between the Tokugawa shogunate and the Satsuma-Choshu alliance, which wanted to restore Imperial rule.

De-escalating regional tensions is especially critical for Obama, whose Asian tour will also take him to South Korea, Malaysia and the Philippines. The tour is partly intended to bolster the Japan-U.S. alliance and boost trilateral cooperation with Tokyo and Seoul to counter the potential nuclear threat from North Korea and China’s growing military assertiveness.

Obama brokered trilateral talks last month on the sidelines of the Nuclear Security Summit at The Hague in an effort to help rebuild ties between Japan and South Korea.