1.   A lot of arresting happening within a short time:
On Sep. 12th, Gangjeong villagers and the Peace Activists who couldn’t go back home had a celebration for Korean Thanks-giving Day together. Some villagers were absent because of the unfair imprisonment.
Since the struggling has been started, the arresting from the national power never stopped. So far, many peace activists or villagers have ever been arrested and putted in jail. Now there are still 7 protesters in Jeju regional jail. They were respectively arrested on August 24th,September 1, and September 2nd.

On August 24th,the navy and the construction workers come to the naval base construction sites to assemble the crane. The mayor of Gangjeong went to the sites to observe the situation and contacted with the Seogwipo city hall for the further information of this action. Thus, everybody is waiting for the results, and while waiting the results, the police suddenly tried to arrest mayor.

People were very angry and rejected to let the police bring the mayor out. Following the blocking, more people got arrested and finally the police promised the people that they will release the arrested after finishing the investigation in the police station but police broke out the promise so the villagers had a huge demonstration overnight in front of the police station on 25th.

The incident of August 24th washighly possibly designed by Ministry of Defense in Koreafor making a reason to arrest a lot of key people in this struggling.

On September 2nd,around 1500 police men from both Jeju island and mainland Korea suddenly attacked Gangjeong village at around 4:00 am. Police men blocked the Olley7 course to isolate the keepers of the way to Gureombi, but people tried to enter through the jungle. The navy and construction workers were building up the fences and whoever tried to block got arrested directly by police. In a few hours, the police arrested 38 people, and finally the fences had been totally build up. The other terrified arrestments of 6 innocent people were happened outside of the front line too on both Sep 1st  and2nd.

You can write a letter to each of them. Send to the following address with their prison Number:
161 Jeju prison Ora-2 dong,   Jeju city,   Jeju Special Self-Governing Island,    South Korea.

<Support those in prison from Jeju protests facebook group >

2.   The discovery of historical heritage in the naval base construction site:
Accordingto Hwang, PyungWoo, the director of the Korean Cultural Heritage Policy Research Institute, there are archaeological finds from the Bronze Age up to the late Josen era inside the naval base construction site at Gangjeong village. He believed thisfinds will eventually be declared as national cultural assets.

Afterconsulting lawyers regarding cultural properties protection law, construction at the site is illegal before a complete investigation into the presence of cultural assets had been conducted.

However,the navy shows no concerns about this but only shows higher eagerness to accelerate the naval base construction. It seems that the Korean law is powerless to prevent this cultural destructive action. 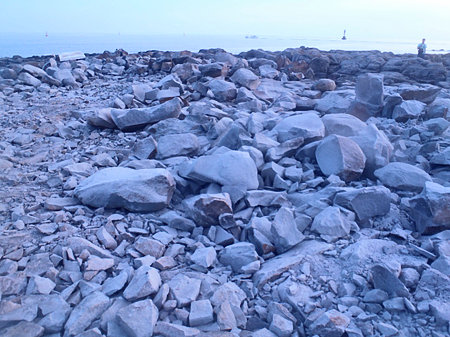 You can see the beautiful Gureombi rock was seriously broken because of the resuming of the illegal construction after Sep. 2nd.

Infact, none of the villagers and activists is allowed to enter Gureombi because ofthe injunction and fence. For one time access to the construction site, they will get 2 million fines each time. Under the pressure of being fined, Brother Song, Kang-Ho still continue to go to Gureombi by swimming as all the road had been blocked and occupied by the navy and police. He has been praying in Gureombi every morning and he witnesses the terrible destroyed Gureombi rock. Now theprosecutor has applied the cancelation of releasing on bail of Brother Song, Kang Hoand Go, Kwon-Il, leader of committee against naval base in Gangjeong. It means both of them may be forcibly arrested again soon.