Is the Jeju Island on the way of high-tech space center?


Is the Jeju Island on the way of high-tech space center? 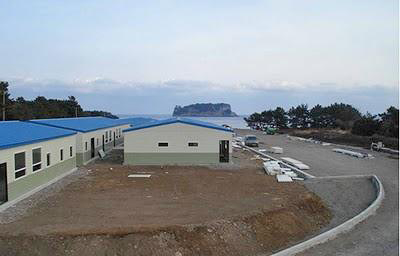 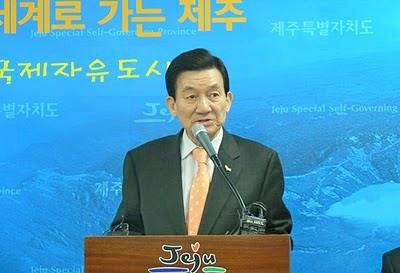 
According to the Sisa Jeju article on Jan. 19, 2011, the Jeju naval base business committee has said on Jan. 19 that construction on the field offices, which started with turmoil in which 34 people were arrested in their peaceful press interview against naval base construction on last Dec. 27, was finished.

The below is the translation of the article in part:

It was known that the naval base business committee has been considering the âsimpleâ opening ceremony on the âfield officesâ, in which the navy and personnel related to building companies join.

It was known that the committee has decided its inner policy to complete all the constructions on the Jeju naval base by the end of 2014.

Even though the Gangjeong Village Peopleâs Council have requested the navy and government to stop construction during the period of appeal [against the Jeju local court decision on Dec. 15, 2010 when the lawsuit on the cancellation on the annulment of absolute preservation areas was dismissed by that court that made reason of improper qualifications of the plaintiffs (the Gangjeong villagers)] on Jan. 7, the navy has delivered the village its official letter in which it rejected the villagersâ demand, for the reason of construction delay and cost following it on Jan. 17.

The civic organizations against naval base are also planning more vital activities.

It was also known that it was planning pan-Korean appeal movement to denounce the [Dec. 15] court decision of dismissal of the plaintiffs (the villagers) on the lawsuit on the absolute preservation areas, which had been filed by the villagers, by connecting with social organizations in the other areas.

Even though the controversy on the naval base is currently being processed, it is pointed out that the Jeju Island government and Island Council who should mediate are only waiting and seeing

Otherwise, according to the

Jeju Hwankyung (meaning Environment) Ilbo, Byon Jeong-Il, the President of the Jeju Free International Development City Development Center (JDC, afterward) has announced on Jan. 18 that the center would make the Jeju Aero Space Museum [that would be completed in 2013, according to plan] as one of the famous tourism sites while he announced the centerâs initiative for 2011.

The Seogwipo Daily Newspaper has reported on March 23, 2010 that the Daerim inc. consortium was selected as the company to build the âAerospace museumâ in Seokwang-ri, Anduk-myeon [1gich is 40 minutes car distance from the Gangjeong village], City of Seogwipo, Jeju Island. The Daerim inc. consortium is composed of Daerim Industry (42%), Hanwha Construction (20%), Hwasung Industry (18%) and other two companies(each 10%)

Daerim Inc. is one of the companies, with Samsung, who have involved in the Yongsan tragedy, and is to take charge of the 1st construction part of bay & harbor for the planned Jeju naval base. Hanhwa is infamous for the production & export of the cluster bombs.

Tourist haven Jeju Island, famous for flowers, rocks and wind, could become a technology hub when an aerospace museum is completed by 2013.

The Ministry of Land, Transport and Maritime Affairs started construction at Shinhwa Park, Seogwipo, and Tuesday with a planned investment of some 130 billion won ($100 million) in the project.

The ministry, the Air Force and the Jeju Special Self-Governing Province have teamed up to bring the museum to fruition.

The 330,000-square-meter complex is to be composed of an ``experience center'' where people can try programs related to the space industry and view ``exhibitions'' showing basic information about air and space, which are still considered largely irrelevant to many people here.

Pilot training, simulators, entertainment facilities, training centers and a three-dimensional cinema and planetarium are to be built to attract the younger generation. A history museum focusing on Korean space studies and the Air Force will appeal to other age groups, the ministry said.

The museum surroundings will feature five theme parks where people can sit in aircraft exhibits.

Simulated Air Force combat, operational training and a military transport for soldiers are also to be exhibited.â

The remarkable thing in the current flow of the Jeju media is that there are little mentions on the military relationship to the current development projects by the JDC.

The government and navy seem to have been very cautious not to leak the contents related to the military in the 'eco-friendly' high-tech development of the Jeju Island. But the recent flow shows that they are also working on the expansion and development of some harbors that could be strategic key points-such as Hawsoon, Moseulpo-under the name of civilian usage, which could be converted into military usage any time.

The sea lanes between Pyeongtaek-Jeju and Kunsan-Jeju are also being developed. The Pyeongtaek and Kunsan are those key locations where the U.S. bases are located and being developed as the parts of the Missile Defense Belt in the West Sea (Yellow Sea).

The Jeju Island, not to mention of naval base currently in controversy seems to be secretly being driven for another center for the space facilities that can be surely imagined of military use.

Still, being ambitious with the prospect to be chosen as one of the seven wonders of nature in the world, the central government, Island government and Island Council seem to be intentionally silent on those important things through media control.

Towards sky and space, Jeju Aerospace Museum to be established 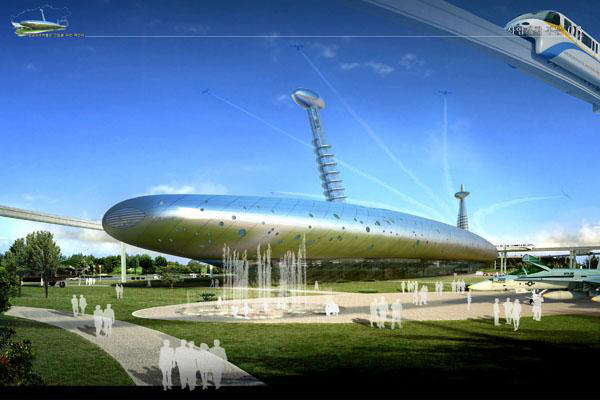 The ground breaking ceremony for the Jeju Aerospace Museum was held May 5 at the site near Seogwipo.

There was an air show over the future site of the Myth and History Theme Park, at Anduk-myun, Seogwipo, against the backdrop of gorgeous green tea fields. Approximately 3,000 guests, including Lee Kye-hoon, the Korean Air Force Chief of the General Staff attended the ceremony.

Last July the Air Force invited applications for the location of the museum from local governments and Jeju was selected as the preferred candidate. The Jeju Development Center, along with the Jeju Special Self-Governing Province, was the chief negotiator to spearhead the project. On Feb. 11, the JDC finalized the contract to establish and operate Jeju Aerospace Museum which is set to open in 2013 as part of the new Myth and History Theme Park.

Jeju myth contributes to site selection
Some opponents felt Jeju may not be an ideal choice for an aerospace museum due to lack of infrastructure in the surrounding area, which is largely farmland. However, an Air Force official urged them to reconsider and noted that in 2013 when the museum opens, the number of potential visitors to Jeju would be more than 7 million.

A JDC official also said that âGiven the fact that an Air Force Academy was relocated to Daejeong, Jeju during the Korean War and there is a myth that a general with wings would be born in Jeju, Jeju could turn into a prime site for an aerospace museum. An aerospace museum in the Myths and History Theme Park will be another tourist attraction on Jeju.â 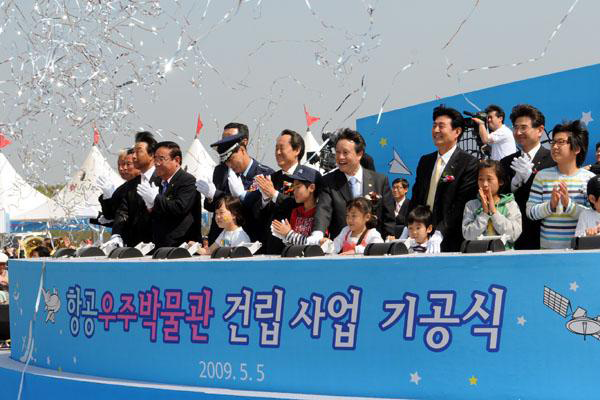 The Jeju Aerospace Museum will be designed in the shape of an aircraft. The two-story building will feature a Korean Air Force History Exhibition Hall, Space Hall, 4D Theater, 4D Planetarium, and Training Center. The JDC is considering a museum which will provide a hands-on, educational and entertaining experience, rather than a simple observation museum.

Outside the museum, there would be five theme zones featuring aircraft and an Air Force exhibition. This area could include a monorail, eco-path, military airbus, spaceship model and a driving path.
An aircraft-themed hotel is also slated for the sight.

Three government bodies will share museum duties
The JDC, the Jeju Special Self-Governing Province, and the Korean Air Force will share responsibilities for the museum. JDC will plan the project, construct the museum, and establish and maintain displays such as planes and equipment. The Air Force will support the construction and operation of the museum.

The Jeju Special Self-Governing Province will support administrative procedures, permission, and smooth implementation of the project. According to the JDC, the Jeju Aerospace Museum is expected to boost Jeju tourism, promote the Air Force, and inspire the spirit of inquiry of young people.