Jeju Aerospace Museum in the Seogwipo City, by 2013? 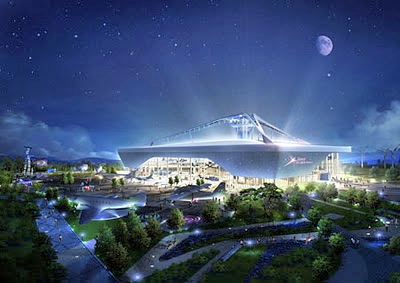 Image source: same as the below link
Design of the Jeju Aerospace museum by Daerim Inc. Consortium

reported on March 23 that the Daerim inc. consortium was selected as the company to build the "Aerospace museum" in Seokwang-ri, Anduk-myeon. City of Seogwipo, Jeju Island.

*The Jeju Free International City Development Center announced on March 22, that the Daerim Inc. Consortium was finally selected before the Samsung C & T inc. consortium, as a result of the bid for the laying out & carrying out the construction of the aerospace museum.

* Wait. Daerim Inc. is one of the companies, with Samsung, who have involved in the Yongsan tragedy, and is to take charge of the 1st construction part of bay & harbor for the planned Jeju naval base.

Hanwha is infamous for the production & export of the cluster bombs. (For more. click HERE)

"Tourist haven Jeju Island, famous for flowers, rocks and wind, could become a technology hub when an aerospace museum is completed by 2013.

The Ministry of Land, Transport and Maritime Affairs started construction at Shinhwa Park, Seogwipo, Tuesday with a planned investment of some 130 billion won ($100 million) in the project.

The ministry, the Air Force and the Jeju Special Self-Governing Province have teamed up to bring the museum to fruition.

The 330,000-square-meter complex is to be composed of an ``experience center'' where people can try programs related to the space industry and view ``exhibitions'' showing basic information about air and space, which are still considered largely irrelevant to many people here.

Pilot training, simulators, entertainment facilities, training centers and a three-dimensional cinema and planetarium are to be built to attract the younger generation. A history museum focusing on Korean space studies and the Air Force will appeal to other age groups, the ministry said.

The museum surroundings will feature five theme parks where people can sit in aircraft exhibits.

Simulated Air Force combat, operational training and a military transport for soldiers are also to be exhibited."


How the story is relevant to the Jeju naval base plan that the ROK government has bluffed out to finish by 2014(?). It is surely one of the attention points.

Posted by NO Base Stories of Korea