National Council of Churches in Korea: Statement on the planned live-fire drill of the South Korean government

Violence begets violence; let us seek for the way of peace together!

When He approached Jerusalem, He saw the city and wept over it, saying, "If you had known in this day, even you, the things which make for peace! But now they have been hidden from your eyes. (Luke 19:41-42)

We are desperately praying for the peace of the Korean peninsula as we are waiting for Jesus Christ, the prince of peace in this season of Advent. Just a month ago, artillery fire at Yeonpyeong Island killed several soldiers and civilians and devastated the homes and livelihood sources of the community. Grieving the loss of the people and community, NCCK expressed deep concerns over the critical situation of the escalating military tension in the Korean peninsula. We also reiterate that we are against any military clashes and warfare in the Korean peninsula, for any reason.

Again all Korean people, even before the wound of the Yeonpyeong Island incident is healed, are going through a painful period of anxiety and fear as the South Korean government announced it will hold a live-fire drill on the west coast on Dec. 20-22 and North Korea, in turn, has vowed to retaliate. Whether the drill is justified or not, it is a provocative action which can lead to war.  It is obvious that the military provocations between two Koreas threaten the peace of the Korean peninsula, create anxiety among people and severely hit the economy, bringing unrecoverable disaster to the Korean peninsula. Therefore, we reiterate that the rigid position of the South Korean government in going ahead with the drill is not a responsible attitude as their duty is to secure the safety of the people and the peace of the nation.

Now is the time that both South and North Korea must refrain from any provocative actions which will destroy the two Koreas altogether.  Now is the time that both governments must begin a sincere dialogue for the future of the nation and for the peace and security of the people.  We also urge the states surrounding the Korean peninsula to consolidate all their efforts to transform the current situation of crisis into co-prosperity of the region through dialogue and cooperation. Peace of the Korean peninsula is directly connected with peace of Asia as well as of the whole world. Therefore, we humbly request that the surrounding states sincerely work for peace of the Korean peninsula without reflecting, if any, their political, military and economic interests.

Seoul to go ahead with live-fire exercise

The South Korean military will conduct a live-fire exercise on Yeonpyeong Island as planned Monday or Tuesday, officials here said Sunday, despite opposition from China and Russia, and North Korean threats of further provocations.

Diplomatic factors and North Korean threats will not be taken into account in staging the exercise on the island near the tense western sea border, they said. The North bombarded the island on Nov. 23, killing four South Koreans including two civilians. 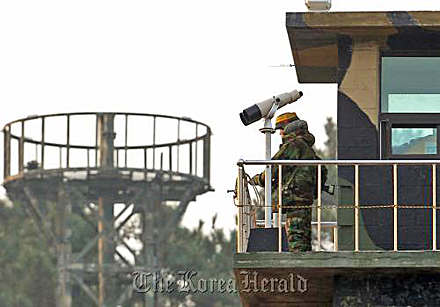 "We have prepared for the exercise with this basic stance that we will definitely stage the exercise, which is our military's legitimate one. Some say it could be put on hold or called off due to outside influence, but that is not true," a senior government official said on condition of anonymity.

"Considering the weather, we are reviewing when the conditions for the exercise will be better. North Korean threats or diplomatic variables are not under consideration."

Another government official underscored that there was nothing for the North to take issue with regarding the planned exercise as it is purely defensive in nature and a routine exercise that the military has conducted for decades.

The military announced Thursday last week that the one-day exercise would occur between Dec. 18 and 21. It has not yet been held due to inclement weather, which would make it difficult for the South to monitor movements of the North Korean military.

South Korea is poised to use the right of self-defense to take a strong counterstrike, including air strike, rather than being bound to the rules of engagement should the North launch another provocation.

The North on Nov. 23 fired a barrage of artillery at Yeonpyeong after denouncing the live-fire drills on the island earlier in the day in a move that experts here said is aimed at neutralizing the Northern Limit Line, the inter-Korean sea border.

The North contended that the drills were conducted in its territorial waters as it does not recognize the NLL, which was drawn at the end of the 1950-53 Korean War by the U.S.-led U.N. Command. Pyongyang claims the border should be redrawn further south.

Some 20 U.S. troops have already been deployed on Yeonpyeong Island to carry out medical, communications and intelligence missions during the exercise. Nine representatives from the U.N. Command Military Armistice Commission and UNC member states are also set to observe the exercise.

On Friday, the North's military warned of military retaliation should the South go ahead with its planned drills. "Second and third self-defensive blows that cannot be predicted will be dealt," it said in a statement carried by the official Korean Central News Agency.

On Saturday, North Korea's Committee for the Peaceful Reunification of the Fatherland said in a statement, "There is no guarantee that the reckless warfare exercise will not lead to an actual war."

The Seoul government has notified China, Japan, the U.S. and Russia of the exercise plan.

The planned drill appears to have sparked a diplomatic battle among regional powers. While the U.S. and Japan extended support for the exercise, China and Russia called in South Korean envoys stationed in their countries to express their concern over it.

In a statement online Saturday, the Russian foreign ministry expressed "extreme concern" and urged all countries involved to exercise "maximum restraint and moderation."

At the request of Russia, the U.N. Security Council was set to convene an emergency session Monday, Korean time, to discuss the security situation on the Korean Peninsula.

Russia initially wanted the session to be held Saturday. But the session was delayed as representatives from other U.N. Security Council members said they needed time to consult with their home countries.

Ahead of the exercise, the Unification Ministry has checked security measures for South Koreans remaining in the Geumgang mountain resort and the Gaeseong Industrial Park in North Korea. Some 310 South Koreans are currently in the two locations. 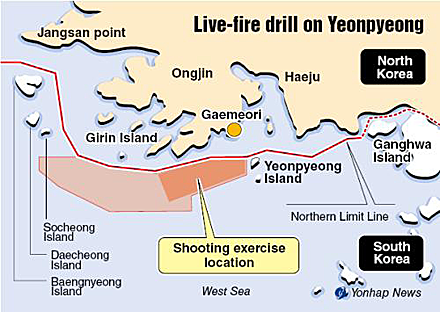 The ministry has instructed government officials in charge of the two areas in the North to strengthen measures to secure the safety of South Koreans there.

Rival political parties were sharply split over the planned drills.

The ruling Grand National Party called for âstrict and strongâ retaliation while the main opposition Democratic Party called for a delay in the exercise, saying that it was time for all to work toward peace rather than further ratcheting up tensions on the peninsula.