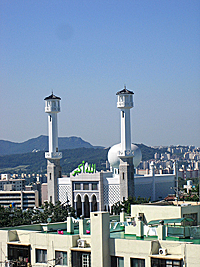 Islam and the wheeled cross of South Korea  (Hankyoreh)

Islam and the wheeled cross of S.Korea

It happened during the Roh Moo-hyun administration, when conservatives demonstrated against amendment of the Private School Act. Some conservative Protestant ministers protested with a reenactment of the suffering of Jesus Christ as he carried the cross, but the crosses they were carrying had wheels on them. Where the crosses pressed against their shoulders, they were wrapped in padding. They calmly carried their crosses along like empty carts.

Crosses with wheels on them - it turns out that this is a longstanding tradition in South Korea's conservative Protestantism. At a "Citizens' Harmony Prayer Meeting" held in Seoul's Daehangno neighborhood on April 3, 2004, just before Easter, senior pastors including Gil Ja-yeon of Wangsung Church, Eom Shin-hyeong of Jungheung Presbyterian Church, and David Yonggi Cho of Yoido Full Gospel Church attached wheels to their crosses to mimic the suffering of Christ. The Protestant online newspaper News and Joy reported that the pastors calmly carried along their wheeled crosses before disappearing quietly in their luxury cars.

I am something of a "nylon Christian" who does not even go to church once a month because of work, but I do at least know the significance of the cross in Christianity. Jesus carried it up to Golgotha, the site of his execution, and was nailed to it, hanging there until he died. This is the beginning and end of Christian doctrine, which tells us that Jesus died on the cross for the sins of humankind. The cross is a symbol of redemption, where Jesus washed away our sins with the blood he shed as he died. Protestantism thus aims to carry the cross and move closer to the suffering of Christ.

The conservative Protestants of South Korea seems unwilling to face even a moment's trivial physical pain, let alone the ordeal of Jesus as he awaited his imminent death. The crosses hanging in their churches certainly are fitted with wheels and padding.

"Death waited at the end of Jesus's march with the cross," News and Joy lamented, "whereas beautiful luxury cars were waiting after these men's performance."

The ministers with the wheeled crosses have been speaking out lately. Rev. Cho effectively blocked government legislation to apply tax benefits for sukuk, or Islamic bonds, by threatening a campaign for President Lee Myung-bak's resignation unless it was withdrawn. Some critics are charging that this was a violation of the separation of church and state.

I believe that religion can and should express political views. The question of whether Rev. Cho violated the principle of separation of church and state is not all that simple. He certainly could express his opposition if the bill discriminates against another religion and infringes upon its interests.

The problem lies with the hatred conservative Protestant ministers are showing toward Islam, and their outlandish logic. Rev. Cho explained his actions by saying, "Ultimately, all I did was stress that the inflow of Islamic capital would generate a large risk for the state and society." This is a logic that equates Islam with evil. This becomes more evident when one views a statement by Pray for President! (PUP), a group consisting of some 3,000 ministers and Protestant leaders:

"The sukuk law, which will have the result of aiding Islamic in making inroads domestically, is tantamount to giving money to terrorist groups... The Islamic world is formulating a strategy of disrupting the missionary activities of the world's Christians through the Islamification of South Korea, the world's second-ranking missionary country. The expansion of Islamic forces domestically will bring about the result of saddling South Korea with the danger of terrorism and the same disease suffered by European countries."

If this is the case, then trading with Islamic countries could well be tantamount to funding terrorist groups. Some have said that one reason the government is so fixated on the sukuk bill has to do with the exportation of nuclear power plants to the United Arab Emirates. The reason, they say, is that it needs to arrange the funding for preferential financing for the export by way of the sukuk law. If this is true, then conservative Protestants should first be expressing their opposition to the exportation of the nuclear power plants. After all, couldn't money go to terrorist groups through the preferential financing?

Rev. In Myung-jin has said, "The reason there has fortunately been no serious eruption of religious conflict so far despite fundamentalist Protestants behaving this way is due in large part to the tolerance of their neighbor religions."

South Korea is the model of a religious pluralist state, but one gets the sense that the foundation for this is beginning to crumble. It is the conservative Protestant ministers themselves that are bringing on the very terrorism threat and European disease that they are so afraid of.

The views presented in this column are the writerâs own, and do not necessarily reflect those of The Hankyoreh.

It was bewildering and upsetting to see a photograph taken at a National Prayer Breakfast a few days ago showing President Lee Myung-bak and his wife Kim Yoon-ok on their knees praying. President Lee is well known to be an elder at Somang Presbyterian Church and a devout Christian, but this scene was enough to alienate a large number of South Koreans. More than anything, one finds it unfortunate that he felt compelled to deliver a prayer in such a way, since he has already been accused of introducing a Christian bias in his appointments and administration. 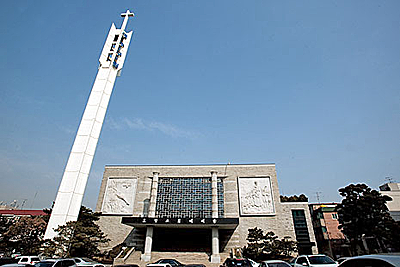 A president's religious freedom should certainly be respected. But in a religious pluralist country like South Korea, the religious actions of the countryâs chief leader should be a bit more circumspect and thoughtful. Unfortunately, the presidentâs prayer for unity that day, far from uniting South Koreans, instead served to exacerbate existing divisions and friction. The livid and concerted response from the Buddhist community is evidence of this. It is truly sad to see a prayer meeting held to pray for the nationâs development instead becoming the seed of discord.

The insensibility and arrogance of the Protestants who organized the event is truly astonishing. There was no sign whatsoever of any discretion in consideration of the presidentâs public position, nor was there any consideration for how the prayer scene would be taken by other religions. Recently, the Protestant church has been generating controversy over what is perceived to be excessive interference in politics through their opposition to legislation offering tax benefits for Islamic bonds. In such a situation, it should have presented a more restrained and humble image. Instead, it staged a scene of placing the president down on his knees in front of the Christian community..

One can understand the position of the president, who had no choice but to kneel according to the ministerâs instruction. But the ultimate responsibility for this episode lies with him. The fact that religious antagonism and conflict have reached dangerous levels under his administration is attributable in large part to religiously biased statements by important figures and associates connected with Somang Presbyterian Church.

Far from offering any policies for religious harmony, however, President Lee has continued to watch for cues from the Protestant church that represents his political support base. This latest episode was the product of a long string of such pro-Protestant actions from the president.

At the sight of the president's prayer, a question naturally came to mind: âArenât the people of South Korea the ones he should really be kneeling and praying before?â This is the reason why, as memories of how the president has persisted with the approach of someone reigning over the population came to mind, the image of him on his knees praying somehow seemed merely hollow.