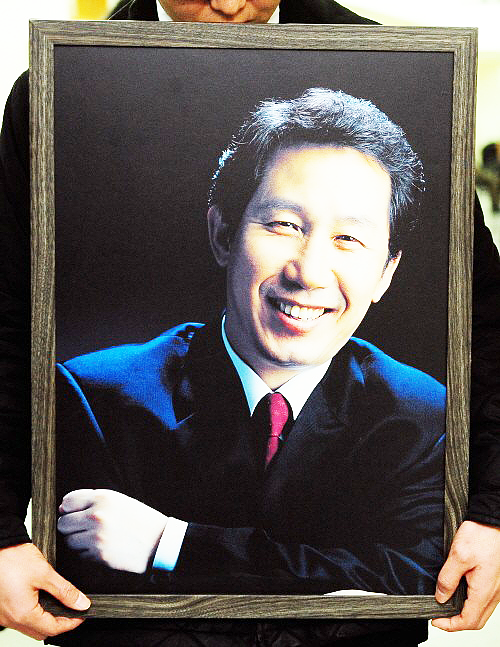 Under the dictatorships of the 1970s and 1980s, Kim was repeatedly jailed and tortured for his opposition against the regimes in support of democracy and labor rights. While in prison, Kim received the Robert F. Kennedy Human Rights Award and was designated a prisoner of conscience by the Amnesty International. After being released in 1988, Kim, one of the nation's best-known political prisoners, was elected to the National Assembly in 1996 and twice won reelection.

Kim served as health minister in 2004 under the left-leaning government of late President Roh Moo-hyun and later served as head of the then ruling party.

Once considered a potential candidate to succeed Roh as president, Kim retreated from public view after he decided not to run in the 2007 race.

He had since served as a standing advisor for the main opposition Democratic Unity Party (DUP), mediating opposition camp's efforts to put a united liberal front ahead of next year's parliamentary elections. 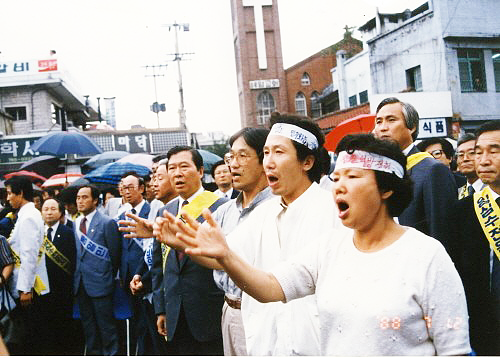 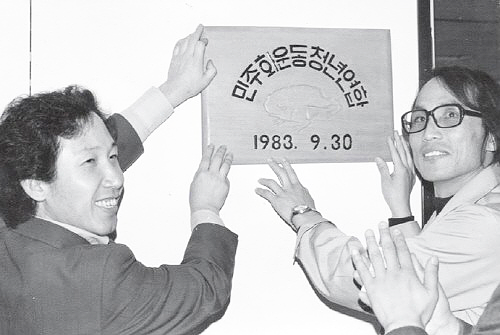 Kim had battled Parkinson's disease for the past five years, apparently attributable to torture of the past. A month ago, he was diagnosed with symptoms of cerebral vein thrombosis and died of complications from pneumonia and kidney disease in a Seoul hospital.

"Kim was the living witness to democratization of South Korea. Kim himself was the history of democracy," the DUP spokesman Oh Jong-sik said in a statement of condolence.

Kim is survived by his wife, a son and a daughter. 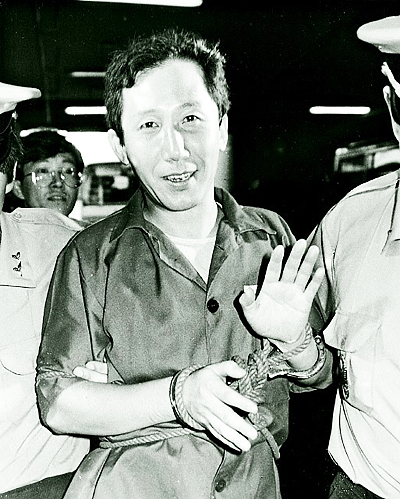 By Seong Han-yong, Political Correspondent
A black bouquet of flowers went up yesterday on the blog of Unified Democratic Party standing adviser Kim Geun-tae. Kim may have passed away, but his message carries on.
His final blog entry was titled "Occupy 2012." It was written on October 18, just before his health began to deteriorate. In it, he locates the case of the Arab Spring, the Greek financial crisis, and the Occupy Wall Street movement in the US in the social inequality and injustice and the US brand of neo-liberalism, while offering his own solution.
Its final words state, "In South Korea, where finance has less power than politics compared to the US, there isn't any need to occupy East Yeouido where all the exchange firms are. It is enough for us to occupy West Yeouido where the National Assembly is, and Jongno where the Cheong Wa Dae is. Fortunately, we have two chances to do so next year in 2012. Let's give our all to participating. Only engaged people create power, and the power thus created will set the course for the world."
Kim Geun-tae was not a man of extremes. In his battles with the Park Chung-hee administration in the 1970s and the Chun Doo-hwan administration in the 1980s, he was ever concerned about presenting a "realistic alternative." At the crucial moment, he opted for reform over revolution, participation over struggling. This was also the reason for his 1995 leap into politics. While serving as a ruling party lawmaker under the Kim Dae-jung and Roh Moo-hyun administrations, he worked to devise workable policy approaches such as a "democratic market economy" and "additional economic growth for increased welfare services."
Two years ago, Kim set up a small study group. Its members read up on a wide range of areas, including the economy, finance, foreign relations, national security, education, and labor. The reasons for all this studying were twofold. First, he felt that the reason democracy advocates and progressives had lost power was because they had failed to demonstrate the ability to address the suffering of South Koreans. Second, he determined that the results could be disastrous if those same forces came back into power in their incompetent condition through a rebound effect from the poor performance of the Lee Myung-bak administration. It was a very Kim Geun-tae concern.
The last passage in a blog entry from September 19 can also be considered along these lines. In it, Kim wrote, "The problem is the Democratic Party. To put it bluntly, the Lee Myung-bak administration was born out of frustration with the Democratic Party’s ten-year rule.

We need to recognize and reflect on the fact that neo-liberalism set down deep roots in South Korea for various reasons, including the way the foreign exchange crisis was handled during the Kim Dae-jung and Roh Moo-hyun administrations. Amid this reflection and introspection, we need to offer a vision for taking the presidency again. If we take over thanks to anti-MB [Lee Myung-bak] sentiment without a clear vision or alternative, we may be met with more stagnation and frustration."
Kim was admitted to Seoul National University Hospital in late November and treated for cerebral venous thrombosis, but he ran into a crisis with a cerebral hemorrhage during his treatment. On December 27, he suddenly went into a fatal condition as several organs failed all at once. He passed away at 5:31 am Friday with his family members present.
Kim was unable to leave a final message to his family before his death. Now his blog entries are his last political statements.
Kim Geun-tae is seen as a symbol and unswerving mainstay of the democratization movement against dictatorship, playing a leading role in the campaign from the Dark Ages of the late 1970s until the early 1990s. He followed the path of resistance since 1967, his junior year as an economics student in the SNU business college, when he forcibly inducted into the military after taking part in campus protests against presidential election improprieties. After returning to school in 1970, he led demonstrations on campus and found himself a wanted man, on the run until the end of the Park administration in late 1979. He worked in labor campaigning in the Incheon area before joining the vanguard of the movement to bring down the dictatorship, spearheading the September 1983 establishment of the Youth Association for Democratization.
In September 1985, he was subjected to torture and beatings a total of ten times, which took him to the brink of death. He endured water torture and electrical shocks at the hands of such torture technicians as Lee Geun-an.
Kim's funeral is to take the form of the "Public Funeral for Kim Geun-tae the Democrat." The send off ceremony will be held on January 3, with his remains to be interred at the cemetery for democracy martyrs at Maseok Moran Park in Gyeonggi. Kim previously stated his wishes to be buried there.