On August 1991, Korean former “comfort women,” (women who were forced to serve as sex workers for the Imperial Japanese Army) including Kim Hak-sun, the first to speak publically about her experience, began to raise their voices. Before then, the issue had only been discussed quietly in postwar Japanese society. Previous testimonies had come from soldiers, partly in the form of romanticized memoirs of their time spent with the women.

One important new witness is Mizuki Shigeru, a leading Japanese manga artist, who provided detailed descriptions of a “comfort station,” that is, a military brothel, in his book “Soin Gyokusai Seyo [All of You Shall Die for Honor]” (14-15.) based on his personal wartime experience. In his afterword he wrote, “I can’t help but feel irrational resentment when I write war chronicles. Maybe the spirits of the war dead make me feel that way.” There Mizuki told of a soldier who shouted, “Thirty seconds for each!” and another who said, looking at the long queue in front of the station, “Hey Sis, about 70 more to go. Be patient.” This important historical testimony reveals how the Japanese army set up comfort stations in the very front lines at that time. (See Matthew Penney, War and Japan: The Non-Fiction Manga of Mizuki Shigeru)

The existence of comfort women, a suppressed issue that had almost been forgotten in postwar Japan, came to the fore in 1991. That was when the surviving comfort women started to talk about their own experiences. Women who were forced into providing sexual services started making people aware that the “comfort women” system had been nothing but sexual slavery. Until then, discussion of the issue had been considered taboo in Korea, and many victims had been unable to talk about it at all, even with their families.

In January 1991, some of Korea’s former comfort women and their supporters started a protest march
in the bustling lunch-hour street in front of the Japanese embassy in Seoul. They had only one demand: acknowledgment of the crime in the form of an apology from the Japanese government to each and every one of the former comfort women. The apology — meant to make the Japanese public widely aware of the harm done to these women as a historical fact — includes a vow to never repeat the same mistake, and to acknowledge that the issue has not been settled legally. 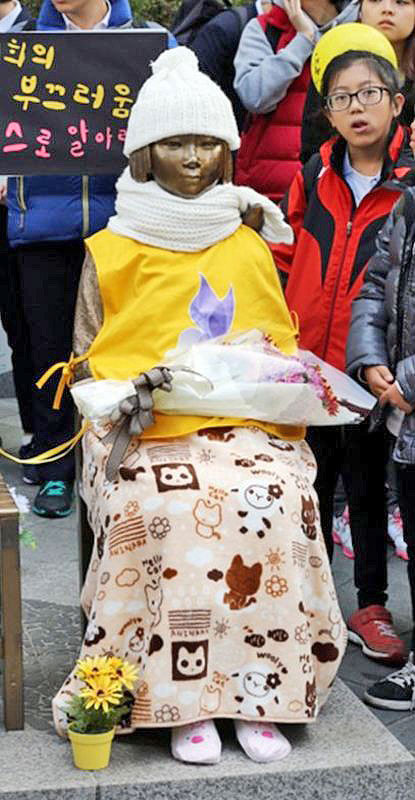 Every week for the past 20 years, 1,000 times now since the first demonstration, they have continued the Wednesday protest. On December 14, 2011, the group marked its 1000th protest. Simultaneous protests were also held in several places in Japan, and were attacked relentlessly by vocal opponents.
Video of the event and unveiling of the monument with English subtitles and Korean original.

The comfort woman statue outside the Japanese Embassy in Seoul is dressed according to the weather by citizens. Photo by Shin So-young. In Osaka, some shouted “Liars!” at the protesting women despite the fact that the Japanese government had long since acknowledged the existence of “comfort stations” and “comfort women” based on official wartime documents. A high school girl responded to the shouts by saying, “I wish it were a lie.” Don’t we all. More than anyone, the victims no doubt strongly wish that their gruesome experiences were just a nightmare.

On the 1000th day in Seoul, KwonHae-Hyo, the M.C. of the event, put it this way: “Thehalmeonideul’[respected “elderly women”] wish that they would not need to hold the Wednesday protest anymore after next week.”

On that day three actresses conveyed the feelings of the Harumoni in their dramatic reading of a Korean translation of this monologue by the American writer Eve Ensler.
Courtesy of Eve Ensler and V-Day

Say It
By Eve Ensler

Our stories only exist inside our heads
Inside our ravaged bodies
Inside a time and space of war
And emptiness
There is no paper trail
Nothing official on the books
Only conscience
Only this.
What we were promised:
That I would save my father if I went with them
That I would find a job
That it was better there
That I would serve the country
What we found:
No mountains
No trees
No water
Yellow sand
A desert
A warehouse full of tears
Thousands of worried girls
My braid cut against my will
No time to wear panties
What we were forced to do:
Change our names
Wear one piece dresses with
A button that opened easily
50 Japanese soldiers a day
Sometimes there would be a ship of them
Strange barbaric things
Do it even when we bleed
There were so many
Some wouldn't take off their clothes
Just took out their penis
So many men I couldn't walk
I couldn't stretch my legs
I couldn't bend
I couldn't.
What they did to us over and over:
Cursed
Spanked
Tore bloody inside out
Sterilized
Drugged
Slapped
Punched
Raped.
What we saw:
A girl drinking chemicals in the bathroom
A girl killed by a bomb
A girl beaten with a rifle over and over
A girl's malnourished body dumped in the river
To drown.
What we weren't allowed to do:
Wash ourselves
Go to the doctor
Use a condom
Run away
Keep my baby
Ask him to stop.
What we caught:
Malaria
Syphilis
Gonorrhea
Stillbirths
Tuberculosis
Heart disease
Nervous breakdowns
Hypochondria
What we were fed:
Rice
Miso soup
Turnip pickle
Rice
Miso Soup
Turnip Pickle
Rice Rice Rice
What we became:
Ruined
Tools
Infertile
Holes
Bloody
Meat
Exiled
Silenced
Alone
What we were left with:
Nothing
A shocked father who never recovered
And died.
No wages
Hatred of Men
No children
No house
A space where a uterus once was
Booze
Smoking
Guilt
Shame
What we got called:
Ianfu--Comfort Women
Shugyofu--Women Of Indecent Occupation
What we felt:
My chest still trembles
What got taken:
The springtime
My life
What we are:
68
79
84
93
Blind
Slow
Ready
Outside the Japanese Embassy every Wednesday
No longer afraid
What we want:
Now soon
Before we're gone
And our stories leave this world,
Leave our heads
Japanese government
Say it
Please.
We are sorry, Comfort Women
Say it to me
We are sorry to me
We are sorry to me
To me
To me
To me
Say it.
Say sorry
Say we are sorry
Say Me
See Me
Say it
Sorry.

This video prepared by Okano Yano documents the December 14, 2011 commemoration of the 1000th Wednesday demonstration before the Japanese embassy in Seoul and the unveiling of the statue (Korean and Japanese text).
This video is a presentation of a demonstration by the Women’s Action Network, Tokyo in support of the comfort women commemoration and analyzing the issues. (Video in Japanese with English text.)

Okano Yayo, a specialist in Western political philosophy and modern political theory, teaches in the Graduate School of Global Studies at Doshisha University. Her most recent book is Justice Rooted in an Ethics of Care: Reconceptualizing Equality (in Japanese).