Protests continue on Jeju Island, South Korea - also known in the region as the peace island - where the US and South Korean governments plan to build a navy base.

Though neither Seoul nor Washington have explicitly stated so, the base is expected to host US and South Korean Aegis destroyers equipped with missile defense systems, as part of the US strategy to contain China and in a regional context of increased focus on maritime security. With Jeju Island located very strategically at the center of Northeast Asia, the presence of a base there will certainly precipitate the escalation of the arms race in the region.

This winter as construction begins, neither snow, wind or a below-zero temperature have discouraged villagers of Gangjeong from protesting against the construction of the naval base, which threatens to bring more conflict in the region, as well as destroy soft coral habitats listed by the UNESCO as world heritage environmental sites, and disrupt fishing and the way of life of the people of Jeju Island. 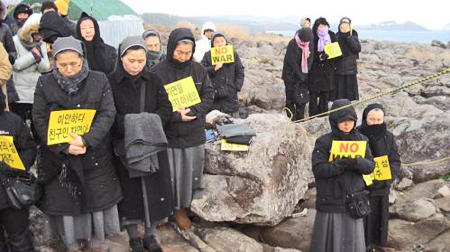 On Christmas Day, a Catholic mass for peace was held on the island, during which some 400 to 500 followers and Gangjeong villagers gathered to call for "the Jeju island of Peace [to be saved] from the naval base construction."

Seeing the construction of a base so close to China's coastline as a US provocation that will bring more conflict to their part of the world, the villagers held yellow signs reading "No War".

A few days later, 34 residents and supporters of Gangjeong village were arrested for trying to stop materials, notably cement trucks, from being brought onto the base's construction site. 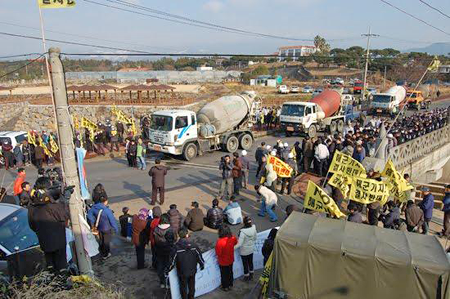 A popular tourist destination, Jeju Island has been chosen as one of 28 candidates for "The New 7 Wonders of the World", a campaign initiated in 2000 aimed at encouraging citizens around the world to select seven new wonders of the world by popular vote.

The coasts of Jeju Island were granted special preservation status under a law on the development of the Jeju Island enacted in 1991 and confirmed in 2004. The Island's government and navy, however, single-handedly cancelled the Island's special status in 2009 as part of their plans to build the naval base.

Gangjeong villagers have filed an administrative lawsuit in Jeju's local court to appeal the decision on the grounds that "the nature environment of the coastal areas of the Gangjeong village should be protected by the special law and regulations of the Island."

On January 7, the Gangjeong Village People's Council sent a request to Joint Chief of Navy Kim Sung-Chan to stop the construction of the base until the court issues its decision on the appeal. 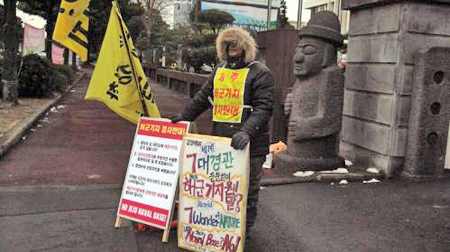 Civil actions and protests continue to take place, including a relay one-man protest since January 10 in front of the Island Hall, as well as statements of solidarity with the people of Jeju Island from Japan, the US and beyond.

For more information and updates, visit the No Base Stories of Korea blog here and Global Network Against Weapons & Nuclear Power in Space's Organizing Notes here.