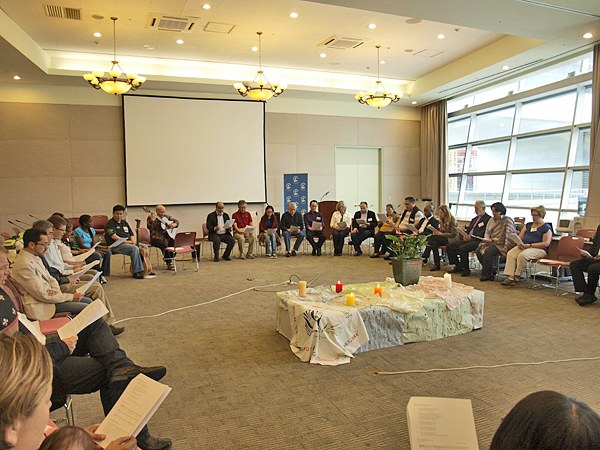 From Sept. 26 to Oct.2, the 32 international members of the Assembly Planning Committee, with 7 WCC staff members and 7 Korean hosts, met in Busan to begin putting concrete shape to the 2013 General Assembly.

This General Assembly is being conceived in the Korean concept of Madang, the assembly place. Madang is a very rich concept in Korean thought. During the APC meeting the cultural and theological background of Madang was presented.

First of all there is the Family Madang – the front yard, court yard, or open space in front of a house, which is the outdoor area in traditional Korean homes where a family’s daily household work takes place, and the center of social life, the outdoor living room. In madang, families celebrate birthday parties and weddings, and hold funeral services. History and stories of family life are recounted in the madang. It is also a spiritual place where a shaman guides rituals or the family prays together. The plain ground made of earth and sand is always clean, well swept, and tidy; a small flower garden may be at the corner of madang, as well as a vegetable garden. Trees may have been planted to give cool shade. At one corner of a madang, there would always be a well, from which fresh spring water was drawn for drinking, cooking, washing and playing. Madang is a space where soil and wind, water and the sun, the moon and the stars, the sky and clouds, birds and insects, flowers and trees, family members and travelers come and live together.

There is also the Public Madang. Madang functions as a market place, an open space at the center of a city or a village, or outside of a city gate. In the old days, Jang Madang or market madang was a bazaar where all kinds of farm products, household goods, daily commodities, and food stuffs were brought from places near and far for exchange, sale, purchase or just fun. It is an open public space where village folk, strangers, farmers, merchants, buyers, sellers come together to mingle for commerce and fellowship. 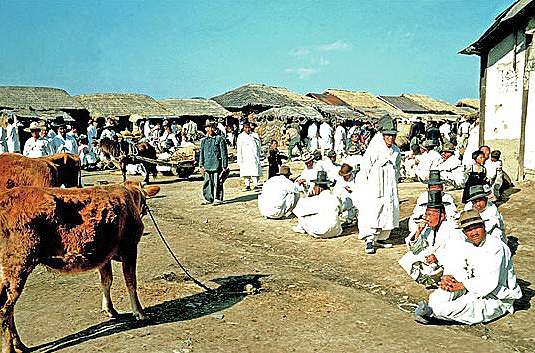 At harvest time a village madang would become a community harvest place for produce such as green peppers spread on the ground to turn red, and grain to dry and ripen. It would become a community threshing ground, where grains of rice would be separated from the stalk. It is a place for hard labor during the harvest, hopefully before the Chu Suk (Festival of August full moon) when the daylight sun is hot enough to ripe rice and fruits.

In the village open space, in the evenings this market madang becomes an open minjung theatre, lit with bon fires. Villagers, market commercial partners, buyers and sellers, all gather together for fun. A group of mask dancers might come to perform. Mask dance will be filled with the laughter, boos and cheers of the minjung audience as the dancers ridicule and poke fun at hypocritical religious leaders, and oppressive and exploitative local aristocrats and landowners. Sometimes a group of pansori, Korean traditional opera singers, would perform; at other times, acrobats and mini-circus groups might be invited.

Madang becomes a place for community festivals with sports and games as they celebrate special days such as Dan Oh (May Day) and Chu Suk, (August Full Moon Thanksgiving). Madang brings people together for unity and conviviality. Thus, madang will become the place of peace, tranquility and shalom where people become neighbors and partners to live and work together in peace and harmony.

There is also the Political Madang. The king’s madang, the inner court of king’s palace or the town square in front of city hall, was the place where royal politics were conducted. The king’s court was the place of dignity, authority, power and splendor, and also the place where criminals were judged and executed. Jesus was judged and condemned as sacrilegious in the Jewish high priest’s house madang, and as a political revolutionary crime against the Roman Empire in the Roman Governor’s court madang, and put to death in the open space outside the city walls. 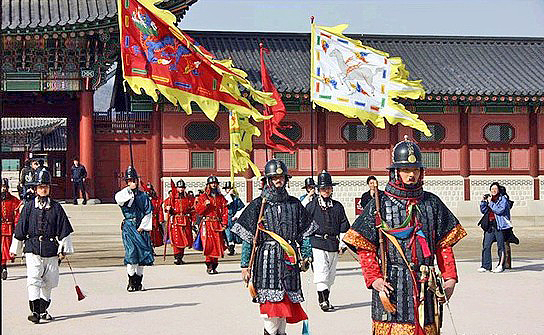 But political power and justice are always tested and honored. Justice in the king’s madang was always challenged by minjung outside the king’s court. In this historical sense, madang may be comparable to the Greco-Roman Agora, where the public gathered for political debates and decisions, political announcements, economic activities as well as legal actions.

Madang has been the ground of revolutionary politics as well. In Korea, the Tonghak farmers’ revolution of 1893 was triggered in the farm madang, and March First 1919 Independence Movement started at a public madang in the center of Seoul and spread all over the country. Koreans see the French and American Revolutions as minjung revolutions against political tyranny and colonial exploitation. In colonial history all over Asia, powerless minjung gathered together to fight against the colonial tyranny for justice, freedom and independence.

The Korean host Committee sees, in proposing Madang as a concept for the General Assembly, the mission of WCC is to restore life in the ecological world, to bring minjung back to madang, to recover economic and political justice, and to usher in peace and shalom amidst the divided and warmongering madang.

Our ecumenical mission today is to be united to insure that diversity will be respected and embraced in our church madang. In our madang, people from the East and the West, from the North and the South will come together to celebrate this convergence and conviviality, forming unity in mission. In our madang we can live and work together with world religions and people of other faiths for the humanization of all minjung. It is our mission together to witness the good news to the poor, to proclaim liberation of the captives, to enable the blind to see, and to let the oppressed go free (Luke 4:18). And in our madang, we will create fellowship and solidarity and share our blessing with each other for the coming Reign of God.