From May of 2010, all relations between South and North Korea were prohibited. As food shortages in the North worsened, civil society groups requested the opportunity to send food aid, but the South Korean government would not give its approval. The Korean Conference of Religions for Peace (KCRP) a group consisting of representatives of seven faith groups including Buddhist, Roman Catholic, Protestant, Confucian and others, proposed visiting the North, but were regularly turned down by the South Korean Ministry of Reunification. They continued to make the request, and finally early in Sept.  2011, received word their visit would come about. The 24-member group flew to Pyongyang on Sept. 21 (through China, as there are presently no flights permitted from South Korea to North), and were met at the airport by Korean Conference of Religions in North Korea (KCR), their northern counterparts. That first day they enjoyed a welcome dinner, at which the Vice Moderator of the Standing Committee in Congress (the government), and Jang Jae Un, the Moderator of the KCR, officially issued welcomes. The delegation was housed in the government guest house, the Morandong Chodessa.

On the second day they visited Kim Il Sung’s birth place, and then met in consultation with Church leaders. Together they agreed: 1. To annually have a religious conference with delegates from both North and South; 2. That as religious leaders they can contribute to the reunification issue; 3. To ratify the June 15 (2000) and Oct. 2 (2007) declarations; and 4. To press their respective governments to accept and act on those agreements. Later they met with the Vice President of the Asian Pacific Committee in North Korea, the committee which overseess issues between North and South, especially economic ones. He said that dialogue between North and South is good for the nation and its future, but presently there is distrust and disbelief between the governments. They also met with Kim Chung Nam, the Chairman of Congress, who acknowledged their coming to be helpful to the process of reconciliation. 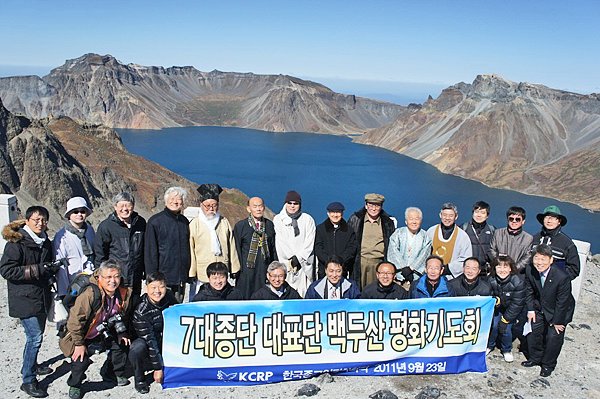 On day three day they visited Baekdu Mountain, the fabled birthplace of the Korean people. At that significant place, they prayed together for unity and peace in the Korean peninsula.

On the last day each separate faith delegation visited the headquarters of their Northern faith community. Kim Young Ju visited with the leaders of KCF. They discussed what needs to be done by KCF so that NCCK will receive government approval to send humanitarian food aid, and also the WCC General Assembly in 2013. When Kim Young Ju expressed his hope the KCF will attend, they pointed out the political situation would have to change for it to be possible for them to come to Busan. However, the KCF will be involved in gathering signatures for the Peace Treaty program.

This historic meeting holds many hopes and prayers for future understandings in Korea.

National Council of Churches in Korea

A Letter to Bush