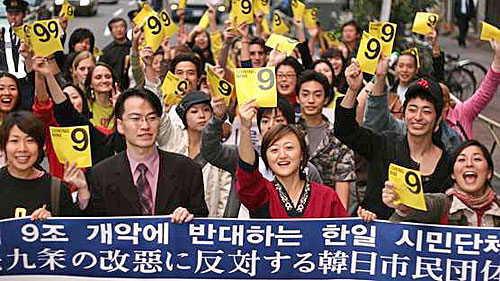 Today, Japan’s peace constitution is – probably more than ever – in danger.
In a context of exacerbated regional tensions, Prime Minister Abe Shinzo is accelerating his efforts to change war-renouncing Article 9, allow Japan to exercise collective military action, and bolster the country’s security and military posture regionally and internationally.

Under the cover of a new doctrine of “pro-active pacifism based on the principle of international cooperation”, Abe has over the last few months pushed through a number of initiatives that overstep Article 9 and some of the country’s longstanding peace policies. These measures include formulating a new national security policy; establishing a National Security Council; revamping defense guidelines;  announcing yet a further increase of the country’s military budget for 2014; and drastically relaxing the long-held arms export ban. He is now seeking to loosen Japan’s ban on exercising the right of collective self-defense.

In light of popular resistance and political skepticism to amending Japan’s peace clause, the current administration has adopted a new strategy. Rather than push for constitutional amendment frontally, this new backdoor approach seeks to change the government’s traditional interpretation of Article 9 and revisit a number of the key principles that have governed Japan for decades.

Article 9 of the Japanese Constitution:
“ARTICLE 9. Aspiring sincerely to an international peace based on justice and order, the Japanese people forever renounce war as a sovereign right of the nation and the threat or use of force as means of settling international disputes. (2) To accomplish the aim of the preceding paragraph, land, sea, and air forces, as well as other war potential, will never be maintained. The right of belligerency of the state will not be recognized.”

Japan’s Peace Pledge
Japan adopted its war-renouncing constitution following World War II. Article 9 is a pledge to Japan itself and to the world, particularly neighboring countries that suffered under Japanese invasions and colonial rule, to never repeat its mistakes.

Despite constitutional restrictions, Japan has developed and gradually expanded its Self-Defense Forces (SDF) to become one of the world’s top military spenders and one of the most advanced militaries in Asia. Yet, to date, the existence of Article 9 – and the Japanese people's support for its principles – have forced the government to maintain peace policies, including non-export of arms, a non-nuclear policy, and not deploying the SDF for active combat.

Global Impact of Article 9
Article 9 is not just a provision of the Japanese law. It also acts as an international peace mechanism towards reducing military spending, supporting conflict prevention, promoting nuclear-weapon-free zones, recognizing the human right to peace, and more.

Risks for Regional/International Peace and Stability
At the regional level, Article 9 has served as “the foundation for collective security for the entire Asia Pacific region."

In today’s context of exacerbated regional tensions involving Japan, China, and the Koreas, the debate over revising Article 9 – coupled with the passing of a number of measures that significantly undermine Japan’s longstanding pacific policies, as well as a series of controversial remarks on historical and reconciliation issues  – threaten to destabilize the fragile peace in Northeast Asia, triggering an arms race and escalating into a regional – if not global – conflict.

Global Article 9 Campaign
Launched in 2005 by a coalition of civil society organizations in Japan, the Global Article 9 Campaign seeks not only to locally protect Article 9; it also acts to educate people around the world about existing international peace mechanisms such as Japan’s Constitution and encourage governments to work towards disarmament, demilitarization and a culture of peace.

Call for support
Japanese civil society is mobilizing and seeking your urgent support – for Japan’s peace constitution and against the Japanese government’s trend of nationalism, historical revisionism and its path to militarism that would have grave consequences for Japan, the regional context and international peace.