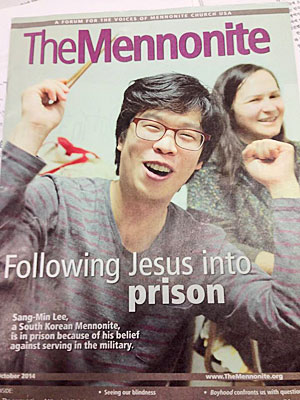 Dear friends,
It's an absurdly hot day. Here the fan turns off at 11 pm, and yesterday as soon as it turned off I woke up because it was too hot. This year's first "tropical night." Now that I've fought the heat all day and I poured some cold water on myself and decided to write a letter, I see that it has suddenly started raining. I'm thinking the rain should have come a little earlier. Anyway, that's how it is for me, but I hope all of you aren't suffering from the heat. In weather like this it's really tough to control emotions. Ah, I want go to work right away. There's air conditioning at the barbershop.

I think this might be the last letter I send. Come to think of it, since it's the last one, there isn't much news to share...I'm thinking a lot of all the people I'm thankful for. My support group's care, people that took care of me well, people who gave me news through letters, people who came the long way to see me in the midst of busy schedules, people who supported me regularly. On top of that, the people who thought of me and prayed for me...As I live, I'm not sure how I can repay this huge light you've brought to me. Later I will greet you and contact you personally. Thank so very much!

Now, 19 days before my release, I'm looking back on the past year and two months. No, that's not it. Truthfully, my time in prison began in the summer of 2007 when I first began to think seriously about conscientious objection. That time of worrying and deciding was so hard , that the moment I was imprisoned was almost a relief. Of course, I can't tell that long story here. Anyway, by chance I came to the Southern Correctional Facility, and somehow I've been cutting hair for a little over a year now. It's a relief that I got something out of going. But when it's all said and done, prison is a "Prison of People." Time in prison has its ups and downs, and like looking in a mirror, it is to many people a time to reflect on themselves. It's precious experience where much is received and many things are realized. Transcending everything is fantastic! (joke!)

Now my heart is that of a long-term prisoner looking ahead to his release. Though it's a little funny considering it's only been a years and three months, I very rarely feel like I'm being thrown back into the world in a zero-base kind of way.

However, I tried thinking back again to my thoughts and feelings when I first made my decision to become a conscientious objector. It isn't that noble people make noble decisions, but rather that noble decisions create noble people. These words are a great comfort to a "shrink back" kind of person like me. Explaining people like me, if we were to look at a graph of my life as a conscientious objector, it's not a sharp bending point of centraflexure; instead where I stand now, where my two feet are now would be the coordinates. I won't forget these coordinates and will try to live to the best of my ability.

The people I love, music, movie drama, webtoons, books, food, bicycles and everything else. Like the liquor left for pickup at your favorite pub, my heart is full at the thought of enjoying these things again.
See you soon when I get out
Bye!