On The Symposium for Ms. Elsbeth Strohm's 90th anniversary 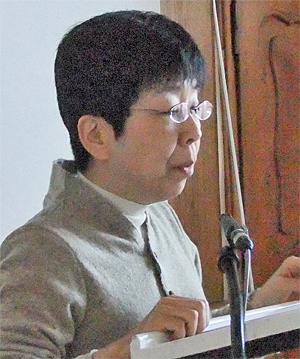 On behalf of the clients, volunteers, and coworkers of Kibo no Ie, as well as the members of the Kamagasaki Committee, it is my great pleasure to wish you a heartfelt Happy Birthday on your 90th anniversary.

The other day, I received a postcard from Mrs. Shigeno Ryoko. She wrote how she fondly remembers her encounter with you in Kamagasaki, and how her sons, who were 5 and 7 at that time, have pleasant memories of you and the friends in Sannō Kodomo Center, for which the whole family thanks you so much. When I spoke with her on the phone, she asked me to send you her regards.

This is the second time I meet Frau Strohm here in Schwanberg. The first time was in the summer of 2004. At that time, I interviewed her about the Diakonia in Japan Evangelical Lutheran Church (JELC). She kindly shared her personal experiences. Among them, several made a lasting impression on me. Let me tell you three of them.

One is the story about the Good Samaritan.
Frau Strohm said: "Christianity is Diakonia in the world. Consequently, the Christians ought to become Good Samaritans, because those who suffer in the world are waiting for the Good Samaritan. If you are a Christian, you help them as a matter of course." Then she told me of a trying experience she had in Osaka Church. It made her leave the church, but at that time someone said to her, "You have been freed, haven't you?" and she told me: "I felt getting separated from the Church organization made me able to meet freely with God. To be free is very important for Diakonia. I think, the idea of becoming free is needed among the Japanese. The Samaritan, too, freed himself from the shackles of the law. Therefore he could help that man." I find this very impressive.

The second impressive point was Frau Strohm's story of not having room for thinking of her work in terms of Diakonia at the time she became active in Kamagasaki, because she was caught between the resident pastor's wish for her to proselytize to catch believers and the realities of Kamagasaki. This surprised me, because I had a strong impression of her from 25 years before the interview, when she enthusiastically asked us, the JELC youths, "Will any of you remain unmarried and devote your entire life to Diakonia in Kamagasaki?" It is regrettable to learn that when Frau Strohm first began her work in Kamagasaki, she had troubles getting the cooperation from the surroundings and was under a psychological stress.

The third thing that deeply impressed me was Frau Strohm's words: "At that time, JELC had no idea of Diakonia." She went on and told me:

"I thought, sermons in the Japanese worship service were like Bible studies. I know that Christianity's history in Japan is not that long, so I could understand the necessity. However, I didn't feel any consolation in the sermons. The pastors didn't talk about Diakonia. There was no guidance for the individual's daily life.

Diakonia in Germany has a history of 200 years. Several pastors who found people in society in need of assistance raised money and founded a motherhouse or institution. However, the JELC I knew showed no interest in this history. This may explain why it could stop this kind of necessary work with such ease when it felt the economy wasn't there."

I am still full of admiration for Frau Strohm's enthusiasm that made her persevere in her work with Kibo no Ie in days when the word Diakonia had not yet permeate the language of Japanese pastors let alone their congregations.

As a matter of fact, it is my impression that the Japanese church still does not understand Diakonia correctly. Thanks to the passion of Frau Strohm and other missionaries, the awareness within JELC has been increasing over the years, but when I use the word Diakonia in talks to students of theology at Doshisha or Kwansei Gakuin Universities, hardly anyone understands what I mean. Among those who actually know the word, many believe it refers only to the narrow sense of social welfare activities done by Christian churches, but very few think the way Frau Strohm told me in the interview that Diakonia is the action of Christians as a matter of course to help the suffering in the world like the Good Samaritan.

However, over the latest ten years the relations between Kibo no Ie and JELC have improved. We no longer hear the voices saying Kibo no Ie should be shut down for financial reasons. Today, the headquarters of JELC pay a third of the pastor's salary. Another one-third is paid by the West Japan District and the remaining part by the pastor's residential Toyonaka Church. The relation is not confined to economic support. Students from the Lutheran University come to study at Kibo no Ie. The number has increased of students who do practicum in churches in the Kansai area while staying in Kibo no Ie and simultaneously doing practical training there. The pastor who will serve at Kibo no Ie from this April is a woman who did her practicum with us seven years ago.

It may seem insignificant, but the distance between Kibo no Ie and JELC is getting shorter. It would have been wonderful if that change had taken place already when Frau Strohm was in Japan.

Now, let me address the changes Kibo no Ie has undergone in the past years.

Kibo no Ie is still supporting alcoholics. However, Kibo no Ie's ways of supporting have been adjusted according to the needs. For quite a number of years, our "rehabilitation program" is offering the clients various kinds of therapies and programs that day for day support them individually to be able to live without alcohol and to recover their life.

More specifically speaking, there are programs focused on using the body and the five senses such as gardening, tea time, ceramics, cooking, swimming, and gymnastics, programs for creating individual awareness like small group discussions and individual counseling, and then the Musubikai on Fridays.

Nowadays, Musubikai is primarily is for participants of the rehabilitation program. Usually we cook and eat together two out of four times. We think, preparing and sharing the dinner is the very first step in practicing Diakonia.

Two years ago, we started consultation for those living on the street instead of the night patrols. In the past few years, the number of participants in the night patrol had increased, and the aim of the patrol had become to distribute blankets and onigiri so we didn't have enough time for consultation for those who are forced into homelessness. Kibo no Ie wishes to help victims of homelessness escape the life on the street, so we decided to stop the night patrols with many participants and replace them with small groups that mainly circulate the Shinsaibashi and Honmachi areas. We patrol once a month in the warmer seasons and weekly during the winter. Through this consultation some have joined the rehabilitation program of Kibo no Ie and stopped drinking alcohol, and some, without alcohol problems, have found a job and started working.

At Kibo no Ie we gradually adjust our activities as we assess the social and contemporary needs. We regularly examine the content of our program because we strive to do what is necessary at the moment. That is because Kibo no Ie takes Diakonia seriously. We understand Diakonia to be one of the important ideas on which Frau Strohm based her work of Kibo no Ie. And for us in Kibo no Ie, this will always remain important.

In Der 90. Geburtstag, James, the butler, asks, "same procedure as last year?" but in the Frau Strohm, I doubt she have had a life like Miss Sophie. She paid for Kodomo Center and Kibo no Ie of her own pocket, so I imagine it would have been difficult to have a life in luxury with different wines for each dish. But she finds nourishment in the bread and wine of Christ so during the many changes of the world she lives freely. It is my impression that, as a Christian, unbound by form, she always reaches out her hand when someone is in need, and on this attitude your Kibo no Ie is founded.

Kibo no Ie too, as an institution of Japan Evangelical Lutheran Church, seeks to act free of all bindings to sensitively meet the changes of society.