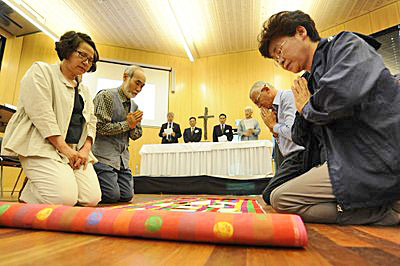 Surrounded and embraced by representatives of the wider international ecumenical community within this consultation of 54 participants representing 34 churches and related organizations from 15 countries, delegations led by the leadership of both the Korean Christian Federation (KCF) from the Democratic People’s Republic of Korea (DPRK) and the National Council of Churches in Korea (NCCK) from the Republic of Korea (ROK), met at the Chateau de Bossey, Switzerland, on 17-19 June 2014.

The consultation was preceded by a meeting of the Steering Group of the Ecumenical Forum on Peace, Reunification and Development Cooperation on the Korean Peninsula[1] (EFK) held on 16 June 2014, from which we received a report and recommendations.

During the consultation, we renewed old relationships, made new friendships, shared fellowship meals, talked and sang. Sharing in the spirit of Pentecost, we drew spiritual joy and renewed energy from our togetherness in worship, praise, Bible study (led by NCCK and KCF representatives) and from sharing the Lord’s Supper together in a joint eucharistic worship.

We meet in the year of the 30th anniversary of the Tozanso consultation convened by the World Council of Churches (WCC) in 1984. We give thanks to God for the great vitality and sense of urgency to which that consultation gave rise in the worldwide ecumenical movement. It inspired a generation of Christian leaders in Korea and in the northeast Asian region to engage actively in public witness and advocacy for peace, justice and the reunification of Korea.

Participants in the Tozanso consultation developed the essential framework for ecumenical cooperation and disciplined engagement that has made possible direct contact between official church structures in the North and in the South. That has given hope to Koreans in both halves of the divided peninsula and others in the diaspora around the world and engaged them in acts of solidarity.

However, more than a generation later, it is not enough to celebrate past achievements. There are significant changes in the social, economic, ecological and political contexts of the peninsula and the surrounding region that pose new threats. We have committed ourselves to sharing the grace we have received and the lessons we have learned with the youth of our churches today to encourage and aid them as they seek to confront the new challenges that lie ahead.

A testimony by Ms Gil Won Ok, a surviving victim of Japanese military sexual slavery during the Second World War, served to place our quest for justice and peace on the divided Korean peninsula within a broader historical framework. We are moved and commend her witness and call that there should be no more wars.

The stories of solidarity and networking by the women survivors in pursuing their call for justice provided a source of strength and inspiration. It also reminded us of the importance of recognizing and affirming the role of women as active participants in peace-making, as all too often they are the ones who suffer the most during wars. True peace cannot be realized without their participation and contribution. The shared pain of women on both sides of the 38th parallel requires a constructive space in which they can meet to encourage each other and to strengthen the commitment of women to engage the peace and reunification process with renewed energy and enthusiasm. Such space can also lend wisdom to overcoming the oppressive structures of patriarchy that exclude and marginalize women.

The statement on peace and reunification of the Korean peninsula adopted by the 10th Assembly of the WCC held in Busan on 30 October-8 November 2013, provides a solid foundation for a new era of international ecumenical engagement in the pilgrimage of justice and peace on the Korean peninsula. We reaffirm the recommendations and commitments expressed in that statement, and the prophetic vision and ecumenical objective of peace and reunification of  Korea . We envisage a renewed process of encounter and cooperation between Korean churches and Christians in both North and South, accompanied and supported by the WCC, churches and specialized ministries around the world.

We underline the fundamental importance of mutual encounter with each other as Christians and as human beings, such as we have been privileged to experience during this consultation. It is through such encounters and the relationships that we foster, on the basis of our shared Christian identity and spiritual resources, that we may help to deconstruct enemy images, promote mutual understanding and friendship, and challenge the politics of division and the psychology of demonization. We will continue to develop resources to counter the prevailing discourse of hate generated in the media which perpetuate enemy images and division.

We look forward to a further, larger international ecumenical consultation, to be organized through the collaboration of the WCC, CCA, KCF and NCCK, in 2015 (preferably in August) – marking the 70th year of the division of the Korean peninsula. We hope that in this next consultation an even wider circle of churches and related organizations can be brought together to strengthen and give practical effect to this ecumenical commitment to accompanying the people and churches of Korea in the search for justice, peace, reconciliation and reunification. This consultation should involve broader participation of youth and women, and from other regions of the world, including Africa, Latin America and the Middle East, and also be an occasion to share lessons from other contexts in which healing and reconciliation have been experienced or are needed.

In the meantime, particularly in anticipation of the forthcoming meeting of the WCC central committee that will take place on 2 to 9 July 2014 in Geneva, we wish to communicate the following concerns and recommendations for their consideration and action in relation to the future plans of the Council, based on our conversations and prayerful deliberations during our meeting:

• We request that the WCC explore the potential of establishing a programmatic structure that can provide consistent coordination and facilitation for the ecumenical advocacy and accompaniment of the people of Korea on the pilgrimage of justice and peace.

• We recommend that the WCC encourage member churches around the world to observe the Sunday before 15 August each year (starting with Sunday 10 August 2014) as the “Sunday of Prayer for the Peaceful Reunification of the Korean Peninsula.” We request the WCC to translate the 2014 Joint Prayer for Peace and Reunification of the Korean Peninsula (prepared jointly by NCCK and KCF) into the official WCC languages and to transmit it to the WCC’s global constituency for use this year, asking WCC member churches also to translate the Joint Prayer into local languages for even wider dissemination. We commit ourselves and our churches and organizations to disseminate and promote the Joint Prayer widely within our own national contexts, and we ask WCC member churches and partners to accompany prayer with action, addressing the issues highlighted in the Joint Prayer. We encourage the WCC, KCF and NCCK to work together in developing and suggesting additional resources that can further assist churches around the world to accompany the pilgrimage of justice and peace on the Korean peninsula.

• We also suggest that, with the Joint Prayer, a letter communicating the outcomes of this consultation be sent to the member churches and ecumenical partners.

• We ask the WCC also to promote annual ecumenical meetings/consultations, involving Christians from North and South Korea, in conjunction with the Sunday of Prayer for the Peaceful Reunification of the Korean Peninsula.

• We encourage WCC member churches and related organizations to undertake visits to churches in both North and South Korea, in order to build relationships, to develop a deeper understanding of current realities on the peninsula, and to explore ways of strengthening practical ecumenical solidarity for peace and reunification on the Korean peninsula.

• We request churches and related organizations around the world to advocate with their governments for the lifting of all sanctions against the DPRK, including those imposed by the UN Security Council; the cessation of military exercises around the Korean peninsula; and the ending of all hostile policies against the DPRK, as steps toward establishing the necessary conditions for peace and reconciliation. We believe that the implementation of the June 15 Joint Declaration and the October 4 Joint Agreement by the governments of North and South Korea will contribute to creating the conditions for peace and reconciliation on the Korean peninsula, and we encourage both sides to do so. In this vein, we ask that a letter be sent to the UN secretary general conveying our concerns and recommendations.

• Following both the 10th Assembly statement and the recommendations of the EFK Steering Group, we highlight the need for an international campaign for a Peace Treaty to replace the Armistice Agreement. We invite the general secretary of the WCC to write to member churches encouraging their participation in this campaign. We also urge member churches to make relevant approaches to their respective governments.

• We encourage the WCC to engage with a wide range of relevant partners in pursuing the ecumenical movement’s initiatives for justice, peace and reconciliation on the Korean peninsula and to strengthen their impact within the international community.

• We wish to encourage wider and stronger ecumenical engagement in the EFK, and in its activities related to peace and reunification and to ecumenical development cooperation.

• In this critical historical moment, we acknowledge the urgent need to transmit to a new generation of young people an understanding of the causes of the continuing division of the Korean people and of the current realities of the peninsula and region, and a vision and passion for justice, peace, reconciliation and reunification.

• We call upon the WCC, in cooperation with member churches and related organizations and youth networks (including the World Student Christian Federation, the World YWCA and the World Alliance of YMCAs), to develop a Peace Ambassador programme to equip young people to work for reconciliation and peace on the Korean peninsula.

• Many young people who participated in the Busan assembly and related activities developed a deep awareness and compassion for the pain of the divided Korean people. We hope that many of them will be invited to the next consultation in 2015. We strongly recommend that the churches and organizations participating in this event should include youth delegates.

• Opportunities should be created for young people and women, as well as leaders and decision makers, from all parts of the world to visit both parts of Korea. The possibility of facilitating meetings of young people and women from North and South Korea – if necessary in third countries – should also be further explored.

• We strongly urge the Japanese government to acknowledge the atrocities of military sexual slavery (comfort women), to present a sincere and honest apology, and to take reparative measures to compensate the victims.

• Ways should be found to record and preserve for future generations the testimonies of the historical witnesses to the pain and suffering of the division of the Korean people along with stories of strength and hope.

“As Jesus came near and saw the city, he wept over it, saying,
‘If you, even you, had only recognized on this day the things that make for peace!
But now they are hidden from your eyes.’”
(Luke 19:41-42)
[1]The Ecumenical Forum on Peace, Reunification and Development Cooperation on the Korean Peninsula (also known as the Ecumenical Forum for Korea) serves as a cooperative endeavour of churches, national councils of churches, mission organizations and church-related development agencies in cooperation with the WCC, Christian Conference of Asia and other ecumenical bodies(http://ecuforumkorea.org/).