FUKUSHIMA — Tokyo Electric Power Co. has settled with the family of a woman from Minamisoma, Fukushima Prefecture, who died as a result of the meltdown calamity at the utility's stricken nuclear plant, sources said. 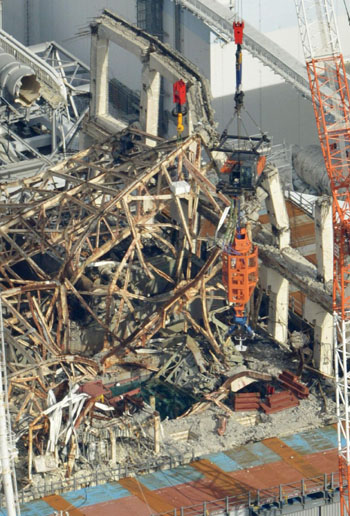 This is the first time Tepco has admitted a causal link between the death of an evacuee and the nuclear disaster at its Fukushima No. 1 plant. In all, 183 settlement cases have been made public by a government-run nuclear accident dispute settlement center.

According to the sources, the woman, who was hospitalized in the Odaka district of Minamisoma, died in April last year after she was forced to evacuate at the start of the crisis, the worst such incident since the 1987 Chernobyl disaster.

Through mediation by the center, Tepco has agreed to pay ¥14.65 million to the family, including ¥12 million for her death, the sources said.

The Odaka district is located within 20 km of the plant and was designated as an exclusion area soon after the disaster started.

Tepco's acceptance of a causal link between the disaster and evacuee deaths may open the way for more compensation demands and inevitably add to the financial burden already felt by the embattled utility as it tries to decommission the Fukushima plant over the coming decades.

In a related development Thursday, Tepco removed a steel beam from a spent nuclear fuel pool at the plant, using a remote-controlled crane, the utility said.

The 7-meter steel beam, weighing 470 kg, dropped into the water-filled pool in the reactor 3 building in September when a similar crane was used to remove debris from the upper portion of the building.

Another steel beam was found during a later camera survey in addition to a 30-ton fuel exchanger and concrete pieces, which dropped into the pool when a hydrogen explosion occurred at the building after the March 2011 earthquake and tsunami crippled the plant.

Tepco has confirmed that the steel beams and fuel exchanger have not touched the nuclear fuel rack. But it has noted fuel assemblies could have been damaged by the shock of their fall into the pool.

Tepco plans to remove the concrete pieces, the other steel beam and the fuel exchanger before extracting a total of 566 nuclear fuel assemblies from the pool starting in early 2015.

NAGOYA — Chubu Electric Power Co. will increase the height of a seawall it is building at its Hamaoka nuclear power plant to 22 meters as part of its efforts to counter quake-triggered tsunami.

"We've decided to increase the height of the seawall to prepare for largest-class tsunami," company President Akihisa Mizuno said at a news conference Thursday, referring to the decision to make the seawall 4 meters higher than earlier planned.

The seawall at the plant in Shizuoka Prefecture is expected to be capable of blocking 19-meter-high waves the government has estimated could possibly hit if a huge earthquake hits the Tokai region in central Japan, allowing flooding to occur only through water intake chambers.

The cost for the additional construction work will reach several billion yen. The utility will not change its plan to finish installing tsunami countermeasures by next December.

The government had Chubu Electric halt the reactors at the Hamaoka plant in May last year until sufficient countermeasures are taken, given it is known to be standing on an assumed epicentral area for a massive earthquake.

The government had the plant shut down after Tokyo Electric Power Co.'s Fukushima No. 1 plant experienced three core meltdowns in March 2011.