At a press conference in Seoul on September 9, 20 civil society organizations of South Korea have issued an open letter to President Barack H. Obama highlighting the concerns to the recent U.S. decision to take military action in response to the use of chemical weapons in Syria. 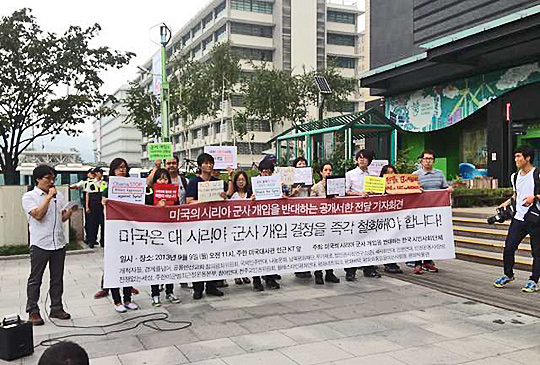 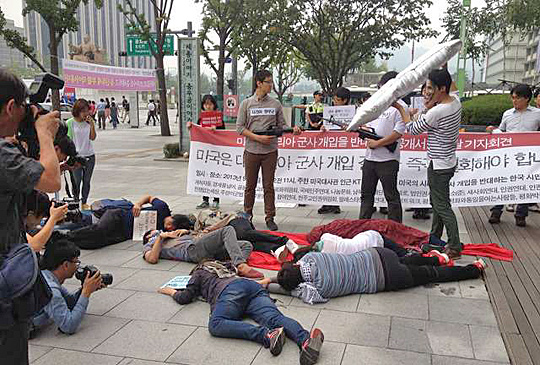 (9 September 2013, Seoul)
We, civil society organizations in the Republic of Korea, are writing to you today to express our deepest concern regarding the recent U.S. decision to take military action in response to the use of chemical weapons in Syria. We believe that U.S. military intervention cannot provide a solution and will only aggravate the situation in Syria. Military action in Syria will bring much confusion to the country due to the direct damage that would be caused by a strike as well as any counterattacks by Syrian armed forces in response to such an action. It is evident that more civilians will be sacrificed in the midst of the confusion caused by the strike.

Historically, foreign military interventions have escalated conflicts and caused a vicious cycle of violence. In the case of the Iraq war and in the Libyan civil war, military intervention by foreign states only worsened internal armed conflicts. Fundamental responsibility for the two-and-a-half-year-long war in Syria lies with those states backing the conflict. The international community has aggravated the internal conflict by supporting Syrian government forces or armed opposition groups rather than taking an interest in protecting the people of Syria. The first step towards solving the problem in Syria should not be a strike which will bring about another massacre, but a suspension of military aid.

Despite recent statements from various states including UK and Germany that they are not going to participate in the military action in Syria, the U.S. government has expressed its strong will for unilateral armed action. In any case, a unilateral military attack without the approval of the UN Security Council constitutes a clear violation of international law and will be faced with strong condemnation from members of international community hoping for the peaceful settlement of this matter. At the time of the Iraq war, then Senator Obama raised his voice against engaging in a war without the approval of the UN. However, the decision to intervene militarily in Syria does not seem different than that of former President Bush. The U.S. government should pay due attention to domestic and international condemnation regarding the proposed military intervention.
Surely, whoever used chemical weapons in Syria should be held accountable for the severe casualties. The use of internationally banned chemical weapons cannot and should not be condoned, and is evidently a wrongful act regardless of who uses them. However, responding to this wrongful act with military action is nothing but a repetition of the same wrongful act. The spirit of the international communities' ban on weapon of mass destruction(WMD) also applies to the ban on reckless military action. There should be an accurate investigation into the chemical weapon attack and those responsible should be referred to the International Criminal Court in accordance with international law. If U.S. forces proceed with a military attack in a situation where the analysis of the initial investigation by the UN investigation team is not finalized, it could attack relocated or concealed chemical weapon leading to serious secondary casualties.

In addition, according to various media reports on the US’s Syria strike plan, the possibility of using cluster munitions - internationally banned and inhumane weapons - is being raised. The international community is expressing its grave concern regarding the possible use of cluster munitions such as the Delta model of the Tomahawk Land Attack Missile (TLAM), which carries BLU-97 cluster munitions and is likely to be used for the strike. Cluster munitions are defined as inhuman weapons just as chemical weapons are defined as WMD, and their use and production are strictly banned by the Convention on Cluster Munitions, which entered into force in 2010. It would be self-contradictory for the U.S. government to use inhumane weapons in its military action while calling for punitive measures for the use of chemical weapons. The U.S. government should retract its decision to take military action including the possible use of cluster munitions.

The civil war in Syria has been filled with massacres and retaliations by government forces and armed opposition groups. The situation has been worsened by the interventions of external armed groups, resulting in more than 100,000 dead and millions displaced. Nevertheless, states have continued to aggravate the conflict either by supporting Syrian armed forces or armed opposition groups instead of making effort to resolve the situation. The U.S. government should immediately stop its military intervention and aid and call for other countries to do the same. The U.S. government's role should be to seek a peaceful settlement to the conflict in Syria by offering mediation between warring parties so that peaceful negotiations can be initiated. The U.S. should be calling for international support to end the suffering of the Syrian people. We sincerely hope that the U.S. government chooses to stand in solidarity with the suffering people of Syria instead of engaging in military action.