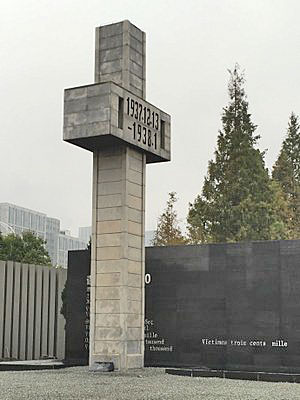 The meeting marks the first time a WCC governing body has met in the People’s Republic of China. Chinese Christian leaders also helped facilitate a meeting between WCC and the State Administration for Religious Affairs in China.

The executive committee also visited the Nanjing Massacre Memorial. “We shared in prayerful remembrance of the more than 300,000 victims of this massacre,” said Dr Agnes Abuom, moderator of the WCC central committee. “We deeply regret that these atrocities have still not been recognized and apologized for by the Japanese government.”

Visiting the memorial was another experience underlining the imperative of the pilgrimage of justice and peace in today’s context when such crimes against humanity, war crimes and genocide are still taking place, said Abuom.

WCC leaders acknowledged evidence that China has experienced enormous economic growth over the last decades of peace and stability in the country. “Millions have been lifted out of poverty by this growth, raising renewed hope of the possibility of eradicating the most extreme forms of poverty globally,” said Abuom. “In addition, we have noted with appreciation China’s example and leadership in ratifying the Paris Agreement on climate change and in scaling up its investment in developing renewable energy.”
At the same time, China’s rise in the global arena has been accompanied by new tensions and disputes, and the WCC executive committee called for resolutions through dialogue and diplomacy.

Abuom and the rest of the executive committee expressed their gratitude at seeing and hearing about the witness and diakonia of the churches in China.

“We have been greatly impressed by the churches’ outreach to people of all ages, the commitment to ecumenical and interfaith relations and cooperation, and the scale and breadth of the social services provided by the churches and their institutions,” she said.
-------------

The Letter to the China Christian Council and the Three-Self Patriotic Movement,
17-23 November 2016, China