WCC meeting in China looks at changing demography of Christianity, freedom of religion 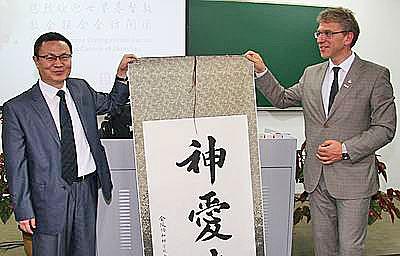 "The growing church in the People's Republic of China today presents four characteristics: independent and autonomous, post-denominational, fast growing and faced with lots of challenges and emerging difficulties," said the Rev. Gao Feng, president of the China Christian Council (CCC), in a speech in China on 14 June.

Feng was speaking at the 51st meeting of the World Council of Churches (WCC) Commission of the Churches on International Affairs (CCIA) being held in Nanjing. This is the first officially sanctioned WCC and CCC sponsored meeting held in China since the formation of the WCC in 1948.

Speaking on the topic of the "Church in China Today" at a seminar on "Understanding China" Feng said "the demographic situation of Christianity is fast changing; however, there are more challenges that we also are faced with."

"Many grassroots churches don't have ordained pastors," he said. "Lay leaders who manage churches and preach on Sundays may not have formal theological education; seminaries lack faculty members and library resources. The changes in the religious policies of the Chinese government after the cultural revolution, especially since the early 1980s, have helped the reopening of churches, setting up new seminaries and reopening old ones and printing Bibles."

In a separate session of the seminar on the role of religion in creating a harmonious society in China and religious policies in China, the Vice Minister for Religious Affairs of the People's Republic of China, Jiang Jianyong, said, "If there is no religious harmony, then no social harmony exists in society and it is in this context that the government recognizes and encourages the role of religions in developing a harmonious society."

Jianyong added that China gives freedom to all religions, but expected that religion and religious activities would not interfere with affairs of the state and its administrative matters. In China, there is no predominant religion and all religions are treated equally, he said. The Chinese government believes that the "state cannot develop or extinguish any religion".

Jianyong, who at the time was head of the Jiangsu Provincial State Administration of Religious Affairs (SARA), visited the WCC central offices in Geneva, Switzerland in 2003 as part of a delegation of SARA officials.

As part of the visit of CCIA members to China, Rev. Dr Olav Fykse Tveit, WCC general secretary, told students and faculty of the Nanjing Theological Seminary that the "church in China is part of the body of Christ and an integral part of the global fellowship of churches around the world."

During a visit to the Amity press, Tveit received the 80th million Bible printed and published in China by the Amity Foundation and the China Christian Council. 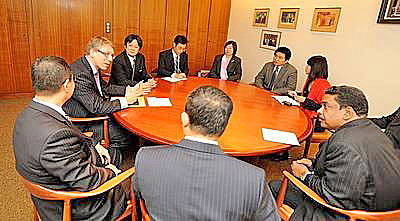 Delegation from the China Christian Council meeting
with the WCC general secretary in Geneva, Switzerland, 2010.

The World Council of Churches (WCC) will, for the first time since its 1948 inauguration, be holding its first meeting in Shanghai and Nanjing in the People's Republic of China, focusing on the unique situation of Chinese churches and ecumenical relations in the region.

The meeting will take place from 9 to 16 June, organized by the WCC Commission of the Churches on International Affairs (CCIA) and hosted by the China Christian Council (CCC) and the National Committee of the Three Self Patriotic Movement of the Protestant Churches in China. The CCC, with its 23 million members, is the largest member constituency of the WCC in Asia.

The WCC general secretary, Rev. Dr Olav Fykse Tveit will attend the meeting. This will be his first visit to China since he took office in 2010.

The main deliberations of the CCIA meeting will take place in Nanjing. This will include a seminar on "Understanding China" invoking diverse perspectives on market reforms and development in socialist systems, poverty eradication and environmental sustainability, China's religions and religious polices, churches in China and other themes.

"This is the fifty first meeting of the CCIA. The meeting will be a historic event as it is the first time since the inception of the WCC that an international ecumenical gathering will take place in China, and will be hosted by a WCC member church in China," said Dr Mathews George Chunakara, director of the CCIA.

The event will begin with meetings in Shanghai, with Sunday worship services in local Chinese congregations, followed by visits to experience urban and rural models of life in the context of modern China.

The final meeting of the CCIA in follow up to the WCC 10th Assembly, which will take place in 2013 in Korea, will discuss future programme directions and significance of international affairs in the ecumenical movement. This will also include discussions on priorities for public policy and global advocacy initiatives in the emerging geo-political situation.