Twelve Korean and international church leaders arrived in Pyongyang on 23 October for a meeting of the executive committee of the Ecumenical Forum for Peace, Reunification and Development Cooperation on the Korean Peninsula. 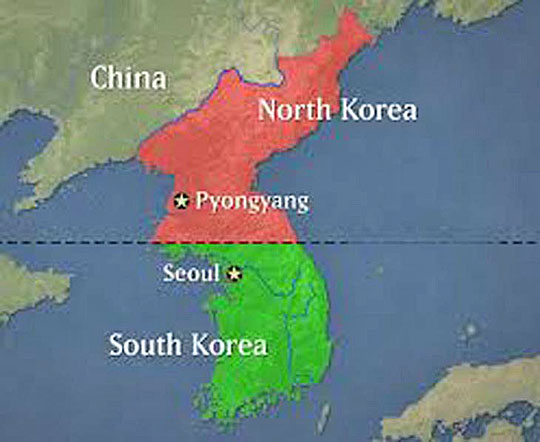 At the 10th WCC Assembly, held in Busan in 2013, the world churches resolved

to cooperate to realize peace and reunification on
the Korean peninsula.

In 2014, the WCC, NCCK and KCF met in Switzerland and agreed to hold the meeting this time in Pyongyang.

The East Asia liaison officer at Germany’s Evangelical Mission in Solidarity, Lutz Drescher, who is known for his deep concern for peace on the Korean peninsula, and Park Kyung-Suh, former UN ambassador for human rights are also on the visiting team.
The four-day forum, which began on the 26 October, will seek ways to develop solidarity among the churches related to NCCK, WCC and KCF for cooperation and support activities.

“The discussions will focus on how the world church can join in solidarity with the North Korean church and participate continuously in North Korean social development,” the Kukmin Daily b in Seoul quoted an NCCK source as saying.
The forum is likely to discuss the role of the churches in South Korea.

On 25 October, the visiting team members took part in Sunday worship at Bongsu Church and visited Pyongyang Seminary.
They will leave Pyongyang on October 30.

The Kukmin Daily said that next month there will be a large-scale meeting of religious figures from South and North Korea.
The Korean Conference of Religions for Peace, a consultative body representing seven religious organizations, will gather at Geumgangsan on 9-10 November for its South-North meeting of religious persons.

According to the Kukmin Daily reporters Narae Kim and Marion Kim, the recently-held reunions of divided Korean families and the visits of religious leaders may possibly open the gate to South-North civilian exchanges and stimulate improved relations between the divided Korean people.

Pyongyang, October 28 Juche 104 (2015) (KCNA) -- A meeting of the Steering Committee of the Christian International Forum for the peace and reunification of the Korean Peninsula and cooperation for development took place in Pyongyang Wednesday.

Present there were delegates from the Christian Federation of Korea, the World Council of Churches and those from Christian organizations of Canada, Germany, Britain, the U.S., and south Korea.

The appeal said that the participants in the meeting witnessed the reality in the DPRK which is advancing dynamically full of confidence despite the vicious moves to isolate and stifle the country and economic blockade, adding that the tension that almost went out of control was defused thanks to the north-south high-level urgent contact that was arranged at the initiative of the DPRK in last August. It pointed out that the political confrontation and threats still persist.

The appeal underscored the need for Christian organizations to wage a widespread campaign for the implementation of the June 15 joint declaration and the October 4 declaration, for a stop to the aggressive and provocative military exercises and the use of armed forces that harass stability and cause tension on the Korean Peninsula, for the lift of economic sanctions, for a stop to the act of abusing human rights issue for escalating confrontation and leaflet-scattering operations and other acts aimed at inciting hostility, for the replacement of the Armistice Agreement with a peace treaty and for supporting dialogue aimed at mutual recognition between the north and the south, peaceful co-existence and reunification.

The appeal also expressed concern over the advance of forces overseas by dint of Japan's "right to collective self-defence" and the re-interpretation of Article 9 of the Pacifist Constitution.