FUKUSHIMA — Last year's crop is still sitting in storage and deemed unsafe to consume, but Toraaki Ogata is busy planting rows of seedlings at his rice paddies in the city of Fukushima, continuing his family's proud, six-generation history of farming and praying he will be able to sell this autumn's harvest. 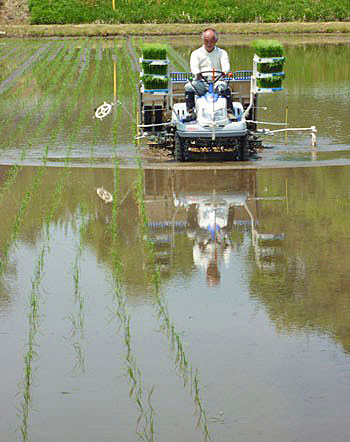 Seeds of growth?: Toraaki Ogata, whose entire crop was
contaminated by radioactive fallout last year amid the nuclear crisis,
plants rice seedlings May 21 in the city of Fukushima. AP

His concerns are shared by several thousand farmers cultivating more than 7,000 hectares in Fukushima Prefecture, where a lot of rice exceeded government limits on radioactive cesium due to fallout from the Fukushima No. 1 plant meltdowns.

Agriculture is one of the prefecture's largest sectors, but if local farmers are to sell their rice this year they will have to submit it for inspection first — every last grain.

"All I can do is pray there will be no radiation" detected, Ogata, 58, said last week at his 1.5-hectare paddy, situated about 60 km from the ruined power station in the eastern part of the city, where fallout spread when the crisis began. "Through no fault of our own, the land of our ancestors has been defiled."

Although many farmers can't return to their land because it lies too close to the No. 1 plant, others have been given the go-ahead to resume rice farming — even though it may ultimately be too contaminated to ship.

Still, hopes are high in Fukushima that they will rise to the challenge and somehow manage to grow cesium-free rice — despite the huge quantities of radioactive fallout that contaminated soil last year.

Based on orders from the government, they have sprinkled zeolite, a pebblelike material that traps cesium, and added fertilizer with high potassium levels in an effort to prevent seedlings from absorbing it through their roots as they grow.

Unfortunately, there was no time for such work in the chaotic aftermath of the Great East Japan Earthquake, and tens of thousands of kilograms of rice from the 2011 harvest were found to be too irradiated for sale. The government bought up contaminated produce, which remains stored in giant mounds.

After Ogata and other farmers in the area harvest their crops in October, it will be tested by highly sensitive machines able to detect even the tiniest traces of radiation.

Ogata said two key issues are troubling him: whether his crop will turn out to be cesium-free, and if the government will renew a system set up last year to buy and destroy irradiated rice if it is found to be contaminated again.

He also fears for his personal health, unsure which experts to believe. Scientists visit the prefecture on a regular basis to discuss the potentially harmful effects of radiation at municipal meetings, but some say tens of thousands may fall ill while others claim there will be no impact on their health whatsoever.

Radiation levels in Fukushima are expected to gradually decline each year, but Ogata and other farmers realize their predicament is going to be a long haul.

The 20-km no-go zone imposed around the crippled nuclear plant is still in place, and some 100,000 locals remain displaced, unable to return to their hometowns because of the crisis.

In Minamisoma, located right on the edge of the exclusion zone, 135 farms have been granted special permission to plant rice — but only on an experimental basis and on condition that all of the harvest, regardless of its cesium levels, is destroyed.

"We couldn't even plant seedlings last year," said Yukio Nishi, an official from an agricultural cooperative in the town. "We are doing everything we can as a community so we can start growing rice again next year."

In April, the government tightened limits on radiation in food produce to 100 becquerels per kilogram from the 500 becquerels maximum it imposed last March. The threshold is even lower for milk, baby food and drinking water.

Medical experts say even these steps won't fully eliminate the risks of consuming produce with low doses of radiation, and that it may be impossible to determine if future cancer victims contracted the disease from radioactive exposure or other factors.

Radiation exposure is measured in cumulative terms and its effect on health differs from person to person, depending on such variables as size, age, diet and daily habits. However, experts agree that children are more susceptible to radiation-related sicknesses.

"The government is trying to strike a balance between allowing residents to remain in the prefecture and start rebuilding their lives, and assuring consumers in the rest of Japan that food" products are safe, said Edward Lazo, a radiation expert from the OECD's Nuclear Energy Agency who is advising local authorities. "And that's a really difficult job."

But Christopher Clement, an expert at the International Commission on Radiological Protection, a U.K.-based global authority on the health impacts of radiation, claims food produced in Fukushima is safe. Standards in Japan are lower than those implemented by European governments after the 1986 Chernobyl catastrophe, he noted.

Given such conflicting advice, many consumers remain confused and concerned about agricultural produce from Fukushima and surrounding prefectures.

Last year, sales of vegetables and fruit from Fukushima on the Tokyo Metropolitan Central Wholesale Market were 20 percent down compared with 2010, data show. Masataka Kase, a spokesman for major wholesaler Tokyo Seika Co., blamed the decline on consumer fears over radioactive produce and government-imposed shipment bans due to excessive radiation levels amid the nuclear disaster.

York Benimaru stores are festooned with colorful banners encouraging shoppers to support local farmers and have clearly labeled shelves indicating products from Fukushima, although many just walk right past them.

But Ogata, the farmer, is not planning to market his rice to skeptical consumers. He intends to sell some of his roughly 10,000-kg harvest directly to customers who have relied on him for years — local families — and the rest to a local cooperative for distribution to businesses, including restaurants, that are more willing to buy rice from Fukushima.

Not everyone shares his hopes, though. A handful of farmers have given up on growing rice altogether, with some switching to flower production — a sector that doesn't require radiation checks. Others are suing Tokyo Electric Power Co. for damages arising from the nuclear crisis.

One farmer, Shoichi Watanabe, said he feels angry he even has to worry about the effects of radiation on his crops.

"See how still this place now is?" he asked, pointing to fallow paddies. "We would not be going through all this suffering if only Tepco had done its job correctly."