2010: What was Left Unsaid about the Atomic Bombings: Silence and the Politics of Commemoration

When Hiroshima commemorated the 65th anniversary of its atomic bombing on Aug. 6, representatives of the United States, Britain and France joined the memorial service for the first time. Their attendance made headlines.

As it happens, in 1948, three years after the bombing, the Hiroshima peace festival, as the ceremony was then known, was attended by a representative of the Allied Forces. I learned this from former Hiroshima Mayor Hiraoka Takashi a few years ago.

Wanting to find out more, I leafed through the archives of Yukan Hiroshima, an evening daily that is no longer in existence which was published by a Chugoku Shimbun affiliate, and found an article reporting the event. According to the article, Horace Robertson, commander-in-chief of the British Commonwealth Occupation Force, took part in the ceremony and gave a speech.

While praising Hiroshima's efforts to rebuild as a sign of determination for peace and goodwill, Robertson made reference to the destructiveness brought on by Japan's war of aggression that led to Hiroshima's annihilation, thereby clearly pointing a finger at Japan and holding it responsible for what happened. As the name, peace festival, shows, the ceremony, which was organized while Japan was still under occupation, was also an event aimed at stifling public anger toward the atomic bombings.

Supreme Commander of the Allied Powers Douglas MacArthur (1880-1964) also sent a message to the festival held the previous year. The gist was as follows:

The agony of that fateful day can serve as a warning to all people of all races. It is a warning that the use of natural power to augment the destructive capability of war will continue to advance and can eventually turn into a means to annihilate the human race and destroy the material structure of the modern world. This is the lesson of Hiroshima. God help us not to miss this point.

Although the message is philosophical in the way it describes the tragic nature of nuclear weapons in the history of the human race, I was surprised at the tone of aloofness coming from a representative of the country that dropped the atomic bombs.

U.S. Ambassador to Japan John Roos, who became the man of the hour in Hiroshima this year, left the venue without making a public statement. According to the U.S. Embassy, the visit was made "to express respect for all of the victims of World War II." The way it avoided the expression, "to mourn the victims of the atomic bombing," illustrates the complexity of the U.S. position. 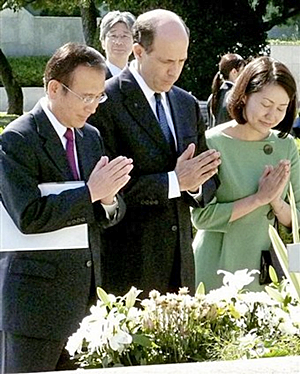 
The ambassador, who assumed his duties in August 2009, visited Hiroshima in October with his family and offered flowers to a cenotaph dedicated to A-bomb victims. He also said he was "deeply moved" by what he saw at the Hiroshima Peace Memorial Museum. No doubt the United States is exploring the possibility of a visit to Hiroshima by U.S. President Barack Obama. After all, it is Obama who stated that his goal is to achieve a world that is free of nuclear weapons.

In the 2003 documentary film "The Fog of War," former U.S. Secretary of Defense Robert McNamara (1916-2009), who took part in military operations against Japan during World War II, confessed that he considered the dropping of the atomic bombs "a war crime." There are some Americans who share that view. But U.S. public opinion is still dominated by the deep-rooted belief that the atomic bombings were the decisive factor that put an end to Japan's reckless war. The ambassador's silence speaks of this fact.

Some hibakusha A-bomb survivors who welcomed Roos said they have no intention of demanding an apology after all these years and look forward to Obama's visit. At the same time, however, like Hiraoka, others say hibakusha have not really forgiven the United States and that the president's visit would be meaningless unless the United States admits it made a mistake in dropping the atomic bombs. Which is true? Perhaps that is what Roos wanted to uncover.

Even if Obama is unable to offer an apology, can he at least admit the sinfulness of the atomic bombings? Can he offer heartfelt condolences to A-bomb victims and survivors and express a feeling of sympathy? I think that is how most Japanese feel.

It may be too early to raise hopes when the president's itinerary has yet to be decided. But all the more because he attaches great importance to his words, we cannot help but anticipate what lies beyond "the ambassador's silence."

U.N. Secretary-General Ban Ki-moon also attended the ceremony in Hiroshima for the first time. But unlike Roos, he met with many people and spoke at length. Personally, however, as a South Korean, he, too, must have decided against pouring out his innermost thoughts.

Ban visited Nagasaki first and then went on to Hiroshima. He met Korean hibakusha in both cities. Among them was Kwon Soon-geum, 84, who still runs a yakiniku Korean barbecue restaurant in Nagasaki even though her husband is now dead.

"I was so overwhelmed that I don't remember what we spoke about," Kwon said of her meeting with Ban. About 10 of her husband's friends, who were construction workers, died in the atomic bombing. The memory of that day is still vivid in her mind. Kwon herself also suffered from the aftereffects of the bombing. But she felt consoled when she touched Ban's soft hands, she said.

"I felt he held back his thoughts when I heard his speech," said Takazane Yasunori, director of Oka Masaharu Memorial Nagasaki Peace Museum. Takazane represents a citizens group, which has been supporting Korean hibakusha in Nagasaki. 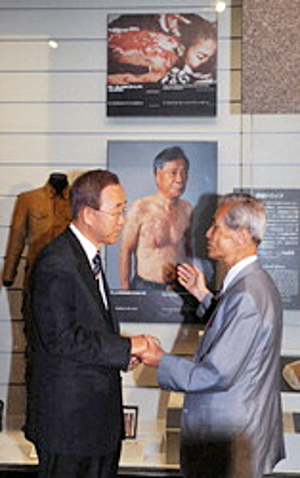 
During the war, many Koreans who were later killed or injured in the atomic bombings, were conscripted and brought to Japan against their will. They were dispatched to coal mines and factories where they were forced to work under harsh conditions. And then the atomic bombs fell.

The victims must have wanted Ban to speak about the double hardships they suffered, but he didn't. Instead, he expressed his gratitude to the mayors of both cities for making arrangements to erect monuments to commemorate the Korean victims. Ban probably knew the Nagasaki monument was built with donations from Nagasaki citizens. He said, as U.N. secretary-general and as a global citizen, he thought these monuments are proof of unity of all people around the world who face tragedy.

He must have also attached importance to showing courtesy to Japan. Maybe his passion for the abolition of nuclear weapons made him speak those words. But in any case, we must try to understand what he left unsaid.

With reference to the atomic bombings, the view that "Japan got what it deserved" is still deeply rooted in Korea and China. Both countries say Japan must not act only as a victim and forget the agony it caused them as an aggressor.

We must always keep this point in mind when we urge the world to understand the tragedy brought about by the atomic bombings. This is something I feel keenly once again in the summer that marks the centennial of Japan's annexation of Korea.

Wakamiya Yoshibumi is an Asahi Shimbun columnist and former editor.

This article appeared in The Asahi Shimbun on August 23, 2010.

Recommended citation: Wakamiya Yoshibumi, "What was left unsaid about the atomic bombings: silence and the politics of commemoration," The Asia-Pacific Journal, 34-1-10, August 23, 2010.