Former Prime Minister Naoto Kan has admitted that Japan was woefully unprepared for last year's nuclear disaster and suggested that the crippled Fukushima No. 1 plant should not have been built so close to a tsunami-prone coastline. 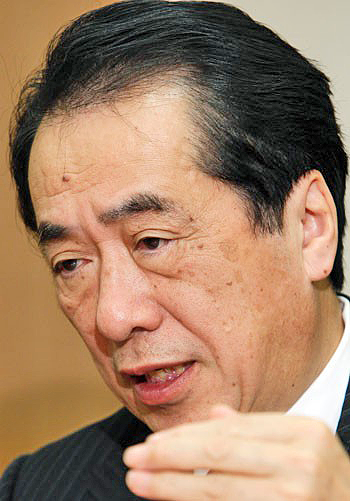 Straight shooter: Former Prime Minister Naoto Kan
is interviewed at his office in Tokyo on Friday.

In an exclusive interview, Kan acknowledged flaws in the authorities' handling of the crisis, including poor communication and coordination among nuclear regulators, Tokyo Electric Power Co.'s management and the government Kan was heading at the time.
But he said the disaster — the worst nuclear accident since Chernobyl in 1986 — laid bare a host of even bigger vulnerabilities in the nuclear power industry and its regulations, ranging from inadequate safety guidelines to crisis management, all of which he said need to be overhauled.

"Before 3/11, we were totally unprepared," he said. "Not only in terms of the hardware, but our system and the organization were not prepared. That was the biggest problem."
Kan said the disaster made him realize that Japan needs to dramatically reduce its dependence on nuclear power, which accounted for 30 percent of the country's electricity supply before the crisis, and has turned him into a believer in renewable energy.
He also acknowledged that information was sometimes slowly disclosed and at other times erroneous, particularly in the days immediately after the crisis started. He blamed a lack of reliable data at the time and denied the government ever hid any information from the public.

Kan said the very location of the Fukushima plant was problematic.
"If they had thought about it, they wouldn't have intentionally built it at such a low location," Kan said. "The plant was built on the assumption that there was no need to anticipate a major tsunami, and that was the actual start of the problem.
"We should have taken more adequate safety steps, and we failed to do so," he added. "It was a big mistake and I must admit that (the accident) was due to human error."
Early on in the crisis, Kan said he had considered the possibility of a worst-case scenario in which all six of the plant's reactors and rods in their spent-fuel pools would have melted down completely out of control. That probably would have resulted in radioactive fallout spreading over a wider area, requiring the evacuation of millions of people, including possibly the population of Tokyo.
But Kan said he never instructed officials to produce a blueprint for evacuating the 30 million people living in the greater Tokyo area, although an internal report submitted March 25 by the head of the Japan Atomic Energy Commission warned of such a possibility if the disaster deteriorated. Fearing panic, the report was buried and kept a secret.

"My mission was to stop (such an evacuation) from happening and to think how to do it," Kan said. "We were lucky to manage to get the crisis under control before things worsened."
He said the crisis was at its most dire stage around the time a third hydrogen explosion was detected at the Fukushima plant in mid-March. "Up until around March 15, we were losing ground to the invisible enemy," he said.
The Japan Times: Sunday, Feb. 19, 2012 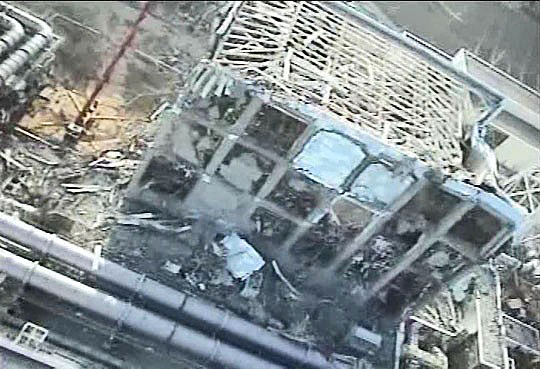 In December, Prime Minister Yoshihiko Noda announced the "conclusion" of the meltdown crisis at the Fukushima No. 1 nuclear plant, saying Tokyo Electric Power Co. was managing to keep the three crippled reactors cool, as well as the facility's spent fuel pools. 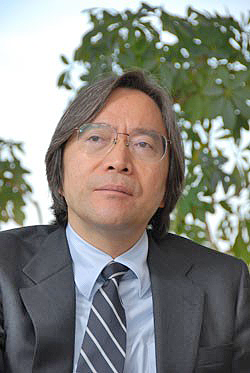 But a former special adviser to Naoto Kan, who was prime minister when the crisis started, warned that the situation is far from resolved and said Fukushima has exposed a raft of serious nuclear problems that Japan will have to confront for years.
"I would say (the crisis) just opened Pandora's box," Hiroshi Tasaka, who has a doctorate in nuclear engineering and is now a professor at Tama University, said in a recent interview with The Japan Times.
He was one of a select group who glimpsed the secret worst-case scenario document written up by the Japan Atomic Energy Commission on March 25 that was later reportedly quashed by the government.

According to the scenario, the biggest risk during the meltdown crisis wasn't the reactors themselves but the spent fuel pools sitting atop them, particularly the one above reactor 4, which still contains about 1,500 nuclear fuel assemblies, Tasaka said.
Unlike reactors 1, 2 and 3, the No. 4 unit was offline for regular checks when disaster struck on March 11 and thus didn't suffer a meltdown. But its fuel rods were in the pool outside the reactor, and its coolant water fell dangerously low.
Adding to the danger is that the fuel pool is now directly exposed to the outside environment after a hydrogen explosion blew off the upper part of the reactor building on March 15, Tasaka noted.
The potential heat from the pool was also much higher than other pools because 204 of the 1,535 assemblies were still "new ones" that had been temporarily removed from reactor 4 for regular checks.

The Fukushima crisis has highlighted the dangers of spent fuel pools, which are outside the robust primary containment vessels of the reactors themselves, Tasaka said.
Under the current circumstances, the nation has no prospect of starting up the experimental high-level nuclear waste processing facility in Rokkasho, Aomori Prefecture, because of both technical difficulties and the sentiments of antinuclear activists.
This means utilities must store their spent fuel assemblies in cooling pools at their respective reactor sites as a "temporary measure." This situation greatly increased the danger at Fukushima No. 1 on March 11.
"The storage capacities of the spent fuel pools at the nation's nuclear power plants are reaching their limits," Tasaka wrote in a new book, "Kantei Kara Mita Genpatsu Jiko No Shinjitu" ("The Truth About the Nuclear Accident as Viewed From the Prime Minister's Office").
According to Tasaka, the utilities' fuel pools were about 70 percent full on average in 2010, but the figure was 80 percent at Fukushima No. 1.

The makeshift cooling systems set up at Fukushima No. 1 to stabilize the stricken reactors and fuel pools have greatly reduced the possibility of another catastrophe, Tasaka said, but the ad hoc system for decontaminating the coolant water is nevertheless generating large amounts of highly contaminated waste every day.
Making matters worse, the government doesn't have any place to permanently store it, he wrote.
Tasaka is also deeply concerned about the "groundless optimism" displayed by bureaucrats and business leaders as they rush to restart dozens of reactors that remain halted for safety checks since March 11.
"I understand quite well the intentions of the government, which now wants to send out a message of hope. But at this stage, all the risks should be put on the table," he said.
The nation's nuclear regulators must carry out drastic reforms to regain the people's trust. This is an imperative for the government if it wants to keep pushing nuclear power, Tasaka said.

He recalled viewing the government's worst-case scenario in late March. He was officially appointed special adviser to the prime minister on March 29.
The document detailed a hypothetical Fukushima crisis worst case: Eventual contamination from the plant would require the government to assist residents in the Tokyo area to evacuate if they wanted to voluntarily "migrate," based on the same evacuation protocols adopted for the 1986 Chernobyl accident.
The scenario assumed another hydrogen explosion would occur in the reactor 1 building and radiation would force all of the workers at the plant to evacuate.
All of the pools storing hundreds of nuclear fuel assemblies would eventually lose their cooling ability and the assemblies would melt down and breach the pools.

According to Kyodo News, the simulation was "so shocking" that top government officials decided to keep the paper secret by treating it as a mere personal document of Japan Atomic Energy Commission Chairman Shunsuke Kondo, who compiled the simulation. The government only gave it official recognition at the end of December, according to Kyodo.
More than 10 months after he saw the worst-case scenario paper, Tasaka is still not sure if such scary information should immediately be made public during a nuclear plant crisis.
The assumed worst case was extreme and people did not need to immediately flee the Tokyo area even in March or April, Tasaka said. Disclosing the simulation could have caused panic in the capital, he said.

Tasaka was obliged to keep secret what he learned through his work at the prime minister's office and was not in a position to decide what information was to be made public during the crisis.
He said he decided to start talking about the worse-case scenario only after Kan mentioned some of its highlights during an interview with the media in September.
Tasaka believes the media and government should lay some ground rules in advance on what sensitive information should be made clear in a nuclear crisis.
The Japan Times: Wednesday, Feb. 8, 2012 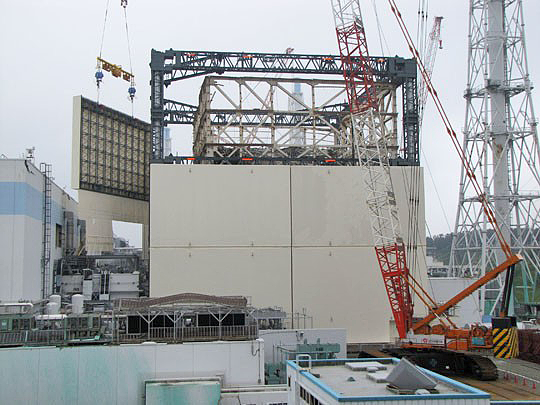 Eye-washing: A crane lifts a panel into place Thursday at the remnants of the No. 1 reactor building at the Fukushima No. 1 power plant. Tepco is putting a giant cover over the building — one of two ripped apart by violent hydrogen explosions early in the crisis — to contain its radioactive emissions. The enclosure is expected to be completed by the end of October. AP

In the days immediately after the crisis began at the Fukushima No. 1 nuclear power plant, the government received a report saying 30 million residents in the Tokyo metropolitan area would have to be evacuated in a worst-case scenario, former Prime Minister Naoto Kan revealed in a recent interview.
Kan said he contemplated the chaos that would ensue if such a measure were taken.
"It was a crucial moment when I wasn't sure whether Japan could continue to function as a state," he said.

After the March 11 earthquake and tsunami crippled the plant, Kan instructed several entities to simulate a worst-case scenario. One of those assessments said everyone residing within 200 to 250 km of the plant — an zone that would encompass half to all of Tokyo and cut clear across Honshu to the Sea of Japan — would have to be evacuated.
"I felt risk was at its highest during the first 10 days of the crisis," said Kan, who resigned earlier this month.
He also said that when the catastrophe struck, there were no effective safeguards in place because "we had never foreseen a situation in which a quake, tsunami and a nuclear plant accident would all happen at the same time."

As for Tokyo Electric Power Co.'s failure March 11 to vent the radioactive steam being generated by the plant's ailing reactors despite his repeated requests, Kan said that issue remains a mystery.
"Even the Tepco officials (who were with me) at the prime minister's office were unable to explain why they were not doing the venting, so I wasn't sure whether there was good communication between Tepco's head office and the Fukushima plant," he said.
Because of this, Kan said he decided to take action and go to the plant himself the next day. That was when Kan reportedly had a heated exchange with the on-site manager.
Later, a few days after returning to Tokyo, Kan heard March 15 that then Tepco President Masataka Shimizu wanted his staff in the Fukushima facility to evacuate.
Kan said he was outraged.
"I thought that was intolerable," he said. He subsequently rejected Tepco's request.
The Japan Times: Monday, Sep. 19, 2011