When German Chancellor Angela Merkel was in Japan earlier this month, local coverage focused on a joint German-Japanese statement about the Ukraine crisis and her comment that Japan should forthrightly address its actions during World War II. She said nothing about how Japan and Germany have diverged on nuclear energy, and reportedly she and Prime Minister Shinzo Abe didn’t discuss it with each other.

Germany decided to abandon nuclear power in 2011 as a direct result of the Fukushima No. 1 reactor disaster. The chancellor, a trained physicist, has said that her thinking was affected by the realization that such an accident occurred in Japan, which has a “high level of technology.” Asked by a German reporter during a joint news conference why Japan continues down the atomic path, Abe replied that with all of Japan’s nuclear plants idle the country has had to rely on imported fossil fuels for its energy needs. There is no way to provide an “inexpensive, stable” supply of energy except nuclear power generation, so once the safety of the nation’s reactors has been “assured,” they will go back online. 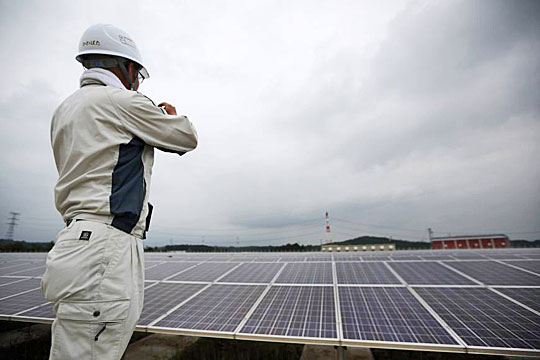 Later, when a Japanese reporter asked him why Japan didn’t follow Germany’s lead, Abe said that Germany can easily buy electricity from neighbors, whereas Japan cannot. By then, however, Merkel was gone, so her opinion couldn’t be solicited. By remarking on European energy interdependence, Abe meant to imply that despite its non-nuclear policy, Germany still gets power from nuclear-dependent France. What neither he nor the Japanese press mentioned is that Germany also has a concerted policy for promoting renewable energy.

There are varying opinions as to whether or not this policy is successful, but in Japan right now the story in the media is that renewables are not viable, if for no other reason than that the government has decided nuclear energy is more efficient for Japan’s long-term needs.

That much was made obvious on March 10, when the Ministry of Economy, Trade and Industry revealed that a subcommittee of experts had estimated that renewables such as solar and wind power would supply Japan with 20 percent of its energy needs by 2030. This figure has remained the same since the country’s Basic Energy Plan was formulated in 2001 by a group of politicians with close ties to the power industry, although later the government said it would endeavor to increase the portion. Now, METI has decided that renewables are too inconvenient, since facilities for transmitting electricity produced by renewable power structures would have to be built. According to the Asahi Shimbun, some members of the subcommittee “demanded” a greater effort to develop renewables. As one professor said, it wouldn’t be difficult to boost the portion to 30 percent, especially since some transmission capability will be freed up by the planned decommission of older reactors.

METI cited the cost to consumers as being another problem with renewables. Because of a law passed by the Democratic Party of Japan before its brief stint as ruling party ended in 2012, power companies are compelled to buy energy from anyone who generates it through renewable resources, and at an artificially high rate that is passed on to users. Starting last fall, power companies cut back on purchases of renewable energy, claiming they don’t have the capacity to handle it all, especially in Kyushu, where a number of businesses have built large solar energy farms.

What the government seems to be saying is that the plan to promote renewables was successful, but too much energy is being produced and the public still has to pay for it. Then there was a backlash and METI introduced measures to check power plant output in order to allow more solar energy to enter the grid. In any case, in accordance with sōkatsu genka regulations, large regional power companies are guaranteed a “rate of return” on their investment.

The monolithic nature of power utilities is the subtext of the 2010 German documentary “The Fourth Revolution,” which has been screened by civic groups throughout Japan in recent months. The film explains how “energy autonomy” is the next step in the evolution of industrial development. It is less concerned with renewables as the savior of the environment than with promoting solar and wind power as rational means of energy provision for everyone in the world.

Because private concerns control the finite resources that produce most electricity at present, energy is a commodity. The goal of the film’s subjects is local control of energy generation using renewable resources that aren’t owned by anyone. Private companies will do anything they can to prevent such a goal from being realized, but governments, which are supposed to guarantee the welfare of their people, should pursue energy autonomy with a sense of purpose, so the only obstacles are political, even if the gatekeepers of the energy market insist they are economic, that renewable energy is not yet and never will be viable enough to run factories and heat homes. The film shows how technology has advanced in Denmark and Germany to the point where whole towns can address their energy needs with renewables.

The movie’s message is especially relevant in light of next year’s liberalization of the Japanese energy market, something the power industry has resisted since it was first proposed by METI in the ’90s. According to a recent survey conducted by advertising firm Hakuhodo, 80 percent of the public are aware they can choose a provider next April, but aren’t sure what that entails. Neither the media nor the government has effectively explained the process, so consumers may end up defaulting to the big regional power companies, especially if they’re seen as being cheaper. What’s important to remember is that it’s not about nuclear versus non-nuclear — it’s about breaking free of entities that make those decisions for you.