Japan’s Dangerous Nuclear Waste on the Cutting Board?
Towards a Renewables Future

Japan’s Abe Shinzo government is commonly held to be in thrall to nuclear power, not least because it came into office in December 2012 committed to nuclear restarts and other policies promoted by the nuclear village. Yet clearly much has changed over the past three years. The Abe government’s repositioning on energy is evident in an accelerating shift away from support for the nuclear village, in spite of a few restarts, and towards an increasingly impressive commitment to energy efficiency and renewable energy. The evidence is striking: On top of proposing massive increases in its fiscal 2016 expenditures on energy efficiency and renewables, which we reviewed in October,1 the cabinet is about to undertake an administrative review targeting billions of yen in controversial nuclear-related expenditures.

Specifically, from November 11 to 13, 2015 Japan will undergo an administrative review of YEN 13.6 trillion worth of expenditure requests in the over YEN 102 trillion proposed budget for fiscal 2016. This “Fall Review” (Aki no rebyuu) will be open to the public and broadcast online, as was the case with previous administrative review processes.2 But among the many unusual aspects of this year’s initiative is that the review will be overseen by the resolutely antinuclear Liberal Democratic Party cabinet minister (since October 7, 2015) Kono Taro. Kono’s team of outside advisors will also include such explicitly antinuclear experts as the Japan Renewable Energy Foundation’s (JREF) Director Ohbayashi Mika3 and JREF Senior Research Fellow, Fujitsu Research Institute Research Fellow and Tsuru University Professor Takahashi Hiroshi.4 Kono and his colleagues in the LDP have been working hard in advance of the review to draw attention to its focus on nuclear-related expenditures, resulting in significant and steadily increasing press coverage. In addition, Kono has taken the apparently unprecedented step of producing a 1-hour video, released on November 9, to explain the process and its focus on nuclear-related expenditures. He prefaces his detailed arguments about the content of the review with (at the 5:50 mark) an unambiguous declaration that he not only cleared the substance of the review with Prime Minister Abe, but also received the latter’s encouragement.5

Please continue with the pdf 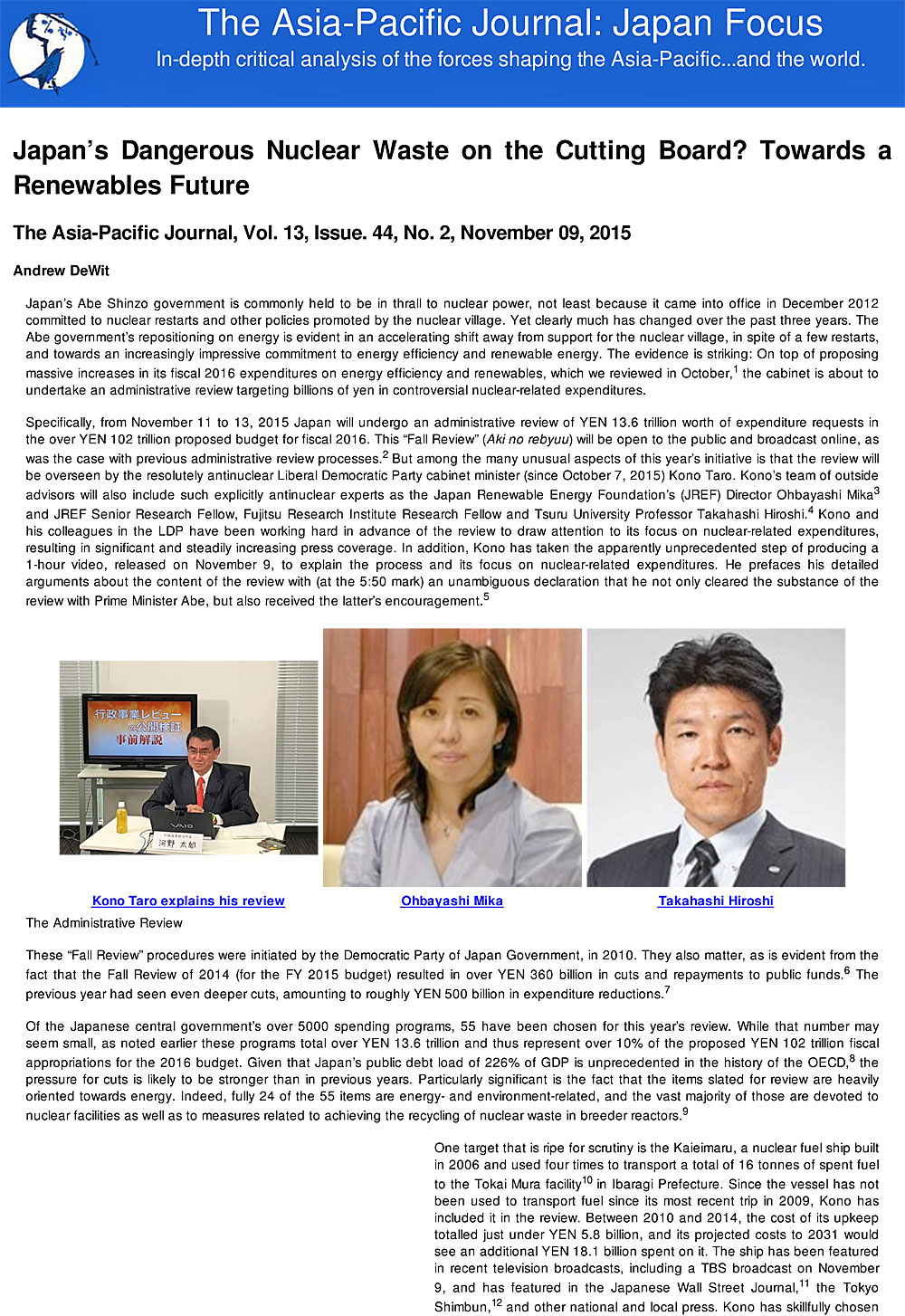