2015: From nuclear safety to nuclear security

From nuclear safety to nuclear security 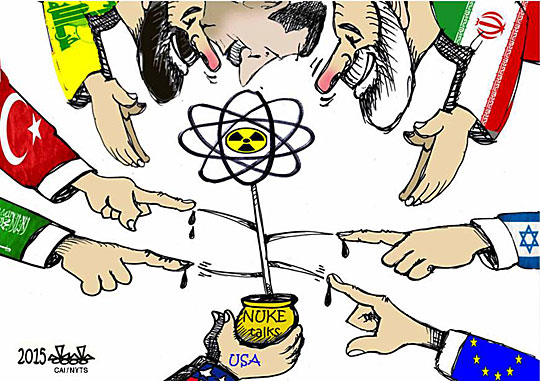 Four years ago, a devastating tsunami crashed into the coast of Japan. Waves 15 meters high breached the seawall of the Fukushima No. 1 nuclear power plant, cutting off its emergency power supply and disabling its cooling systems.

The nuclear accident was the worst since the meltdown of the Chernobyl power plant in 1986. Investigators concluded that one of the underlying causes was complacency: Those in charge of the facility believed that their safety systems were robust, and there was no effective independent oversight.

The disaster in Japan has spurred reforms in the field of nuclear safety. But when it comes to nuclear security, complacency remains a major problem. We must not wait until tragedy strikes to do something about it.

Today, well over 1.5 million kg of highly enriched uranium and plutonium — key ingredients for nuclear weapons — are dispersed across hundreds of facilities in 25 countries. Some are poorly secured. Yet enough nuclear material to fill a small bag is all it takes to construct an explosive device with the potential to kill hundreds of thousands of people and inflict billions of dollars in damage.

Much has been done to improve security at nuclear facilities in recent years, but governments must do more to protect their citizens from the risks of catastrophic nuclear terrorism. The lessons from the Fukushima crisis can serve as a useful guide for reform.

For starters, governments and industry must treat nuclear security as a process of continuous improvement and work to keep pace with evolving threats and challenges. A facility considered secure 20 years ago might now be vulnerable to a cyber attack that bypasses its security systems or confounds efforts to keep track of its nuclear material.

Well-organized and well-financed non-state groups, like the Islamic State group, may employ new tactics, technologies, and capabilities to steal nuclear materials. Governments must therefore consistently evaluate evolving technologies and threats so that security systems designed to protect nuclear materials stay ahead of the capabilities of those who would seek to steal them.

Second, governments and industry should make sure that security culture, like safety culture, becomes an integral part of every nuclear facility’s operations. As Gen. Eugene Habiger, a former commander-in-chief of the United States Strategic Command who was the U.S. Department of Energy’s “security czar,” once put it: “Good security is 20 percent equipment and 80 percent people.”

Governments and industry should work together to nurture a strong culture of security. Each and every employee at a nuclear facility — from guards to scientists to senior staff — must view the security of nuclear materials as an essential part of their jobs.

Third, governments must regularly review security systems at nuclear facilities. It is not sufficient for nuclear operators to say that the state of security in their facilities is “good enough.” Effective oversight can root out complacency.

Fukushima exposed the need for regulators to perform regular stress tests, evaluating the ability of nuclear facilities to stand up to various contingencies affecting their safety. Regulators should conduct similar evaluations aimed specifically at assessing facilities’ ability to withstand security threats, including theft by knowledgeable insiders.

Finally, world leaders should seek to establish closer forms of international cooperation on nuclear security. As Chernobyl and Fukushima demonstrated, nuclear safety vulnerabilities in one country can have profound consequences for the rest of the world. The same can be said of nuclear security risks.

We share a political — and moral — responsibility to ensure that terrorists never get their hands on the world’s most dangerous materials. Countries should draw on the example of the Nunn-Lugar Cooperative Threat Reduction program, a successful program of collaboration on nuclear security among the U.S., Russia and ex-Soviet states. Countries with nuclear materials should exchange information on how best to bolster security, increase intelligence-sharing on common nuclear-security challenges, and explore the possibility of conducting peer reviews.

Our friend and colleague Sam Nunn, co-chairman of the Nuclear Threat Initiative, often warns that we are in a race between cooperation and catastrophe. It is important that we learn the lessons of Fukushima and incorporate them into our strategy to combat nuclear terrorism. This is one race in which we cannot afford to fall behind.