The Maritime Self-Defense Force commissioned its largest-ever helicopter carrier Wednesday in Yokohama as officials denied that the massive vessel could be used as a conventional aircraft carrier or represents a prototype for one in the future. 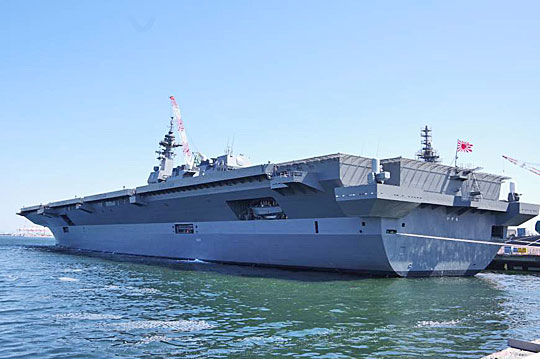 The 248-meter Izumo, which has a displacement of 19,500 tons and is officially classified as a “helicopter destroyer,” resembles an aircraft carrier at first glance.

It has a flat flight deck with a single superstructure, which contains the bridge. The deck is large and robust enough to permit the operation of Osprey tilt-rotor aircraft, MSDF officers said.

The U.S. military has deployed Ospreys in Japan and the Ground Self-Defense Force is considering procuring the aircraft.

Addressing reporters after the commissioning ceremony in Yokohama on Wednesday, Defense Minister Gen Nakatani emphasized that the ship is designed to carry patrol helicopters, not fixed-wing aircraft such as fighter planes.

“We are not thinking about using this as an aircraft carrier,” Nakatani said.

For years, the government has interpreted the war-renouncing Constitution as allowing Japan to possess the minimum necessary forces for self-defense, not offense. This means the nation is not permitted to operate aircraft carriers designed to attack foreign adversaries, the government has said.

Still, experts and media outlets in China and South Korea have speculated Japan may be aiming to operate such an aircraft carrier without declaring it as such.

Nakatani pointed out that the Izumo doesn’t have a runway from which multiple airplanes can take off. It also lacks the hangers and workshops needed to service airplanes.

Instead, it is equipped with equipment for nonmilitary rescue missions, such as surgical theaters and rooms to accommodate evacuees and aid supplies, Nakatani said.

Military experts support this view, saying the vessel would require a comprehensive refit before it could operate jet fighters or other attack airplanes.

The Izumo is the first ship in the Izumo class of helicopter carrier. It can carry seven anti-submarine patrol helicopters, plus two rescue and transport helicopters. Its total crew will number 470.

The ship took three years and two months to build at a cost of ¥120 billion. Its home port will be the MSDF base in Yokosuka, Kanagawa Prefecture.

In a speech to the crew, Nakatani said he believes the Izumo will greatly enhance the MSDF’s capabilities to cope with military threats and contingencies as well as contribute to international peace-keeping and overseas rescue missions.

“In reality, now no country alone can maintain peace and safety on its own,” Nakatani said as crew members stood on the flight deck.

For Japan, “it’s more important than ever to actively contribute to peace and stability of the world,” he said.

The MSDF’s previous largest helicopter carrier was the Hyuga class, at 197 meters in length and with a displacement of 13,950 tons.

The Hyuga class can carry three patrol helicopters and one rescue and transport helicopter, according to the MSDF.

Asked why Japan requires a helicopter carrier larger than the Hyuga class, Nakatani said a larger ship is needed to accommodate facilities and equipment for joint operations involving the air, ground and maritime branches of the Self-Defense Forces.

“With joint operations, we can more quickly and flexibly cope with situations,” he said. “The ship should have command functions for such an operation. That’s why (the Izumo) must be this large.” 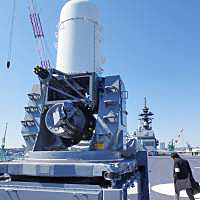 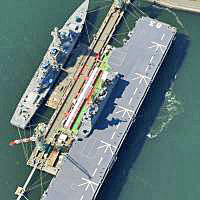