Deepening Resistance and Refusal - US Bases in Crisis

Shinjo Ikuo, introduction by Gavan McCormack
In September 1995, the Okinawan problem in its present acute form originated from the rape of a 12-year old school girl by three US servicemen. The prefecture galvanised in fury and elicited a pledge the following year from the two national governments that Futenma Marine Air Station would indeed be returned “within five to seven years.” Sixteen years on, there is no sign whatever of that happening; instead Futenma’s runways are reinforced, the base’s military functions upgraded, and plans for a new (“substitute”) base in the north, at Henoko, are pressed forward in the face of islandwide opposition.
“Futenma” and “Henoko” were the major focus of the Okinawan struggle during the decade and a half that followed. Now they are joined by “Osprey.” During the environmental impact study required for the Henoko project, the government of Japan deliberately withheld any mention of the planned impact of an entirely new type of aircraft that the Pentagon planned to introduce, the MV22-Osprey (VTOL, or vertical take-off and landing) aircraft, eventually informing Okinawan local government of it by a cursory one page fax in 2011. The Osprey is not only a significant upgrade on existing helicopters, twice as fast, carrying three times as much load, and with an operational radius four times greater, but it also has a poor safety record, including two crashes and one emergency landing just in 2012. Okinawan outrage grew. All 41 of the prefecture’s city and town and village assemblies, and the Okinawan parliament (the prefectural assembly), passed resolutions of opposition, and 101,500 people gathered in a mass meeting in September 2012 to make clear that the prefecture spoke with one voice. Yet the two governments were undeterred. 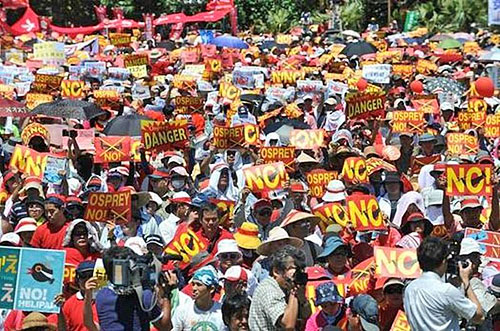 “No!” placards during September 9 anti-Osprey Rally
With all other avenues exhausted, Okinawans resorted to the direct action (referred to below) by sitting in at the Futenma camp gates late in September. The Ospreys, however, were delivered, and took to the Okinawan skies from 1 October.
On 16 October, while the prefecture still seethed over the Osprey being thrust thus violently upon it, another rape – of an Okinawan woman by two sailors - was reported. It was reckoned to be the 130th rape or attempted rape by US servicemen in the 40 years since Okinawa reverted from the US to Japan. Since many go unreported, the actual figure is presumably much greater. As in 1995, Okinawa exploded in anger. Again, the US government and Pentagon officials bowed in apology, promising it would not happen again. Two weeks after they had imposed an 11 pm curfew, and promised better moral guidance for the soldiers, at around 1 am on 2 November, a blind drunk sailor made his way into the 3rd floor bedroom of a 13 year old Okinawan boy, assaulted him violently, and then fell to the street below.
The Osprey imposition and the latest rape and intrusion incidents reinforced in Okinawan minds the seamlessness and violence of the base system; neither streets nor skies were safe. They seem to have concluded, as Professor Shinjo makes clear below, that the politics of bases is also the politics of rape and violence, and that the only way to stop crimes by American soldiers is by closing the bases. For many Okinawans that now means all the bases, nothing short of the demilitarization of Okinawa. (GMcC)

Deepening Resistance and Refusal – US Bases in Crisis