A single sentence buried among 7000 pages of documents recently released by the Pentagon might well be the needle in the haystack that conclusively proves the U.S. military stored toxic herbicides, including Agent Orange, on Okinawa during the Vietnam War. American veterans have long claimed that large volumes of these chemicals were present on the island and hundreds of them are suffering from serious illnesses they believe were triggered by their exposure. But the U.S. government has repeatedly denied their allegations, insisting it has no records related to the issue.1

Now it seems the Pentagon's denials might not have been entirely correct.

In September 1971, U.S. Army Fort Detrick, Maryland, the center for the Pentagon's bio-chemical weapons research, produced a report titled "Historical, logistical, political and technical aspects of the herbicide/defoliant program." The document summarized the military's usage of these chemicals during the Vietnam War and among the locations cited is a reference to "Herbicide stockpiles elsewhere in PACOM-US (Pacific Command) government restricted materials Thailand and Okinawa (Kadena)." 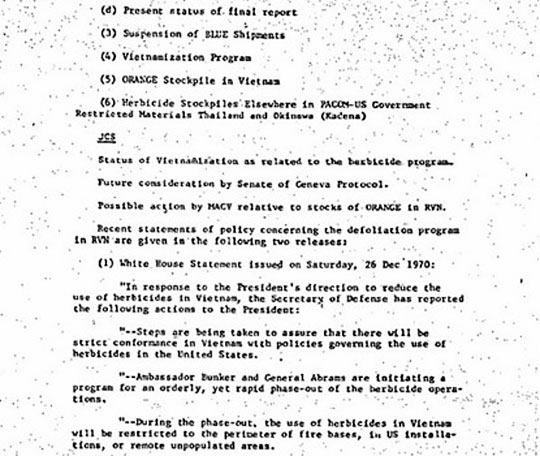 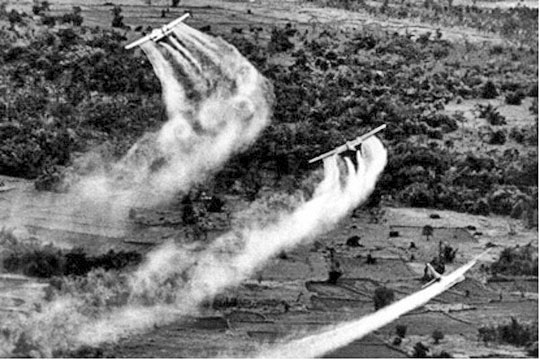 The U.S. government already admits that it stored military herbicides in Thailand during the Vietnam War but it denies their presence on Okinawa.2 At the time, Kadena Air Base (located near present-day Okinawa City) served as the Pentagon's key supply hub through which weapons and ammunition were flown to the conflict in Southeast Asia.

The Fort Detrick report was among a cache of U.S. Army documents declassified in October 2012 under the Freedom of Information Act at the request of Steve House, one of the veterans at the center of the 2011 investigation into the burial of Agent Orange in South Korea. House discovered the reference to Kadena along with Michelle Gatz, a Minnesota-based veterans services officer who has been researching herbicide usage on Okinawa.

"While I am sure the U.S. government will try to discredit the report, it will help to prove veterans' claims that they were exposed to herbicides on Okinawa," Gatz said. "It might even be enough proof for them to receive government benefits for the health problems they're suffering."

Fort Detrick drew up the report in response to a 1970 Washington ban on the military's usage of Agent Orange due to evidence that the defoliants the Air Force had been spraying in Vietnam for almost a decade caused birth defects.

The Fort Detrick report chronicles the military's confusion as to how best to dispose of its surplus stocks of millions of liters of herbicides following their prohibition. Some of the proposals floated in the report include using the toxic defoliants in "undeveloped nations" under the auspices of U.S. aid programs or "burial in soil pits or settling ponds." The latter suggestion will be of particular concern to Okinawa residents since U.S. veterans stationed on the island have claimed such burials of unwanted herbicides took place on Futenma Air Station3 and on former military land in Chatan Town.4

According to experts, the dioxins contained in the U.S. military's herbicides can contaminate the ground for decades and cause serious harm to people living nearby. In Vietnam, the land where the U.S. military stored Agent Orange during the war remains dangerously polluted and the Vietnamese Red Cross estimates that approximately 3 million people are suffering from the effects of exposure to these chemicals.5

The discovery of the Fort Detrick document comes soon after the release of another American military report implicating the Air Force in the storage of Agent Orange on Okinawa. "An Ecological Assessment of Johnston Atoll", stated the U.S. Air Force transported 25,000 barrels of Agent Orange from Okinawa to Johnston Island in the North Pacific for disposal in 1972.6

When confronted with the Johnston Island report in September 2012, Washington was quick to distance itself from the contents. It told the Japanese Ministry of Foreign Affairs that it had reinvestigated its own records and come to the conclusion that "the description that '[Herbicide Orange] was stored in Okinawa' is inaccurate and contradicts with the facts that the U.S. government acknowledges." In reply, the Japanese government stated it believed the U.S. explanation and it has been reluctant to pursue the matter further.

Kawamura Masami, Environmental Justice Director of Citizens' Network for Biodiversity in Okinawa, the NGO calling for a full investigation into Agent Orange usage on the island, is unconvinced by Washington's reply to Tokyo.

"For many years, the U.S. government had been saying there were no documents related to herbicides on Okinawa. But in August the Johnston Island ecological assessment turned up and their reaction was to call it inaccurate. Now this new report has been uncovered. Will they try to say it is inaccurate, too?" Kawamura said.7

When asked for comment for this article, Lieutenant Colonel David Honchul, Director of Public Affairs at United States Forces Japan reiterated the Department of Defense's commitment to investigate allegations of Agent Orange on Okinawa.

As to the latest Kadena allegations, he declined to comment in detail about the Fort Detrick report but concluded, "It doesn't change our position that there is no documentary evidence that Agent Orange or similar herbicides were ever used in, stored on, or shipped through Okinawa."

Kadena Air Base remains the largest U.S. Air Force installation in the Pacific - home to approximately 22,000 service members, their families and civilian contractors. 180,000 people live in the surrounding municipalities of Chatan, Kadena and Okinawa City.

Compounding fears that Kadena Air Base and its environs may still be contaminated by dioxin is the frequency with which it has been tied to allegations of Agent Orange usage. In August 1966, a team of U.S. military technicians visited the installation to train service members and Okinawan base personnel in the use of herbicides. In 1970, C-123 aircraft, the planes specially adapted to spray Agent Orange in Vietnam, were brought to Kadena to undergo cleaning and maintenance.8

Records obtained from the U.S. Department of Veterans Affairs, the agency tasked with assisting former service members sickened in the line of duty, contain numerous assertions of exposure to Agent Orange at Kadena in the 1960s and '70s. In 2011, for example, a former Air Force mechanic stated that during the Vietnam War, there were 100 barrels of Agent Orange and other herbicides on the base where they were also sprayed "freely and broadly." The veteran claimed that he was suffering from illnesses related to his exposure but the VA denied him assistance citing "the Department of Defense reported Agent Orange was not used, tested, stored, or transported in Okinawa." 9

Jon Mitchell is a Welsh-born writer based in Japan and an Asia-Pacific Journal associate. In November 2012, "Defoliated Island", a TV documentary based upon his research into the U.S. military's usage of Agent Orange on Okinawa was awarded a commendation for excellence by Japan's National Association of Commercial Broadcasters. The English version can be watched here. An earlier version of this article appeared in The Japan Times on January 12, 2013.

• Jon Mitchell, Agent Orange at Okinawa's Futenma Base in 1980s

• Roger Pulvers and John Junkerman, Remembering Victims of Agent Orange in the Shadow of 9/11

1 For a comprehensive introduction to the U.S. military's usage of Agent Orange on Okinawa see here

7 See here for a Japanese-language TV report on a follow-up meeting between MoFA and Citizens' Network for Biodiversity in Okinawa. The NGO's homepage can be accessed here