2016: Grassroots Struggle in US and Okinawa

Grassroots Struggle in the US and Okinawa: The Visible and the Invisible

Who could fail to be deeply moved on watching the recent events at Standing Rock, North Dakota, when on December 4 the Army Corps of Engineers ordered a halt to the planned construction of an oil pipeline beneath the waters and soil of the Standing Rock Sioux Tribe following months of confrontation and attempts by the American state, bolstered by private security firms, to evict the “water protectors” encampment by force and to crush the resistance?1

The security firms, also present in such spots as Iraq and Afghanistan thanks to government contracts, protect the Dakota Access pipeline for Energy Transfer Partners, which is supported by loans from, among other banks, Bank of Tokyo Mitsubishi UFJ and Mizuho Bank.2 Presidentelect Trump, reported to have a stake in the company, has made clear his support for the project.3 The resistance, beginning with a tiny group of tribal youth,4 fired by determination to protect sacred soil and water and armed with social media skills, eventually joined by cascades of indigenous peoples and environmentalists from throughout the continent, received a dramatic reinforcement in the eleventh hour in the form of veterans from all branches of the U.S. military. Many came in fatigues, but unarmed, to honor the principle of nonviolence declared by the Standing Rock leadership and to help them protect “our water, our sacred places, and all living things.”

Many referred to the oath they had taken when they entered the military, to defend the Constitution and the American people from “enemies foreign and domestic.”5 Wesley Clark, Jr., co-organizer of the group Veterans Stand for Standing Rock, is the son of the former Supreme Allied Commander Europe of NATO. He was a first lieutenant in the Seventh Cavalry, a unit established in 1866 to assist in America’s westward expansion, most particularly by protecting white settlers from real and perceived threats from Native Americans. It was a 19th-century version of his unit’s uniform that Clark wore for the forgiveness ceremony at Standing Rock on December 4.

The speech of apology he delivered that day will go down in history for its simple eloquence. “We took your land …. We didn’t respect you…” he said, kneeling before Chief Leonard Crow Dog.6 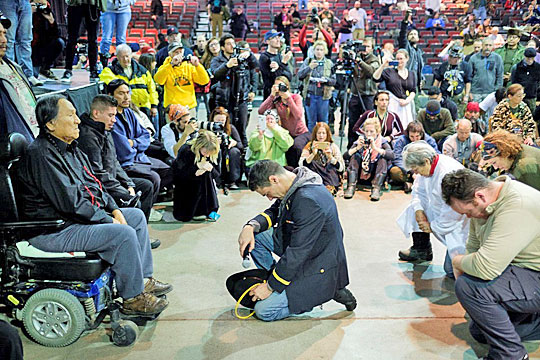