The standoff over construction of a replacement facility for the U.S. Marine Corps Air Station
Futenma threatens to develop into an all-out legal battle between the Abe administration and
Okinawa Prefecture as the national government ignores the local governor’s order to halt seabed
drilling off Nago to reclaim land for the planned new U.S. military airfield. The administration
should stop and think if such a confrontation — which would further complicate its relations
with the prefecture that hosts the bulk of the U.S. military presence in Japan — would be a wise
choice for the nation and its security alliance with the United States.

Gov. Takeshi Onaga, who was elected in November on a promise of halting Futenma’s relocation
to the Henoko district off Nago in the northern part of Okinawa Island, ordered the Okinawa
Defense Bureau — a part of the Defense Ministry — on March 23 to stop the work that changes
the shape of the seabed, including the drilling, within a week on the grounds that concrete
blocks sunk by the bureau outside the designated area — where permission had been given for
breaking underwater rocks and coral reefs needed for the drilling and reclamation — had
damaged coral reefs.

The governor warned that the prefecture would withdraw the permission for breaking
underwater rocks — issued by his predecessor, Hirokazu Nakaima, in August — if the bureau
refuses to comply. But the national government continued its work off Henoko and filed a
complaint seeking to invalidate the prefecture’s order, calling it “gravely and obviously illegal.”

The Abe administration, apparently confident that it stands on solid legal grounds based on the
prefecture’s approval given under Nakaima, seems ready to take the case to court if Onaga in
fact cancels the go-ahead given by his predecessor.

The relocation of Futenma — agreed on between Japan and the United States in 1996 — was
supposedly meant as a step to alleviate Okinawa’s burden of hosting roughly 75 percent of the
bases solely used by the U.S. military in Japan, in the wake of a flare-up in anti-bases
sentiments triggered by the rape of a local schoolgirl by three American servicemen the
previous year. The promise to return the Futenma site to Japan, however, was given on
condition that a replacement facility would be build also on Okinawa.

The Abe administration insists that building the new facility in Nago is the sole solution to
removing the dangers posed by the Futenma base, which is located in a densely populated area
of Ginowan in central Okinawa. Opponents of the plan say building a new U.S. military facility
on the island would not reduce the burden on the prefecture.

The administration says it is proceeding with the reclamation work on entirely legitimate legal
grounds. But the problem is that the approval for the reclamation work given by Nakaima in
2013 stands on shaky political grounds. His go-ahead for the plan contradicted a campaign
promise in his re-election as governor in 2010 that he would seek to have the Futenma base
relocated to outside of Okinawa.

The flip-flop, which came right on the heels of Abe’s promise of hefty government spending to
promote Okinawa’s economy, angered local voters and cost him the governor’s job in
November. Opponents of the relocation to Henoko also won the Nago mayoral race in January
last year and swept the Lower House seats in Okinawa’s four constituencies in the December
general election.

While the Abe administration has said it seeks Okinawa people’s understanding for the Futenma
relocation, it does not seem deterred by the local voters’ will against the plan expressed in the
elections. It began the seabed drilling last August — just as the prospect of Nakaima’s defeat in
the November election loomed — and officials of the administration kept repeating that the
work would proceed irrespective of the election outcome.

The drilling work resumed earlier this month despite the call by Onaga that the work be
suspended while the prefecture reviews the legitimacy of the approval given by Nakaima. The
administration, meanwhile, continues to give a cold shoulder to the new governor, denying him
meetings with Abe or Chief Cabinet Secretary Yoshihide Suga when he visited Tokyo several
times since taking office.

The Abe administration may think that the Okinawa governor will eventually back off, and local
opposition will ease off, once it surges forward with the Henoko construction. It apparently
hopes that proceeding steadfastly with on the Futenma relocation — which has been a thorn in
the neck of Japan’s relations with the U.S. for nearly two decades — will contribute to
solidifying the bilateral security alliance. There may be no time for the administration to slow
down especially as Abe prepares a visit to the U.S. in late April.

But the government should consider whether the chilly relations with Okinawa — much less an
all-out confrontation — and forcing the relocation over the opposition from the local
administration and voters will in fact contribute to the stability of the security alliance. It should
also question whether a plan rejected by so many local people truly serves the interests of
Okinawa — which is supposed to be the very purpose of the Futenma relocation.

Gloves come off over Futenma base move 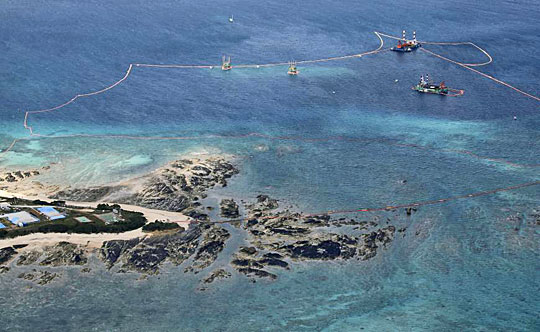 The showdown started when Onaga on Monday ordered the defense bureau to cease all work until the end of the month, as the prefectural government wants to survey coral reefs outside the designated work area. Local authorities believe the reefs have been damaged by concrete blocks installed by the bureau as weights to which marker buoys will be attached.

The agriculture, forestry and fisheries minister has the ultimate authority over the issue, as the work was approved last August by Onaga’s predecessor, Hirokazu Nakaima, in line with prefectural fishing regulations that are overseen by the ministry.

Hayashi will likely make an announcement Monday, the sources said.

The move comes a day after the governor submitted to the ministry a document to justify his order.

It was also a counterargument against a complaint filed by the defense bureau seeking to invalidate the order relating to its work off the coast of the Henoko district of Nago, which was selected to host the Futenma relocation facility. The base is currently situated in a densely populated residential area of the city of Ginowan.

According to the sources, Hayashi views the bureau’s complaint as having more validity than the governor’s order.

If the order is nullified, the bureau will continue the work. The focus would then shift to what the governor’s next move might be, as he has warned he might revoke the prefectural government’s permission, granted during Nakaima’s governorship, for the bureau to carry out the work.

On Saturday, Onaga blasted the latest central government attempt to move forward the base relocation despite local protests. At a meeting in Naha attended by Diet members of opposition parties elected from Okinawa, he said, “I hope all of us can generate momentum to prevent the construction of a new base in Henoko.”

Onaga, a former mayor of Naha and an opponent of relocating the Futenma base within the prefecture, won Okinawa’s gubernatorial election last November, ousting Nakaima in the process.

The Okinawa Defense Bureau, an arm of the Defense Ministry, called Onaga’s order Monday “illegal,” saying the coral damage is not at a level that would be regulated by the prefecture. Onaga insisted the complaint filed by the bureau was “unlawful and should be rejected.”

Okinawa is home to around three-quarters of the U.S. military installations in Japan and the Futenma relocation has been a politically and emotionally divisive issue for nearly two decades. Anti-military sentiment runs deep in Okinawa and many residents want the U.S. military presence reduced.

In Washington meanwhile, a senior U.S. defense official on Friday defended the planned relocation of Futenma to the Henoko area.

Speaking at the Center for Strategic and International Studies think tank, David Shear, assistant secretary of defense, called the relocation plan the “best” option from the viewpoint of military operations and, he claimed, in terms of benefiting the people of Okinawa.

Shear said he was “heartened” by statements by Prime Minister Shinzo Abe and other leaders in Japan that the current plan is the only solution for moving the Futenma air station out of Ginowan.

Shear commended Abe’s government for being committed to seeing the relocation plan “through.”

At the same event, Masahiko Komura, a close aide of Abe’s in the ruling Liberal Democratic Party who arrived in Washington last week, promoted Tokyo’s efforts to take the security alliance with the United States to a global level.

“The scope of today’s Japan-U.S. alliance is not limited to Japan’s vicinity. Our alliance has become global, underpinning (the) peace and prosperity of the international community,” Komura, vice president of the LDP, said in a speech.

He voiced hope that Abe’s upcoming visit to the United States will help take the bilateral alliance “to a new level.”